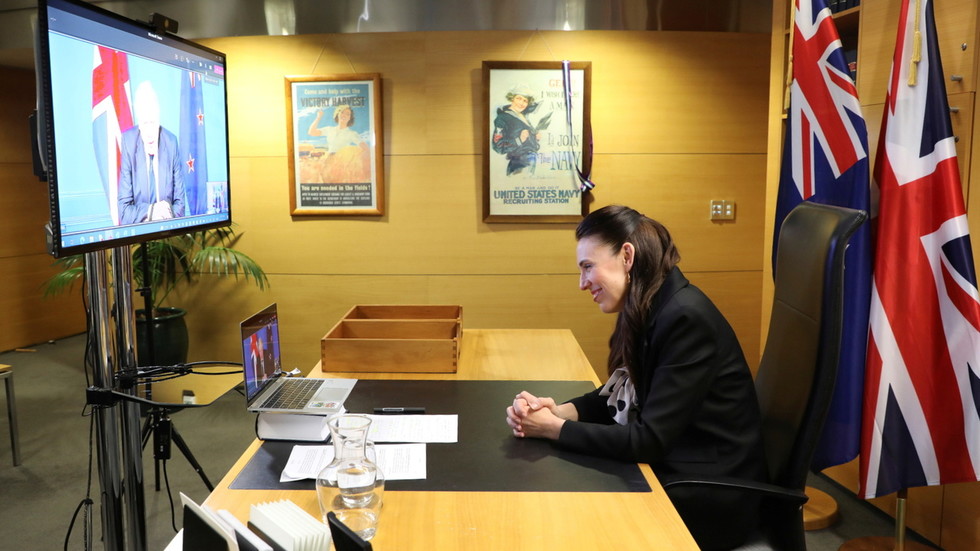 UK & New Zealand agree to free trade deal, overcoming historic Kiwi grudge, but some question whether Britain gets enough from it

The UK has sealed its second post-Brexit free trade deal, deciding to free up commerce with its former colony, New Zealand. Both sides see it as a win-win bargain, though some believe the Pacific nation gains more from it.

The deal was agreed in principle by British Prime Minister Boris Johnson and his New Zealand counterpart, Jacinda Ardern, in a Zoom call on Wednesday. It will be finalized and ratified by the two nations before it comes into force, which is expected to happen before the end of the year. The negotiations took 16 months and ended almost two months after the target date, so it remains to be seen if the timeline holds.

The treaty is the second trade deal the Johnson government has sealed since Brexit. A similar arrangement was agreed in principle with Australia this summer.

In a sense, the pact with the Kiwis circles back to the 1960s, before the UK joined the European Economic Community (EEC), Europe’s common trade market, which resulted in it downgrading its trade relationship with Wellington.

The New Zealand public’s attitude towards the UK took a big hit as a result of the 1973 divorce, as many people felt betrayed and abandoned by the country’s ex-metropole and then-biggest trade partner. While it was just one factor in a painful realignment of the New Zealand economy in the 1970s and 1980s, the grudge still lives on among some older Kiwis.

The new deal is unlikely to turn New Zealand back into Britain’s “farm in the Pacific,” as former British prime minister Harold Macmillan called it back in the day, or at least not instantly. Wine, one of the primary export articles, will be among the products that will see the lifting of tariffs from day one, along with about two-thirds of all Kiwi exports to the UK by volume. But other primary farmed goods will have to wait for up to 15 years for full liberalization.

The longest pause will be applied to sheep meat and beef. The UK will be setting increasingly large tariff-free import quotas for those products over a decade and a half. Dairy products like butter and cheese will see full access to the British market five years after the deal comes into force with a similar quota transition, while exports of mussels and apples will have a three-year grace period.

The gradual transition is meant to protect British farmers from their export-oriented competitors in New Zealand. No such provisions will be applied to any British goods, which will see trade tariffs lifted in full as soon as the deal is implemented.

Johnson and Ardern hailed the deal as historic and beneficial to both nations. The Twitter account of the British leader went with some lighthearted emojis as it shared a video showing him and his counterpart bringing “the ball over the line”, as Johnson called it.

His office said the deal would be good for all parts of the UK since it would give better access to New Zealand’s market to Scottish bankers and insurers, Welsh carmakers and Northern Irish textile producers.

Ardern stressed that the agreement included special provisions for climate change, with the UK agreeing to “take concrete steps to eliminate subsidies on fossil fuels,” and had new prohibitions to prevent overfishing. It also provides for cooperation on issues important to New Zealand’s indigenous population, her office said.

Meanwhile, skeptics pointed out that the British government’s own analysis expects the immediate impact of the deal on the nation’s GDP to be negligible. New Zealand is a relatively unimportant destination for the UK, accounting for less than 0.2% of its foreign trade and ranking 53rd by trade volume. For comparison, the UK is New Zealand’s seventh-largest trading partner and is projected to boost its exports by 40% over 15 years.

The British cabinet highlighted the agreement’s less tangible benefits, like facilitating mutual businesses by cutting through various restrictions. It’s also seen as a stepping stone for the UK to join the Comprehensive and Progressive Agreement for Trans-Pacific Partnership (CPTPP), an 11-member free-trade bloc.

There is also the geopolitical consideration in Britain’s economic pivot to the Pacific. New Zealand’s current biggest trading partner is China. In January, Wellington and Beijing upgraded their 2008 free trade deal, with the Chinese side saying the move exemplified its pursuit of multilateralism.

Britain is firmly on the side of the US in its ongoing great power competition with China. In September, the two formally joined forces with Australia by forming the AUKUS security alliance. It came with a side deal for the supply of US-built nuclear-propelled attack submarines to Australia, which canceled a previous agreement with France to take the American offer.