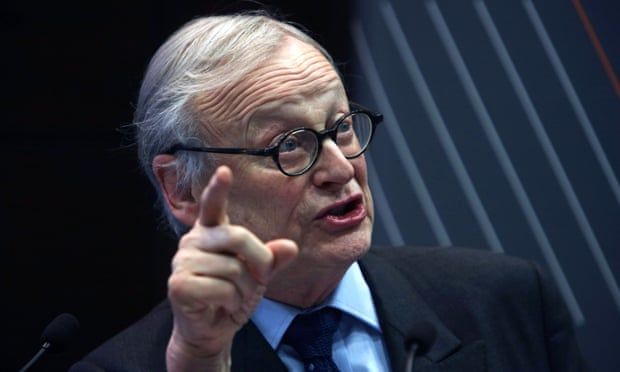 Lord Deben says he is ‘pressing very hard’ to get details of strategy published as Cop26 approaches
johnson">Boris Johnson’s delay in publishing the net zero emissions strategy has left a space for climate sceptics to “complain, attack and undermine” on cost grounds, and other countries could do with seeing more “proper leadership” from the UK before Cop26, the government’s independent climate adviser has said.

Lord Deben, the Conservative peer and chair of the climate change committee, said critics of the net zero policy had been vocal in the public debate because “it hasn’t been put into context by the government”.

Johnson has stuck to Theresa May’s policy of reaching net zero carbon emissions by 2050, but the government has not yet published a roadmap of policies, a Treasury review of costs or some of its sectoral strategies.

These are now expected in September, just two months before the UN talks in Glasgow, after rows with the Treasury about how to spread the cost of changes, ranging from green boilers to decarbonising transport.

In an interview with the Guardian, Deben said the absence of detail had “given an open opportunity for people to make all sorts of statements without any response from the government”, which was why he was “pressing very hard to get this work out”.

He said Johnson should take credit for sticking to the net zero policy, and he praised the government’s preparations for the Cop26 summit under its climate envoy, Alok Sharma.

However, he said there had been a “fundamental problem” for Sharma to persuade developing countries to sign up to steep emissions cuts when the UK had cut the foreign aid budget. “It was a very serious mistake to cut back on overseas aid,” he said, which had made it “very much more difficult” for Sharma in his negotiations.

In relation to the net zero strategy, the peer said: “Other countries would be much more willing to recognise that this is proper leadership if they see a programme in detail, but we haven’t committed ourselves to that.”

The climate change committee’s sixth carbon budget analysis found that the future cost savings from no longer having to buy oil and gas will almost offset the £50bn-a-year investment needed in low-carbon power, transport and home heating across the next three decades. It predicts that after investing in net zero policies, the UK’s GNP would be only around four months behind where it would otherwise have been.

However, the projected costs of net zero have come in for criticism in recent weeks, with the backbench Tory MP Craig Mackinlay forming a group to challenge the price tag. Steve Baker, the former Brexit minister and prominent Tory, has become a trustee of the Global Warming Policy Foundation, the climate science sceptic outfit run by the former chancellor Nigel Lawson.

Deben said it was important for the government to keep stressing that the overall cost of tackling climate change was “a relatively small amount and certainly perfectly doable”.

Asked whether the Treasury was blocking policies on cost grounds, with the Office for Budget Responsibility suggesting the overall cost could be £1.4tn over 30 years, Deben said he believed that Rishi Sunak, the chancellor, was “thinking very seriously about this” and that he had to “keep some reasonable control over public expenditure”.

He said it was right for the Treasury to be looking at how the cost is “fairly and reasonably spread across society”, highlighting the unfairness of the costs of renewables having all gone on to electricity bills in the past.

But Deben said it was an issue that the government’s overall work on net zero had not yet appeared, although he acknowledged that it was a complex thing to work out.

“The problem is that because that is very late, because it was supposed to be done very much earlier, of course it’s given every opportunity for everybody who wants to complain, to attack, to undermine what has to be done and to make a great fuss about the various costs.”

He added: “johnson">Boris Johnson has done some remarkable things in the sense that he has clearly signed up to the toughest targets of any country in the world. But the problem for this government is that having done that, we still haven’t seen the delivery programme.”

He said it was important to acknowledge that the world was “much further forward today than either you or I would have thought 10 years ago” in the effort to deal with the climate emergency, and it was important to stress that it was possible to prevent the worst scenarios.

“If we get this right then we can win the battle,” he said.
#Boris Johnson  #Johnson
Add Comment