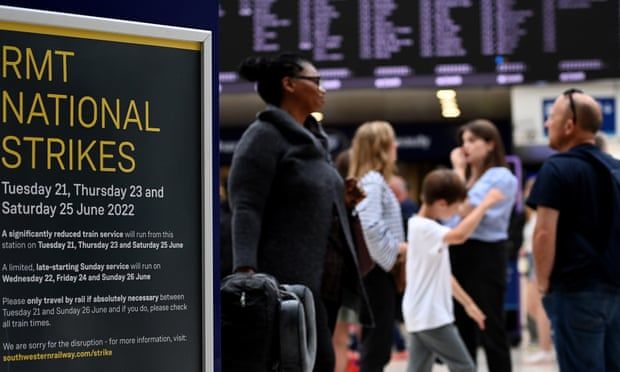 Most public sector workers should expect a real-terms pay cut this year, a minister has said ahead of the biggest rail strikes in 30 years, with Downing Street warning private employers against giving out pay rises.

With inflation feared to potentially rise above 10% by the end of the year, No 10 urged private sector firms not to hike wages as it would make the issue worse.

Simon Clarke, the chief secretary to the Treasury, said the government would “continue to support” negotiations between rail companies and unions but did not have a direct role in trying to prevent the biggest rail strikes in three decades, which were due to start on Monday night.

“I do think it’s important that we send a message this week that industrial action is likely to proceed, and therefore people make sensible preparations now, because there’s no point giving false hope, if you like, that these strikes can be avoided. At this stage it is likely that they will proceed,” he told BBC One’s Breakfast programme.

Ministers have faced calls to do more to try to prevent three planned 24-hour walkouts this week by RMT members, the first of which starts just after midnight on Tuesday morning. This will result in only one in five trains running on strike days, halting services altogether in much of northern and south-west England, Wales and Scotland.

No 10 said on Monday afternoon it “wouldn’t be helpful” for ministers to join the negotiations at this stage, and government sources have indicated they believe union leaders are just “flexing their muscles”.

Boris Johnson’s spokesperson said that given inflation was nudging double digits, “we need to, as a country, avoid doing anything that would stoke inflationary pressures further”.

They said there were “a number of factors that could stoke inflation that people need to be mindful of” and that “pay rises could be one of those areas that could be of detriment and it’s important that people understand the balance we are trying to strike”.

Johnson’s spokesperson also admitted that his pledge of a “high-wage” economy remained more of an objective given the “short- to medium-term inflationary pressures”.

They said: “The government needs to adapt to some of the global challenges we’re seeing caused by exiting a pandemic and war in Europe. But that does not change our ambition.”

Clarke, in an interview with Sky News, said: “The government doesn’t sit as part of those talks for a very good reason. We don’t intervene in the specific process between an employer and the unions representing employees, but we are there to provide the support and the enabling framework for those talks to succeed. Ultimately, we don’t control all the levers that need to be held here.”

The strike has been called over feared job losses amid restructuring, and concerns that inflation forecast to reach 11% this year would mean staff getting a real-terms pay cut. Other professions, including teachers, could take potential action over below-inflation pay rises.

Clarke said people should not have “unrealistic expectations” about pay, and that those in the public and private sectors should brace themselves for real-terms pay cuts this year.

“In the current situation with inflation, which is a real issue, we do have to be very, very sensitive,” he told Sky.

“If we start having pay awards that take us close to double digits, then we are going to see this problem prolong. That is just the economic reality of where we find ourselves at the moment.”

John Leach, the assistant general secretary of the RMT union, said members would seek “justice for themselves”.

“They kept this country moving through the pandemic, they keep the railways moving every single day and it’s that kind of grit and determination that’s going to mean that they will stick with this negotiation and justice for themselves in that regard, right through to the end,” he told BBC Radio 4’s Today programme.