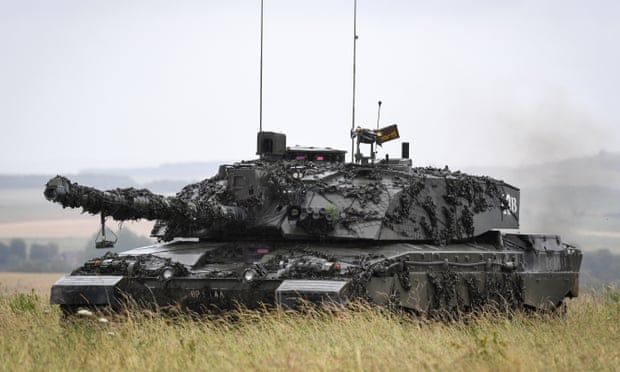 In a statement to MPs, Ben Wallace said gifts of weapons by Britain could eventually total £500m, and he said 15,000 Russian soldiers had died since the invasion began on 24 February.

“We have gifted in aid £200m which we propose will grow to £500m to Ukraine,” Wallace told the House of Commons. Replacement equipment would be paid for by the Treasury on an “old for new” basis, the minister said.

The objective of British military support should be to help ensure Ukraine “gets to chose where it wishes to settle for peace”, Wallace said, but he added that in his view Russia should be forced out of the entire country, back to its pre-2014 border.

“I want Putin not only beyond the pre-February boundaries. He invaded Crimea illegally, he invaded Donetsk illegally and he should comply with international law and in the long run leave Ukraine,” Wallace said.

On Monday night it was also announced that the UK would send 22 new ambulances to Ukraine and had already sent more than 40 fire engines.

Britain is also one of the largest suppliers in Europe of arms to Ukraine, running down its stocks of weapons to keep Kyiv’s forces supplied. But its supplies are dwarfed by those of the US, which has provided $3.7bn of military aid since Russia invaded.

On the tanks, Wallace’s language suggested a firming up of plans first floated by Boris Johnson on Friday when he said the UK was “looking at” sending British Challenger 2s to Poland so that Warsaw could in turn send Ukraine more T-72 tanks, the Russian design used by its armed forces.

Wallace told MPs: “We’re also offering a deployment of British Challenger tanks to Poland to bridge the gap between Poland donating tanks to Ukraine and their replacement arriving from a third country.”

Poland expects to receive the first of 250 US-made Abrams tanks later this year but is willing to send more of its arsenal of T-72s to Ukraine if the UK and other western nations come forward and provide reinforcements now.

Earlier this month it was suggested that Poland could donate 100 T-72s to its neighbour, and there have been some reports suggesting some of the Soviet-designed vehicles have already secretly been sent.

Wallace indicated that the UK was looking at supplying Brimstone ground-based missiles that could be used to defend Odesa against any seaborne invasion, but he ruled out giving Kyiv the UK’s dated AS90 artillery.

Since the beginning of the year the UK has supplied 5,361 NLAW anti-tank bazookas, more than 200 US-made Javelin missiles and 104 Starstreak high-velocity and other low-velocity anti-tank weapons, Wallace said.
#Boris Johnson  #Johnson
Add Comment