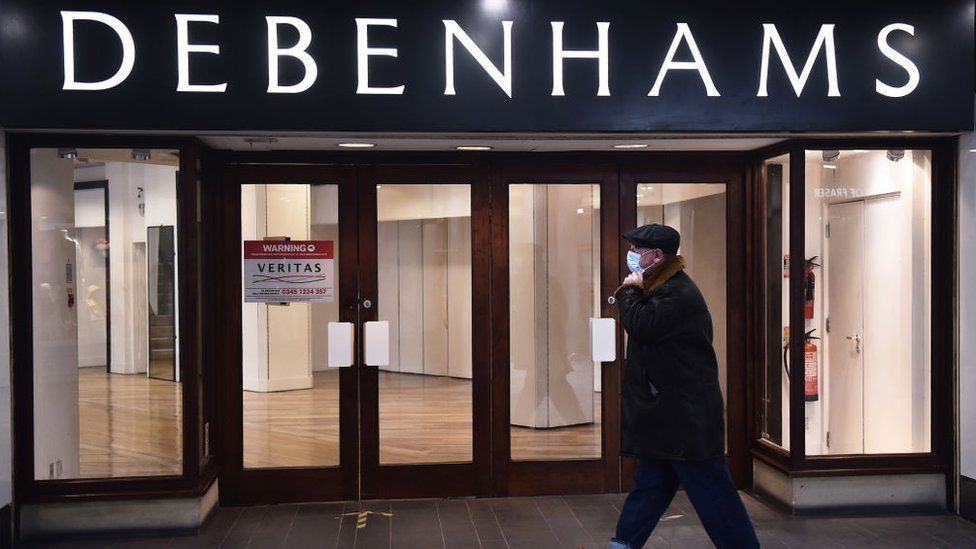 The UK has lost 83% of its main department stores in the five years since the collapse of the BHS chain.

The figure highlights the extent of the upheaval in the High Street as the Covid pandemic sped up changes in shopping habits.

Some 237 big stores have yet to be taken over by a new business.

"The data undoubtedly highlights the acceleration of change in the retail sector in recent years, which the pandemic has only exacerbated," said CoStar Group's head of analytics, Mark Stansfield.

CoStar tracked the UK's largest chains, from BHS and Beales to Debenhams and House of Fraser, from 2016 to the present day.

Five years ago, they had 467 stores between them. Now, however, only 79 are left. 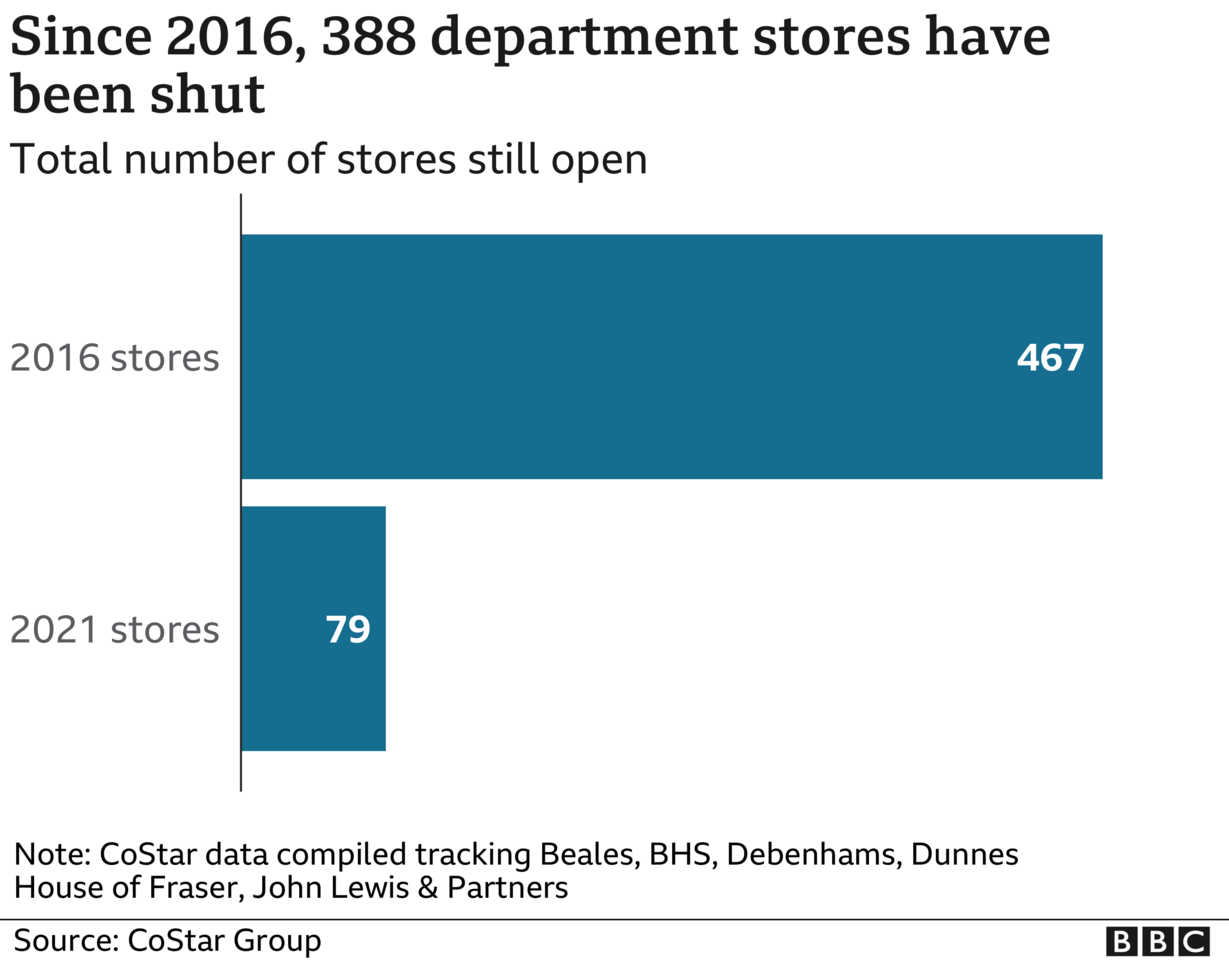 CoStar Group also examined what had happened to the 388 that had closed.

Although 237 are currently sitting empty, 52 already have either firm plans in place or early planning approval for a change of use or repurposing. The research was done in July. 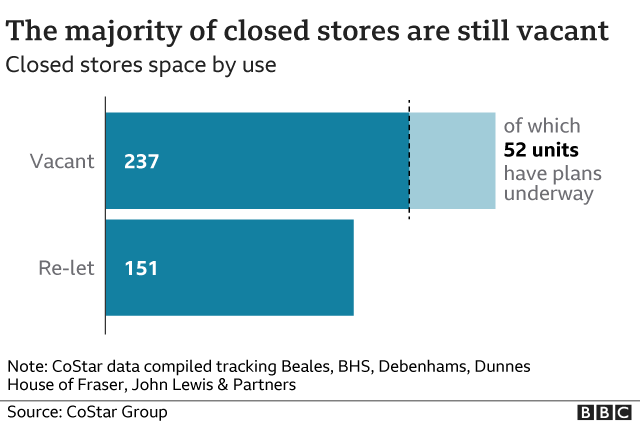 Mr Stansfield told the BBC he believed the pace of change would soon step up.

"We are increasingly seeing forward-thinking real estate owners getting ahead of the problem and reshaping what are key assets in our town centres to provide a focal point for regeneration," he said.

"I think we'll see many more plans come to light in the coming months. With these store closures come new opportunities."

Department stores have long been the cornerstone of UK shopping areas. Many are in purpose-built shopping centres, while some occupy historic buildings.

Figuring out what to do with all this redundant space is one of the biggest challenges for landlords, as well as for the town centres that host those properties.

BHS is a good illustration of why there is no quick fix for the problem. Five years after the retailer ceased trading, a quarter of its former outlets have still failed to attract new tenants.

In 2016, the BBC visited the old BHS store on Edinburgh's Princes Street, one of the biggest in the chain. The owners already had new ideas for the site - and crucially, they decided to turn it into a building with a mix of different uses.

Its six floors, once riddled with asbestos, have slowly been transformed. The old staff locker rooms and half of the building have been turned into hotel bedrooms by Premier Inn. 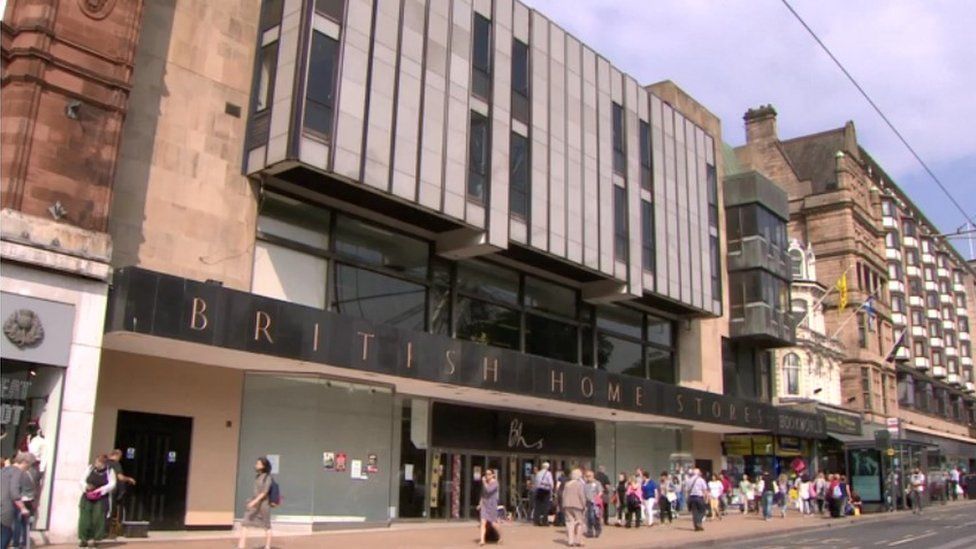 They're also putting the finishing touches to a state-of the art office right at the top, while the basement will hopefully become a bowling alley. There will also eventually be retail, just a lot less than before.

"It costs a lot of money and takes a lot of time to turn these large format spaces into new uses," says the architect behind the project, Frank Hinds of CDA.

"In development terms, we did this in a relatively short space of time."

When it comes to repurposing, says Mr Hinds, the stumbling blocks are often financial. Investors have to be able to make a return to justify the huge investment. Luckily for this BHS, it's on a world-class street.

"The viability comes from the location and the desire that people have to be in that location," he adds.

For Premier Inn, the hotelier involved, it was an opportunity too good to miss. "Buildings like this don't come along very often with beautiful views across to the castle," says Valerie Graham, regional operations director. 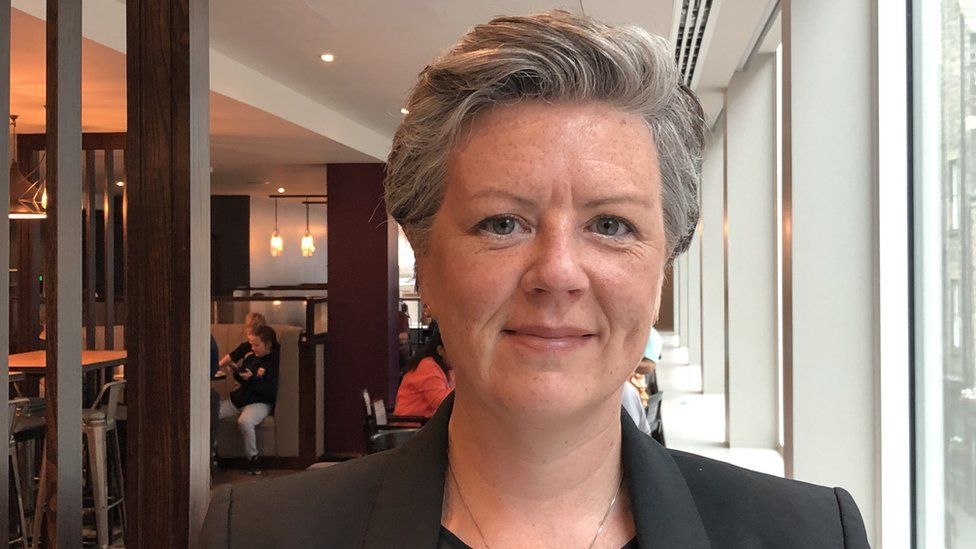 "Seeing so many people get use of the space is just fantastic. And the demand is there. We're creating jobs too."

Edinburgh has lost four of its main department stores in the past few years, but, fortunately, there are solutions under way for all of them.

For instance, the former House of Fraser store at the other end of Princes Street is about to open its doors as the Johnnie Walker Whisky Experience.

Filling the gaps in smaller towns is a much greater challenge. In Dumfries, the old Debenhams store is still vacant.

It's the biggest retail unit in the town, with no takers so far for the space.

"It comes down to money," says Scott Mackay, who runs the Midsteeple Quarter, a local company founded to benefit the community.

Through crowdfunding, donations and public money, it's buying old, empty, shops and bringing them back to life with new tenants. 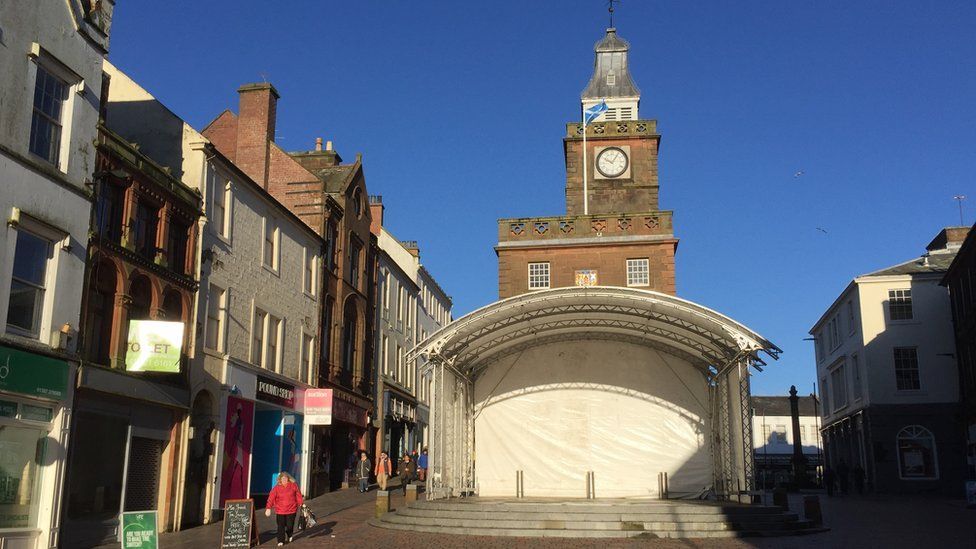 "This is a small rural town historically and there isn't the amount of money to be invested in Dumfries compared with our bigger cities. We stand or fall on our own two feet," he says.

Would he like to take on the former Debenhams site as well? "If we had the funding, absolutely we would take on a building like this," he says.

"I think it would make a great small boutique cinema or food court on the ground floor, with potentially residential on the upper floors."

Some of form of intervention is needed, he believes, to avoid the store sitting empty for years.

Debenhams is a more recent casualty of the changing High Street environment than BHS, having shut its last stores in May this year.

In all, 149 former Debenhams stores are currently vacant, as the data from CoStar Group shows.

CoStar Group's team has been scouring planning applications and talking to property agents on the ground as well as big landlords for this research, which is the most comprehensive picture to date on the huge structural changes to have hit this part of British retail.

The appetite for quality shop space hasn't completely diminished. For instance, Next has already taken space in Debenhams stores for its new beauty concept, while Mike Ashley is redeveloping or re-letting space for his Flannels brand.

But if BHS is anything to go by, reviving many of these these vast sites will take time, as well as some radical thinking.