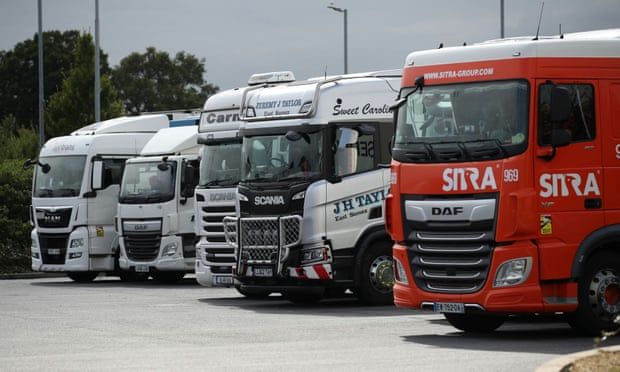 Amid the most severe labour crunch since the 1970s, the Confederation of British Industry (CBI) launched a broadside against the government, saying the UK’s economic recovery from the winter lockdown was being undermined by a lack of skills in key positions, with mounting risks that the problem would continue for some time.

“Standing firm and waiting for shortages to solve themselves is not the way to run an economy,” said the CBI director general, Tony Danker, whose group represents 190,000 businesses with more than 7 million employees. “We need to simultaneously address short-term economic needs and long-term economic reform.”

He said the government’s ambition to make the British labour force more highly skilled and productive was right, and that businesses would train and hire more homegrown workers in time, but added that this could not be achieved overnight.

“A refusal to deploy temporary and targeted interventions to enable economic recovery is self-defeating,” said Danker.

The CBI is calling for the government’s shortage occupation list, which helps recruit workers from abroad to fill particular skills gaps, to be updated to include lorry drivers, welders, butchers and bricklayers.

A lack of butchers in slaughterhouses has caused a crisis on pig farms, with the National Pig Association warning that farmers may have to kill and burn nearly 100,000 animals unless ministers agree to a temporary relaxation of visa rules so that additional workers can be recruited to process the meat.

Britain needs about 100,000 more lorry drivers, according to the Road Haulage Association, which estimates it will take at least 18 months to train enough people to fill the gaps.

Danker said: “Businesses are already spending significant amounts on training, but that takes time to yield results, and some members suggest it could take two years rather than a couple of months for labour shortages to be fully eliminated.”

Kwasi Kwarteng, the business secretary, wrote to business leaders last month calling for firms to hire British workers to deal with labour shortages rather than relying on immigration.

With the furlough scheme due to be removed at the end of this month, he suggested domestic workers should be a priority, telling bosses: “Many UK-based workers now face an uncertain future and need to find new employment opportunities.”

However, the Resolution Foundation said on Sunday that staff shortages were unlikely to be solved by the end of furlough, and warned mismatches between the types of jobs that may no longer be needed and vacancies elsewhere in the economy would persist into next year without government action.

The number of people on furlough fell to 1.7 million in August, and the thinktank said as many as 900,000 workers could still be reliant on the wage support scheme when it ends on 30 September, most of them older workers or those under the age of 25. However, the majority are likely to return to their previous jobs. And despite firms reporting hiring bottlenecks, even a fresh surge in job starts is unlikely to prevent unemployment rising this autumn.

“Furlough ending is not the panacea some people think will magically fill labour supply gaps,” said Danker. “These shortages are already affecting business operations and will have a negative impact on the UK’s economic recovery.”

In a report published on Monday, the CBI said firms with furloughed workers would probably bring them back, which would not help companies struggling with labour shortages. It said people facing redundancy would probably prefer to get back into their old occupation with other firms, or would need time to retrain into other sectors, meaning there would be little immediate benefit.

The CBI said a third of the companies responding to its July manufacturing survey were worried that a lack of workers would limit economic growth this autumn, the highest share since the mid-1970s.