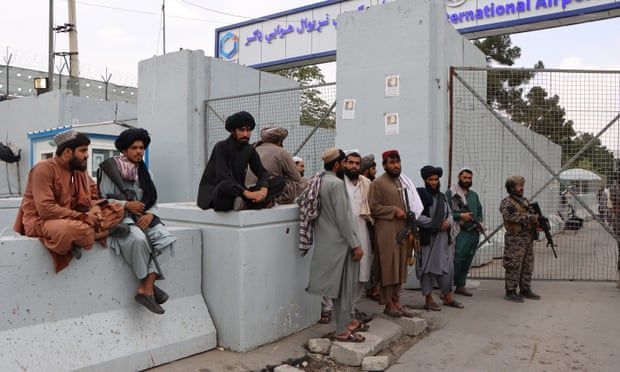 UK has little option but to talk with the Taliban

Analysis: Insurgents’ cooperation is needed for evacuations, but PM could face criticism for engaging with them
Boris Johnson’s decision to dispatch a senior spy chief to talk directly to the Taliban in Qatar reflects an uncomfortable but necessary reality: the UK has little option but to engage with the insurgent group now in control of Afghanistan.

Thousands of Afghans eligible for resettlement in the UK are believed to remain trapped in the country – UK ministers refuse to say how many – and hundreds of British nationals. With western troops withdrawn, it is only with Taliban cooperation that people will be able to leave safely and smoothly.

Nor is it clear how best to do it. The defence secretary, Ben Wallace, on Tuesday night told MPs that Afghans who thought they had a chance of coming to the UK needed to “use their own judgment” as to whether they should head for the border.

Tobias Borck, a Middle East research fellow at the Royal United Services Institute thinktank, said talking to the Taliban was a pragmatic necessity. “This is not a form of diplomatic recognition – it is the realistic way to get the remaining people out of the country.”

Conservative MPs emphasise that negotiating with the Taliban must come with conditions. Andrew Mitchell, a former international development secretary, said: “The government is absolutely right to talk to the Taliban.”

But he added: “Afghanistan today is very different from the Afghanistan of 20 years ago. There have been real gains in human rights, particularly for women, and we must do everything we can to consolidate and bolster those.”

As recently as a fortnight ago, British officials were privately admitting that the UK had no direct high-level contact with the Taliban, an uncomfortable position given how much was at stake.

Instead, during the emergency evacuation from Kabul in the second half of August, the UK was having to rely on understandings reached in talks between the US and the Taliban, including a face-to-face dialogue between the CIA director, William Burns, and the insurgents’ de facto leader, Abdul Ghani Baradar.

But a few days ago, Sir Simon Gass, the chair of the UK’s joint intelligence committee and the prime minister’s envoy for Afghan transition, was sent to the Qatar capital, Doha, where Baradar was based until recently and where the Taliban’s political office remains.

The office itself is a nondescript building, set up a decade ago with the blessing of the US. But the Taliban leadership in exile is well used to discussions with the US and other diplomats in one of Doha’s many luxury hotels. It is not clear where Gass’s meetings have taken place.

Gass is a veteran Middle East negotiator, used to sensitive tasks. He led the UK’s day-to-day team that helped stitch together the original Iran nuclear deal – and was sent by David Cameron in 2014 to visit Iran, the first British senior official in the country after the embassy was closed three years earlier.

The UK is not alone in taking the step of opening dialogue with a group long considered an enemy during 13 years of war between 2001 and 2014 – which claimed more than 450 British lives – and seven more years of occupation.

Earlier this week, India acknowledged its ambassador in Qatar had met Taliban representatives, discussing “safety, security and early return of Indian nationals” and demanding that Afghanistan should not be used for “terrorism in any manner”.

Such discussions could be the start of a pathway for diplomatic recognition of a Taliban-led government in Kabul. But that path – or even a path to greater cooperation – remains far from smooth, with the United Nations warning repeatedly about Taliban reprisals directed at former Afghan army soldiers and those who worked with the west.

On Wednesday, the deputy head of the Taliban political office in Qatar said women would not be allowed to take cabinet posts or other top political roles in a future government. Such statements are likely to fuel further criticism of Johnson’s decision to engage with the group.

Nusrat Ghani, another Tory MP, said she was sceptical about the Taliban’s long-term intentions. “I’m trying to say this without swearing, but we’re exhausted by this commentary by the Taliban PR machine,” she said in a Times Radio interview. “They want to establish a caliphate that has no room for women and girls to be outside their home.”
#Boris Johnson  #Afghanistan  #Johnson
Add Comment