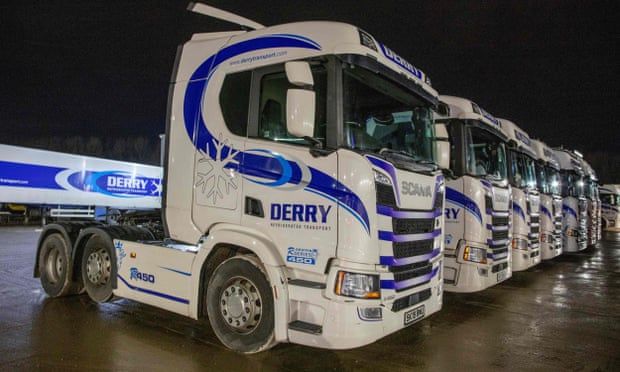 Rules due to come into force on 1 January postponed as act of ‘good faith’, says Brexit minister
The UK has delayed the introduction of imminent trade checks on goods moving from the island of Ireland to Britain, as both sides sought to take the sting out of the rancorous talks over post-Brexit arrangements for Northern Ireland.

The Brexit minister, David Frost, signalled his acceptance that the negotiations with the EU would continue into the new year, issuing a statement saying the checks due to come into force on 1 January would be postponed as an act of “good faith”.

“The government believes that this pragmatic act of goodwill can help to maintain space for continued negotiations on the protocol,” Lord Frost said. “It also ensures that traders in both Ireland and Northern Ireland are not faced with further uncertainty while the protocol arrangements themselves are still under discussion.”

Frost spoke to his European commissioner counterpart, Maroš Šefčovič, on Wednesday and will speak again on Friday, with high expectation that the talks will be put on ice over the Christmas break.

Earlier this year, it had appeared that Downing Street was willing to blow up the negotiations by unilaterally suspending the arrangements on Northern Ireland by triggering article 16 of the deal.

But there has been a softening of approach in recent weeks, raising hopes of a settlement on what has been the thorniest Brexit issue for the past five years.

Under the tortuously negotiated protocol in the withdrawal agreement, Northern Ireland in effect stays in the EU’s single market and a customs border is drawn down the Irish Sea. But both sides have agreed that consequences on trade between Britain and Northern Ireland have been heavy.

This consensus had appeared to be in danger of imploding, however, after Frost responded to a new EU plan for the border that would cut the number of checks on goods by more than 50% by insisting that he needed a more thorough rewrite of the deal.

In recent weeks, however, Frost’s most contentious demand, that the European court of justice (ECJ) lose its role as arbiter of EU law in Northern Ireland, has been put on the backburner, sources said.

One senior UK official told journalists for European publications last week that the demand over the ECJ had been dropped, although the government later sought to distance itself from the briefing.

“If the negotiations fail it won’t be because the UK is insisting on taking the ECJ out of the protocol,” the official was reported as saying.

Despite the frantic denials of a U-turn, it is understood that the discussions between Frost and Šefčovič have indeed been more productive in recent weeks, with sources on both sides saying that a deal in the new year was looking more likely than not.

A deal on ensuring that medicines approved in the UK can continue to be used in Northern Ireland is particularly close, although the EU may still act unilaterally before the new year to deal with the issue if final agreement is not reached this week.

As it stands, most medicines entering from Great Britain would have to undergo batch testing at laboratories in Northern Ireland, a significant expense that would reduce supply. This problem also affects EU member states such as Malta, which sources many of its medicines from the UK.
Add Comment