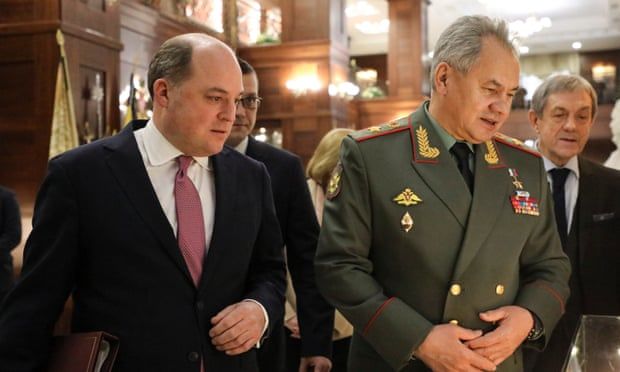 Wallace had been in continental Europe with his wife and children after talks in Moscow on Friday, but will return, he announced in a tweet.

“Having returned from Moscow early on Saturday morning and because we are concerned about the worsening situation in Ukraine I have cancelled a planned long weekend abroad with my family and will be returning,” he said.

A senior defence source said Wallace had been on the trip, at an undisclosed location, but was heading back to the UK. They said: “As events worsen the secretary of state has cut short a planned long weekend with his children for half-term.”

Wallace’s discussions last week with his Russian counterpart, Sergei Shoigu, appeared to deliver little, with Shoigu describing levels of cooperation with Britain as “close to zero” and criticising the UK’s supply of arms to Ukraine.

Their talks came a day after a similarly frosty encounter in Moscow between Liz Truss, the UK foreign secretary, and Russia’s foreign minister, Sergei Lavrov, who characterised the pair’s talks as a discussion of the “mute with the deaf”.

The idea of ministerial holidays amid international crises is a particularly sensitive one in Boris Johnson’s government after intense criticism of the then foreign secretary, Dominic Raab, for remaining on a family holiday in Crete in August while the Afghan government collapsed.

Raab declined to be contacted about some government business while on holiday, sources said, and handed over decisions to a junior minister in the days leading up to the Taliban’s takeover.

Raab said he had stayed in touch with decisions at all times, but did accept he told another minister to make a call to assist in the evacuation of former British military translators. He resisted calls to quit, but was demoted to justice secretary in a reshuffle the next month, while keeping his largely courtesy title of deputy prime minister.

In December, a Foreign Office whistleblower provided a statement to MPs describing what he said were chaotic scenes in London even after Raab returned, saying he took “hours to engage” with critical evacuation cases, before requesting the files be submitted in a different spreadsheet format.

Allies of Wallace also sought to clarify his controversial comments on Sunday afternoon, in which he compared the west’s talks with Russia to the Munich agreement, the attempts at diplomacy that failed to stymie the second world war.

In an interview with the Sunday Times, Wallace said: “It may be that he [Putin] just switches off his tanks and we all go home but there is a whiff of Munich in the air from some in the west.”

The Wallace allies emphasised that the significant word in his remarks was the initial “if” – meaning that the comparison to the failed appeasement of 1938 applied only if Vladimir Putin was negotiating in bad faith and always intended to invade Ukraine.

Vadym Prystaiko, Ukraine’s ambassador to the UK, had earlier complained that the alarms being sounded by the west risked playing into Putin’s hands. “It’s not the best time for us to offend our partners in the world, reminding them of this act which actually not bought peace but the opposite, it bought war,” the diplomat told the BBC.
#Boris Johnson  #Dominic Raab  #Johnson  #Raab
Add Comment