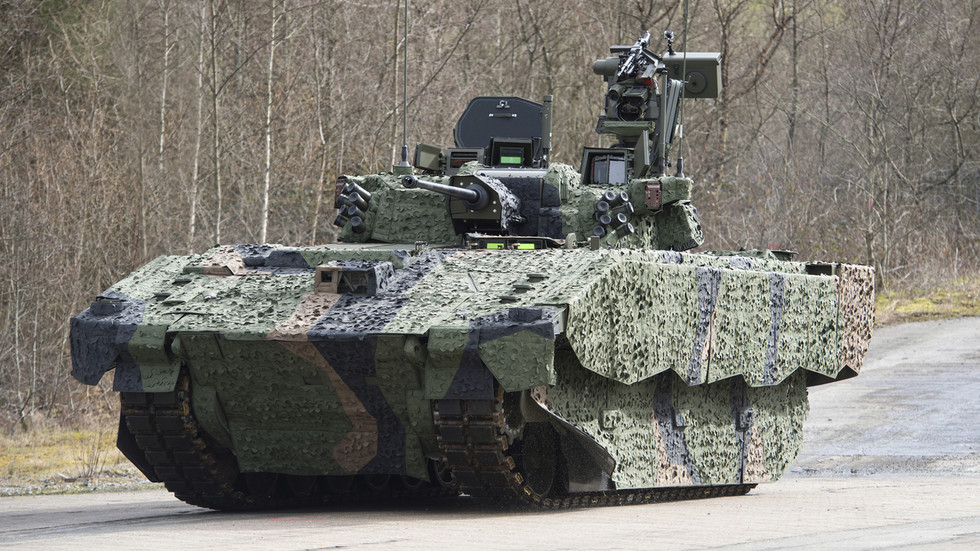 UK Defence Ministry spent £3.2 billion on tanks that can’t shoot on the move

The UK has spent a whopping £3.2 billion ($4.5 billion) on noisy tanks that can’t shoot while moving, according to a Times report. The news comes after critics called on the government to upgrade its “deplorable” armoured fleet.
Developed by General Dynamics, the Ajax armoured fighting vehicle impressed then-Prime Minister David Cameron so much that he ordered 589 of them in 2014, after receiving the Army’s go-ahead four years earlier. Delivery dates have since been missed, and the Army is still waiting to roll out the vehicles, but a Times report on Sunday revealed that technical experts have encountered numerous “safety issues,” including excessive noise inside the vehicles, and cannons that can’t fire while on the move due to vibration.

Armed with 40mm cannons and light machine guns, the Ajax vehicles are lighter and more maneuverable than Britain’s aging main battle tank, the Challenger 2. As such, an inability to fire while moving renders the vehicles useless to the reconnaissance units that would eventually use them in the field.

Nevertheless, the British government has handed over more than £3.2 billion for the vehicles, out of a total programme cost of £5.5 billion, according to Ministry of Defence documents seen by the Times. The most recent round of payments, adding up to nearly £600 million, were made this year.

Government spending watchdogs are apparently unhappy, and one of the Times’ sources suggested that payments are not linked to the delivery of working vehicles. If so, General Dynamics has thus far earned a sizeable chunk of change from the UK's defence coffers without delivering a working product.

The Ajax was conceived to replace the obsolete 1970s-era Scimitar light tanks currently used by armoured reconnaissance units, yet the future of such vehicles was uncertain even before the latest issues with the Ajax emerged. When Prime Minister Boris Johnson unveiled a massive hike in defence expenditure last year, he said that the government’s spending would “be focused on the technologies that will revolutionize warfare,” including a heavy investment in artificial intelligence and the creation of an RAF Space Command, capable of launching a rocket from Scotland in 2022.

However, a parliamentary committee in March excoriated the government for neglecting Britain’s conventional forces, drawing attention to the “deplorable” state of Her Majesty’s armored vehicle capability. Their report heavily criticized the cost and delays involved with the Ajax program, including the vibration issue that Defence Secretary Ben Wallace referred to late last year as “a slight pause in the area around the turret.”

“Of the vehicles we do still have, some date back to the early 1960s, when the Morris 1100 was the most popular car and Elvis was the Christmas number one,” committee chairman Tobias Ellwood said at the time. “A mixture of bureaucratic procrastination, military indecision, financial mismanagement and general ineptitude has led to a severe and sustained erosion of our military capabilities.”

Yet the Ajax boondoggle is not the first incidence of mismanagement at the MoD.

When the Ministry of Defence replaced the FN FAL with the Enfield SA80 as its service rifle in the late 1980s, problems soon emerged. The weapon would jam, its metal components would rust and deform, and it proved wholly unusable in desert environments – which became apparent when British soldiers took part in the Gulf War. After a post-war report identifying these faults leaked to the press, the ministry first pretended the report was fake, before embarking on a costly upgrade programme.

More recently, the ministry has been slammed for spending so much money on its two new ‘Queen Elizabeth’ class aircraft carriers that it couldn’t afford the planes and support vessels needed to deploy them for a year, and couldn’t modify the ships to perform amphibious landings – one of their selling points.

Furthermore, the American F-35 fighter jets that these carriers would launch have been plagued by delays, design flaws and cost overruns, to the point where the ministry has refused to say whether it will buy its original order of 138 F-35s, and declined to offer a cost estimate for the programme as a whole. The 48 jets already ordered are estimated to run up a bill of £9.1 billion by 2025, and the government has not commented on whether upgrade costs will drive that figure up further.
#Boris Johnson
Add Comment