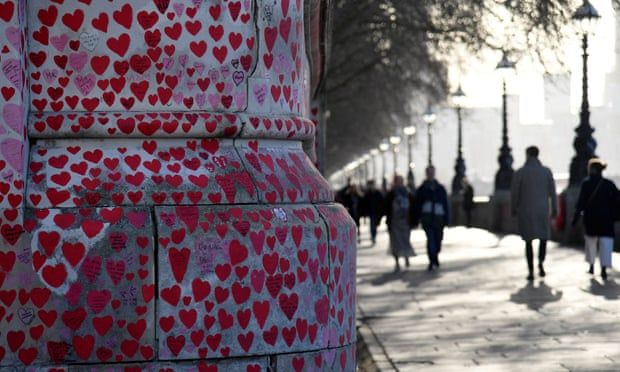 Figure of 176,035 differs significantly from government’s official count – which exceeded 150,000 at weekend

The UK’s main statistical body has reported more than 175,000 deaths involving Covid since the start of the pandemic.

The ONS has reported 176,035 deaths where Covid was mentioned on the death certificate since March 2020. The figure differs significantly from the government’s official count – which exceeded 150,000 deaths over the weekend – which requires patients to have had a positive test within 28 days before their death.

The ONS figures are considered to be more accurate but because of delays in death registration they are not as up-to-date as the government figures. The 175,000 total was passed on 20 December 2021, but owing to these time lags, the ONS figures have only now been confirmed.

This latest release takes the 2021 death toll to 81,037, down from 94,998 in 2020. However, the figures for more recent dates may still be revised upwards, especially because the number of deaths registered in the last week of the year will have been affected by the Christmas and Boxing Day bank holidays, which means they will not yet have been recorded. 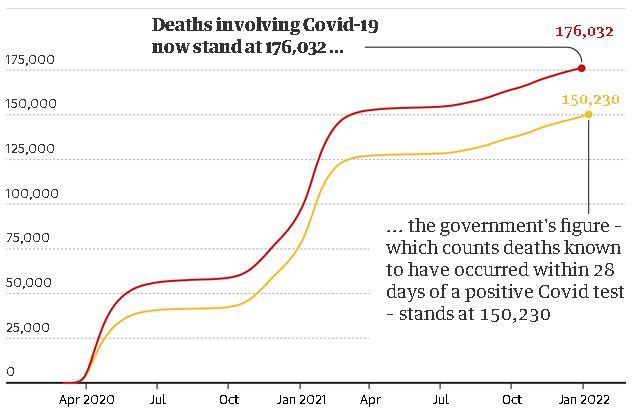 A total of 3,891 people have died of Covid since the first case of the Omicron variant was discovered in the UK on 27 November. The average lag between infection and death is 16-18 days and can be up to eight weeks, according to the ONS, so the Omicron death toll may increase further in coming weeks.

The number of deaths this winter has not yet come near the peak of previous waves despite a huge surge in Omicron cases. On 29 December, 246,000 new cases were confirmed, smashing previous records and taking the seven-day average figure to 192,000.

Kit Yates, co-director of the Centre for Mathematical Biology at the University of Bath, said: “We can expect both of these [death] figures [from the ONS and the government’s official count] to continue to rise for some time, reflecting the huge rises in infections that we’ve seen and the fact that cases have moved up the age ranges impacting more vulnerable older people. 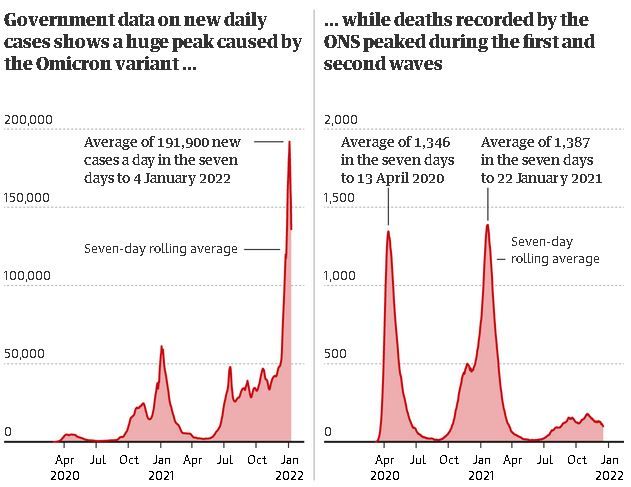 “Even so, we wouldn’t expect to see deaths get close to the disastrous figures we saw at this time last year and during the first wave, when we saw over 9,000 deaths a week. In large part this is due to the vaccination/booster programme, which has delivered good protection against severe disease and death.

Of the deaths registered in the last week of December in England and Wales, 582 mentioned Covid, or 6.9% of all deaths, a decrease on the previous week when there were 852 deaths, or 6.5% of deaths in the week to Christmas Eve.

Between the beginning of the pandemic and the end of 2021 there has been a crude Covid death rate of 262 deaths per 100,000 people in the UK, rising to 291 per 100,000 population in Wales, home to the highest proportion of people aged 65-plus of the UK’s constituency countries.

The figures come as the government is considering cutting the mandatory isolation period for people infected with Covid-19 from seven to five days after a number of sectors have been affected by staff shortages.

Boris Johnson said: “The thing to do is to look at the science. We are looking at that and we will act according to the science.”