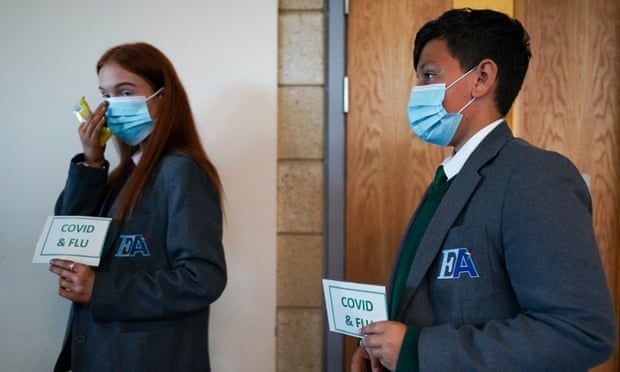 What has been announced?

Until now, Covid booster jabs were only being offered to adults aged 50 and older, and those in at-risk groups. This is now being extended to include all adults aged 40 to 49, and Boris Johnson has said the concept of what constitutes “full vaccination” will need to be adjusted. This third jab will be given six months or more after the second dose.

The Scottish government said 40- to 49-year-olds would be invited to receive a booster once everyone in the earlier priority groups had been offered one, but that they would be able to book an appointment through the NHS portal “shortly”. They were also considering how best to implement the advice for 16- to 17-year-olds. The Welsh government also said it would provide information shortly on how they planned to roll vaccines out to these groups and Northern Ireland is expected to follow suit.The Joint Committee on Vaccination and Immunisation (JCVI) is also advising that a second dose of Covid-19 vaccine should be offered to all 16- and 17-year-olds, 12 weeks or more after receiving their first vaccine dose. Previously, only those in at risk groups were eligible for a second dose; other teenagers had to wait until they turned 18.

For 16- to-17-year-olds, the decision to advise on a second dose was based on a review of the latest evidence of the benefits of the vaccine programme, compared with the risks of any side-effects, the JCVI said. Not only does a second dose increase the level of protection and extend the duration of that protection, it may also reduce the risk of onward transmission to vulnerable close contacts, such as grandparents.

How much additional protection will a booster provide?

Newly published data from the UK Health Security Agency (UKHSA) suggested that Britons aged 50 years and older who received a third booster dose of either the Pfizer or Moderna vaccine increased their level of protection against symptomatic Covid-19 infection to 93.1% for those who had previously received two doses of the AstraZeneca vaccine and to 94.0% for those who previously had the Pfizer jab.

Twenty weeks or more after receiving their first two doses, the level of protection among those who did not get a booster was 87.4% for those who had had the AstraZeneca vaccine, and 84.4% for those received the Pfizer jab.

“This is the first real evidence of the effectiveness of the booster in the UK setting,” said Paul Hunter, a professor in medicine at the University of East Anglia. “This is perhaps even more impressive when considering that a significant proportion of people who have not yet had their booster will have had an infection and so had some additional protection now. This report also gives reassurance that whether someone had AstraZeneca or Pfizer as their first course, the booster provides similar excellent protection.”

Because of the natural lag between acquiring infection and experiencing complications, it is too early to say what the impact of boosters on hospitalisations will be.

When will I be able to book an appointment?

According to NHS England, the National Booking System will open for those aged 40-49 from 22 November, allowing those who had their second dose at least 152 days (five months) earlier to book a third jab – although the appointment itself won’t take place until at least 182 days (six months) after their second dose.

For those aged 16-17, the booking service for second jabs will be available from 22 November, with appointments available no earlier than the recommended 12 weeks after their first.

Will it be the same vaccine as I received the first time around?

Not necessarily. The JCVI is advising that booster jabs for adults aged 40 years and over should be either Pfizer or Moderna – irrespective of the vaccines given for the first and second doses.

For 16- and 17-year-olds, the second dose will be the Pfizer vaccine – the only vaccine currently licensed for this age group in the UK.

How long will it take for the additional protection to kick in?

In the UKHSA study, the level of protection five to six days after the booster dose was similar to that seen in individuals who had received two initial doses but no booster. It is unclear precisely when the additional protection from the third jab would kick in, but the higher levels of protection observed in this study were recorded 14 days post-jab. It’s possible that protection will be higher still as time progresses, although how long this additional protection will last is unknown. It is also unclear whether further booster doses will be required in the future, and if so, when.

Will younger teenagers and adults be offered second jabs or boosters as well?

According to the JCVI, there is currently no robust evidence of a decline in protection against hospitalisation and deaths among under-40s who have received both vaccine doses. However, since these individuals are at lower risk of severe disease and received their first two doses later than older adults, it may simply take longer for any decline in protection to be detected.

Vaccination of 12- to-15-year-olds is ongoing, with some yet to receive a first dose. However, many scientists believe they should be offered a second vaccine dose in due course. The JCVI said it would continue to closely review all available data to develop further advice.

What if I’ve recently been infected with Covid-19?

The NHS advises adults to wait four weeks after having a positive Covid-19 test before booking a booster.

For 16- and 17-year-olds, the second vaccine dose should be given 12 weeks or more after the first dose, or 12 weeks after a positive Covid-19 test result, whichever is later.