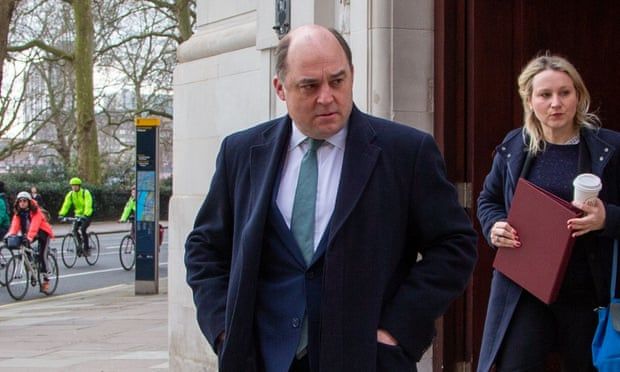 UK could expand revised visa rules for Ukrainians after criticism

“We need to reflect on what Europe announced with the refugee crisis yesterday,” Ben Wallace told BBC One’s Breakfast programme. “We will keep all the measures under review.”

Under plans set out on Sunday evening and due to be announced to parliament later, Ukrainian nationals settled in the UK will be able to bring their “immediate family members” to join them.

Subsequent Home Office guidance said the visas were available only to spouses, unmarried partners of at least two years, parents or their children if one is under 18, or adult relatives who are also carers.

The shadow home secretary, Yvette Cooper, called the offer “shameful”, arguing that in practice brothers or sisters of Ukrainians settled in the UK might not be eligible.

While saying he could not definitively say more would be done, Wallace argued the UK had been generous to Hong Kong and Afghan nationals and would look at its policy in the light of the EU’s decision to consider accepting all Ukrainian nationals for up to three years.

“Obviously we will reflect on what the EU has announced, and look at how we can help Ukraine more,” Wallace said. “What is going to be announced today is the start of that process.

“It was only announced yesterday. I think good policy is made in analysis and studying of what that means. We are open to all sorts of suggestions about how we can help people from Ukraine. We’ll reflect on that, we’ll look at the announcement this afternoon, and I know [home secretary] Priti Patel and the prime minister are absolutely certain that we have to lean in and support Ukrainians, whatever that means.

“Let’s look at those details from Europe and then we will be able to discuss what comes next in our policy.”

Wallace warned the fighting in Ukraine could become notably more brutal, with Russian forces suffering reverses. “This is the overwhelming scale of the Russian Federation army up against Ukraine,” he said. “They are behind schedule, they are taking significant casualties, and they are feeling public rejection in parts of the Russian system itself – we’ve seen many protests.

“But the Russian handbook is to then get more violent and commit more forces. Because fundamentally, in the Russia doctrine, the lives of their own soldiers matter much less than in other armed forces.

“We have to brace ourselves for what may come next, which could be ruthless, indiscriminate bombing of cities, and the propelling forward of soldiers and high casualty levels. And that’s going to be horrific.”

Wallace warned against panic after Vladimir Putin on Sunday ordered his military to put Russia’s nuclear deterrence forces on high alert – while saying his own 12-year-old son had phoned him, worried, to ask about this.

“We don’t see or recognise in the phrase or the status he described anything that is a change to what they have currently as their nuclear posture,” Wallace said. “This is predominantly about Putin putting it on the table, just to remind the world that he has a deterrent.

“By entering this into the conversation yesterday he did two things. He reminded people he’s got nuclear weapons, which starts to set off people being worried. But secondly he distracted from what’s going wrong in Ukraine.”

The government would “take all necessary steps to bring into effect restrictions to prohibit any UK natural or legal persons from undertaking financial transactions involving the [Russian central bank], the Russian national wealth fund, and the ministry of finance of the Russian Federation”, the Treasury said.
#Priti Patel
Add Comment