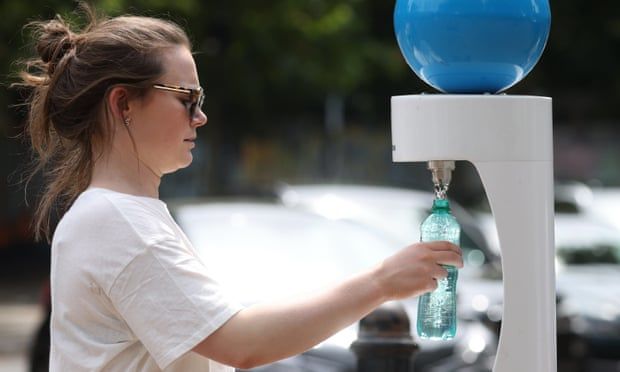 Network Rail says to avoid trains unless absolutely necessary, with much of country covered by extreme heat alert
The UK’s first ever red warning for exceptional heat came into force at midnight, with temperatures expected to climb up to 41C (105.8F) over the next two days, breaking the country’s heat records.

Passengers have been urged not to travel by train from Monday as a record-breaking heatwave hits the UK, while the deputy prime minister said schools should not close and people should be resilient enough to “enjoy the sunshine”.

Transport services are expected to be disrupted on both Monday and Tuesday, with Network Rail asking people not to travel unless absolutely necessary and painting some train tracks white to try to prevent them from buckling in the heat.

Dominic Raab said people should take precautions, but insisted that they should also be able to enjoy themselves.

“Obviously there is some common-sense practical advice we are talking about: stay hydrated, stay out of the sun at the hottest times, wear sun cream,” he told Sophy Ridge on Sunday. “We ought to enjoy the sunshine and actually we ought to be resilient enough through some of the pressures it will place.”

But the chief executive of the College of Paramedics, Tracy Nicholls, warned that the heatwave posed real danger, particularly to the vulnerable such as elderly people.

“This isn’t like a lovely hot day where we can put a bit of sunscreen on and go out and enjoy a swim or a meal outside,” she said. “This is serious heat that could actually ultimately end in people’s deaths because it is so ferocious and we’re just not set up for that sort of heat in this country.”

Meteorologists have given an 80% chance of the mercury topping the UK’s record temperature of 38.7C, set in Cambridge in 2019, with temperatures in London expected to hit 40C on Tuesday.

Scientists said the link between climate change extreme heatwaves was now clear. “This shows the UK is already on a warming trend when it comes to heat extremes,” said Dr Mark McCarthy from the Met Office. “Human-caused climate change has set us on a course to see temperature extremes in the UK that would be highly unlikely under a ‘natural’ climate.”

The new health secretary, Steve Barclay, said extra measures were being put in place for ambulance services, including the provision of more call handlers and extra working hours.

Nicholls said the announcement was welcome, but added: “I don’t know how that money will translate into hours, because it’s quite late in the day, quite honestly.”

Victor Adebowale, the NHS Confederation chair and crossbench peer, said that many hospital buildings in the UK were not equipped for extreme heat.

“In many cases you’ve got buildings that are unsuited to deal with the normal business of getting patients treated in and out, let alone in the hot weather,” he told Times Radio. “It’s not just hospitals, primary care and GPs; many of them are in very old buildings, which don’t have proper air conditioning or fans.”

He added the forecast for next week was a “shot across the bows” for the country. “It’s a warning. We need to be ready for this to be happening more frequently as a regular thing,” he said. “It’s not going to be fun for a lot of people over the next couple of days.”

Temperatures across the UK began rising on Sunday as an amber weather warning for extreme heat came into force in England and Wales.

The UK’s first red extreme heat warning has been issued across a large part of England for Monday and Tuesday, while an amber warning initially covers all of England on Sunday and extends to southern Scotland and Wales from Monday until Tuesday.

The UK Health Security Agency has increased its heat health warning from level three to level four, meaning “illness and death may occur among the fit and healthy, and not just in high-risk groups”.

The public have been urged to take care when swimming to cool off after a teenage boy died while swimming with friends in Salford Quays on Saturday, and a man remains missing after entering a reservoir in West Yorkshire. Emergency services in Northumberland said they were searching the River Tyne on Sunday after concern over a man in the water in Ovingham.

Ministers held a virtual emergency Cobra meeting on Saturday after meteorologists warned that the record high temperatures could put lives at risk.

The Cabinet Office minister, Kit Malthouse, who chaired the meeting, said transport services would face significant disruption on Monday and Tuesday and urged people not to travel.

He added that schools were being issued with guidance to enable them to remain open, although it is expected that many will close early and relax uniform rules.

Labour’s deputy leader, Angela Rayner, accused the prime minister of going “missing in action again … while Britain boils” as he did not attend the meeting and instead held a farewell party at his country estate.
#Dominic Raab  #Raab
Add Comment