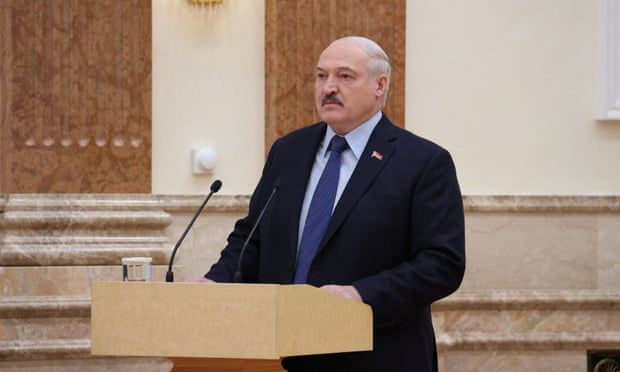 The Belarusian chief of the general staff, Maj Gen Victor Gulevich, and three other deputy defence ministers will all face sanctions, along with two military enterprises.

The EU – with which the UK has been working in close cooperation over sanctions – is likely to take similar measures. Belarus has been used as a base for Russian soldiers to pour into Ukraine. Soldiers from the Belarus army have joined the invasion.

The Foreign Office described Gulevich as responsible for directing the actions of the Belarusian armed forces, which have supported and enabled the Russian invasion of Ukraine. “He has directed joint military exercises with Russia, and consented to the deployment of Russian troops along the border of Belarus with Ukraine, which has directly contributed to Russia’s ability to attack Ukraine, including from positions in Belarus,” the Foreign Office said.

The two state enterprises being sanctioned by the UK are JSC 558 Aircraft Repair Plant and JSC Integral, a military semiconductor manufacturer. JSC 558 provides maintenance and servicing to military aircraft at Baranovichi airbase, from which Russian aircraft operated as part of the invasion.

The UK has already sanctioned more than 100 Belarus government members for throwing thousands of citizens into jail for protesting stolen elections in August 2020, and there are now signs that the US is willing to use the power of the dollar to start crashing the Belarus economy in the way that has been attempted with the Russian economy.

The US Treasury this week designated two large state-owned banks in Belarus, Belinvestbank and Dabrabyt, as subject to sanctions. It has already imposed five waves of sanctions on Belarus and claims to have sanctioned 24 Belarusian individuals and entities specifically in response to Belarus’s support for and facilitation of Russia’s invasion of Ukraine.

Liz Truss, the British foreign secretary, also acted on Tuesday to use newly passed laws immediately to target Russia’s biggest bank, Sberbank, in effect cutting the bank out of the UK’s financial markets.

Measures are also being enacted in close alignment with the US, EU and other partners which will collectively cut off much of Russia’s hi-tech imports, constraining Russia’s military-industrial and technological capabilities for years to come.

Truss claimed: “We are inflicting economic pain on Putin and those closest to him. We will not rest until Ukraine’s sovereignty and territorial integrity is restored. The [Alexander] Lukashenko regime actively aids and abets Russia’s illegal invasion and will be made to feel the economic consequences for its support for Putin.

“There will be nowhere to hide. Nothing – and no one – is off the table.”
Add Comment