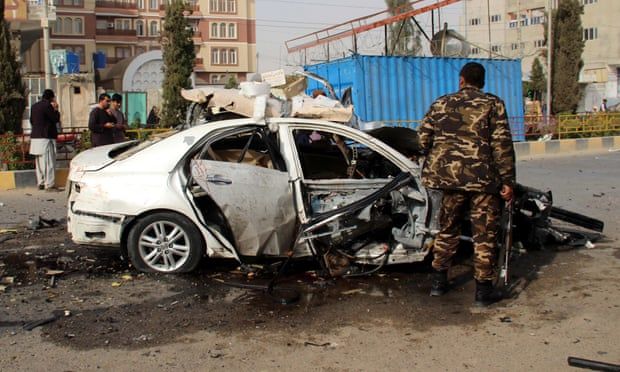 U-turn over those who worked for British media follows outcry from newspapers and broadcasters
The foreign secretary has agreed to consider allowing Afghan journalists who worked for the British to flee to the UK if their lives are endangered by the resurgence of the Taliban, after an outcry from a coalition of British newspapers and broadcasters.

raab">Dominic Raab signalled the policy U-turn on Friday, saying he recognised the bravery of the Afghan journalists. A scheme that was set up to offer a safe haven to Afghans who worked with the British will be expanded to include those who worked as journalists.

“We recognise the bravery of Afghan journalists and those that have worked tirelessly to support them in the pursuit of media freedom and the defence of human rights. The vibrant Afghan media is one of the greatest successes in Afghanistan in the last 19 years, and it should be celebrated and protected,” he said.

The comments came after UK media organisations, including the Guardian, wrote an open letter to Raab and johnson">Boris Johnson expressing concern for the safety of many of the journalists who had worked for them in Afghanistan during the conflict there.

In response, Raab said: “Your letter highlighted the threat faced by Afghan staff who have worked for your media organisations in Afghanistan, in particular the risk of reprisals they face from the Taliban from their association with the UK.”

In the open letter, each of the UK’s major newspapers and broadcasters wrote that their ability to keep the British public informed of events in Afghanistan over the past two decades had been “heavily reliant on the loyalty and commitment of the Afghan journalists, translators and support staff”.

The organisations added: “They were committed to the vision, shared by the British government and its Nato allies, of a free media as a vital part of a stable, peaceful democracy.”

The letter warned that fighting was worsening in Afghanistan and, with government forces having lost control of more than half the country, there are “very real fears of brutal Taliban reprisal against those who worked for British media organisations” once British and Nato units pull out.

“In recent years, the Taliban have masterminded a campaign of targeted killings against reporters. Prominent victims include Helmand-based reporter Elyas Dayee, who was a vital contributor to much of the UK and international coverage from the province where Britain focused its military effort. He was murdered last year. The Pulitzer prize-winning photographer Danish Siddiqui was killed in Afghanistan and his body mutilated in Taliban custody last month.”

Raab’s announcement also coincided with the killing of the head of the Afghan government’s media information centre on Friday. Citing the Afghan interior ministry, Agence France-Presse reported that the Taliban shot Dawa Khan Menapal days after warning they would target senior administration figures in retaliation for increased airstrikes.

Suhail Shaheen, a Taliban spokesperson, said: “We are committed to freedom of speech and protection of impartial journalists, whether freelance or affiliated with private media outlets, and their activities. They are needed in a new Afghanistan. The policy is clear in this regard. I don’t know whether Kabul administration journalists fall under this category.”
#Boris Johnson  #Dominic Raab  #Afghanistan  #Raab  #Johnson
Add Comment