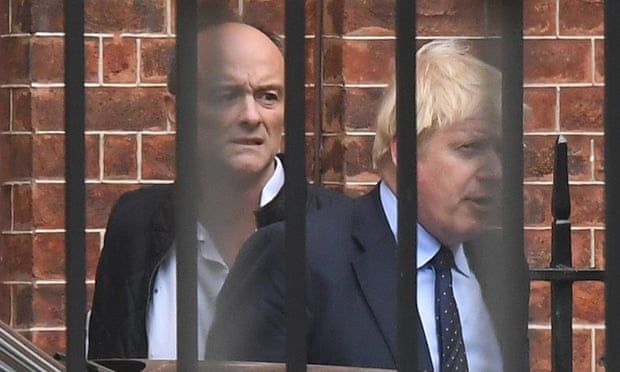 Analysis: attacks by PM’s former adviser echoed by Tory insiders who say No 10 operation is chaotic
Two years ago Dominic Cummings became the most powerful man in Downing Street – apart, perhaps, from the prime minister himself.

And this week he marked that anniversary with what one former colleague described as a “jihad on Boris”, apparently not caring that he might be torpedoing his own reputation in seeking to shred that of his former boss.

In his revealing BBC interview, Cummings claimed that even in 2020, just weeks after the general election, he and a group of allies were discussing how they could remove the prime minister, rather than be turfed out by Boris Johnson’s then fiancee.

Even close allies of Cummings insist they knew nothing of such plans. “I never got wind of anything,” said one former colleague, while another exasperated friend said: “Dom’s just speaking for Dom.”

A person who worked on Johnson’s successful election campaign poured cold water on the idea that Cummings was plotting a coup after December 2019, saying the mood was one of “general euphoria”.

But they said Cummings and others around him had grown disillusioned with Johnson by the end of that year, which was when the No 10 power struggle began between the Vote Leave crowd and those around Carrie Symonds, now Johnson.

It was at that point that rumours started to surface that some in Downing Street would prefer to see Rishi Sunak, the chancellor, in the top job and believed Johnson was not up to it.

Former insiders have corroborated many other aspects of Cummings’s account: the prime minister’s obsession with press headlines, his tendency to change his mind, and the immense power wielded by his partner.

And they claim that in the days after the “get Brexit done” election, the prime minister was in no hurry to get his new administration off to a flying start.

“We wanted the focus to be on a big reshuffle, on policy – get things going. And him being him, was like, ‘I’m going to go on holiday to Mustique, I’m going to put my feet up for a month,’” one former colleague recalls.

Another highlights giving the go-ahead to HS2 as a decision that was handled well, with close engagement between No 10 and sceptical MPs who needed to be won over. But they added: “There wasn’t any immediate switch into ‘It’s delivery time’. It all felt a bit slow off the mark and like, ‘Let’s have a bit of time to get over the election.’”

One of Cummings’ most eye-catching claims was that the prime minister considers the Daily Telegraph, which once paid him £250,000 to write provocative columns, to be his “real boss”.

Former government insiders agree that Johnson can get hung up on negative news coverage. “He can be very easily frustrated by headlines, and he could spend all day dissecting the papers and getting angry about things,” said one.

Endorsing Cummings’ description of Johnson as veering from one decision to another like a shopping trolley smashing between aisles, the former insider added: “I definitely think Boris needs strong structure around him, to guide him. He needs people to channel and direct his energy, rather than it being – for example – a trolley.”

Since the departure of Cummings and another key Johnson adviser, Lee Cain, as well as a string of other former senior members of his team – including Lord Lister, his ex-chief of staff, and Ben Gascoigne, former political secretary – Tory backbenchers and other senior party figures fret that the prime minister’s approach to government has become erratic.

They cite the quickfire U-turn after Johnson decided not to self-isolate last weekend; his much-vaunted levelling up speech, which offered little policy content; and the failure to reach an agreement on how to fix the crumbling social care system.

Carrie Johnson and policy director Munira Mirza are now the only members of the prime minister’s inner circle remaining since he won the leadership and general elections back in 2019.

“[Carrie]’s got strong views on people and we all suspect it matters whether you’re in her favour or you’re out of it,” said one Conservative MP who believes his prospects are being stymied.

He said the feeling among Conservatives was there was “no grip or political direction,” apart from that provided by allies of Carrie Johnson. These include Simone Finn and Henry Newman in Downing Street, plus a wider network of special advisers who are close to her, as well as Sajid Javid, now the health secretary.

“You can see with the people that you’ve got around him that she does have huge influence,” said a former Johnson adviser. Another described a fraught atmosphere inside No 10, with rival camps and complex loyalties. “It’s proper medieval-court stuff.”

It is difficult to find Conservative MPs who are complimentary about the way the government is being run, even among some of the prime minister’s supposed allies.

One senior Tory who helped with Johnson’s leadership campaign described No 10 as “utterly rudderless” and lacking logic over the last six months. “There’s just so little sense that there is a clear plan, as we’ve changed it so often now that we don’t know where it begins and where it ends.”

Another described the operation as “a bloody shambles and a disgrace” with “no long strategy at all”, especially on education.

With Cummings out of the way, many MPs had hoped that Dan Rosenfield, a former civil servant brought in as Johnson’s chief of staff, would get a grip on the operation. But several Tory MPs said they felt he was not political enough to spot problems on the horizon with the parliamentary party, or influential enough with Johnson. Rosenfield is widely expected at Westminster to be moved on in the coming months.

“The PM’s in a massive flap because he knows he’s got a situation where he’s surrounded by people who are not really up to it,” said a senior Tory.

Some backbench Tory MPs are exasperated by what they see as the hand of the prime minister’s wife in blocking their chances of promotion and advancement.

But with a series of key decisions to be made over the summer – including critically how to pay for repairing the broken social care system – other senior Tories insist it is Johnson alone who must take responsibility for the chaotic state his No 10 operation is in.

And they added that many of the accusations levelled by Cummings against his wife could equally be made against Cummings himself.

Citing claims that Carrie instructed the Downing Street press office to rebut a story about her dog, Dilyn, the former aide said: “Dom got the entire of the No 10 machinery, including the cabinet, who were by the way dealing with a pandemic, and bent them for a solid week to defend him over Barnard Castle. He spent an entire week pointing the entire government machinery towards him – I mean, give me a break.”
#Boris Johnson  #Johnson
Add Comment