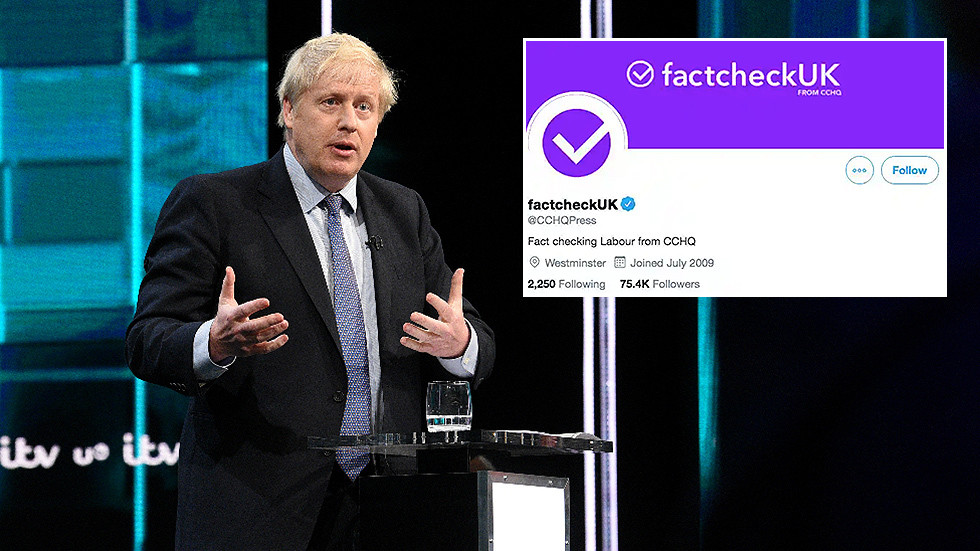 The Conservative Party has been accused of misleading the British public by changing its Twitter to resemble an independent fact-checking organization during a televised election debate between Boris Johnson and Jeremy Corbyn.

Twitter said the Conservative Campaign Headquarters press office account, which has over 75,000 followers, misled the public with a last-minute rebranding of their social media account to 'FactCheckUK'. The face swap came complete with a white tick avatar against a purple background, and it took place as the televised election debate between Tory leader Boris Johnson and rival Labour Leader Jeremy Corbyn began.

Only users who clicked through the account itself would see the disclaimer: “fact checking Labour from CCHQ”

"We have global rules in place that prohibit behavior that can mislead people, including those with verified accounts. Any further attempts to mislead people by editing verified profile information - in a manner seen during the UK Election Debate - will result in decisive corrective action."

The account reverted to the original branding once the debate had concluded.

The Tories are facing a deluge of criticism for the stunt. Google-funded fact-checking agency Full Fact labelled the rebrand “inappropriate and misleading,” while the Labour Party tweeted: "The Conservatives' laughable attempt to dupe those watching the #ITVDebate by renaming their twitter account shows you can't trust a word they say."

Black Mirror writer Charlie Brooker decided to mock the egregious and blatantly obvious trickery by changing his own Twitter profile, to the same Fact Check UK Branding, adding the tagline, “Fact checking and shit,” while also tweeting a reference to George Orwell’s 1984.

We have always been at war with Eastasia.

Many other Twitter users also changed their display names in a variety of different ways. Tony Blair’s former spokesman, Alastair Campbell, changed his to 'Boris Johnson' and tweeted: “I won’t get Brexit done #FactCheck”.