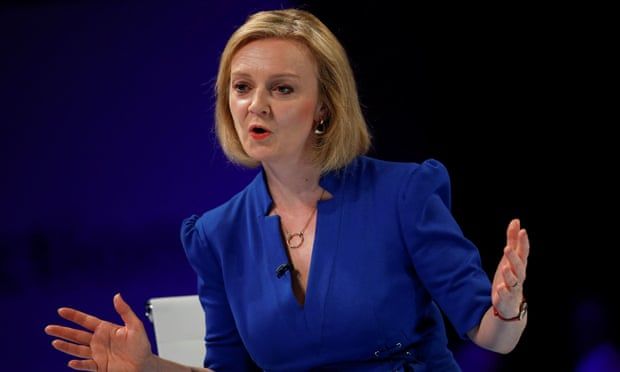 Liz Truss suffered a humiliating setback in her bid to become the next prime minister on Tuesday, as she was forced into a U-turn on civil service pay after a backlash from within her own party.

The foreign secretary swiftly abandoned the cornerstone of her plan for a “war on Whitehall waste” when it was revealed it could lead to pay cuts for millions of teachers, nurses and police officers.

But it was scrapped within hours, after analysts pointed out the purported £8.8bn saving from the policy was only remotely achievable by cutting wages across the public sector.

With ballot papers dropping this week, Truss is widely regarded as the frontrunner in the race to succeed Boris Johnson; but one new poll put her just five points ahead of Rishi Sunak, while Conservative MPs say many members remain undecided.

The Teesside mayor, Ben Houchen, a popular figure within the party and a Sunak backer, said he was “speechless” at the policy, which he said would work against the flagship Conservative policy of levelling up.

“There is simply no way you can do this without a massive pay cut for 5.5 million people – including nurses, police officers and our armed forces outside London. So much that we’ve worked for in places like Teesside would be undone,” he said.

“Red wall” MPs including Jacob Young and Richard Holden had also raised alarm at the policy announced overnight, as well as the former cabinet minister Simon Hart, who said it would amount to cuts of nearly £3,000 for workers in Wales.

Truss abruptly withdrew the policy on Tuesday, little more than 12 hours after it had been floated, claiming in an awkward interview that it had been “misrepresented”.

“There has never any intention to affect teachers and nurses, but I don’t want to worry people, I don’t want people to be concerned, so I am being very clear that we will not be going ahead with the regional pay boards,” she told ITV.

Asked if the move was a U-turn, she said: “I’m someone who is honest and upfront, and I do what I say I will do, and I am being clear, I will not be doing that.”

Truss had previously appeared to be cruising to victory in the race, picking up the support of cabinet colleagues Ben Wallace and Brandon Lewis, and her former leadership rivals Penny Mordaunt and Tom Tugendhat, in recent days.

Sunak meanwhile has announced a series of increasingly hardline promises in a bid to stay in the race, including capping the number of refugees, doubling the number of foreign criminals deported and taking on what he called “leftwing agitators” in a culture war over gender identity.

His campaign team responded to Truss’s statement with barely disguised glee, with a spokesperson claiming the misstep showed, “a lack of serious judgment” and “a worrying lack of grip on detail in what is already a woolly economic plan”.

“If this was in a general election, it would have been a potentially fatal own goal for the Conservatives,” they added, suggesting Truss had supported the policy since 2018 when she was chief secretary to the Treasury.

Several Sunak supporters compared the turn of events to Theresa May’s dementia tax – the deeply unpopular plan to fund social care that contributed to the Tories losing their majority in the 2017 general election.

Mark Harper, the former chief whip who is supporting Sunak, said scrapping the proposal also meant there was now an £8.8bn hole in Truss’s tax and spending plans.

“An economic policy that can’t be paid for isn’t very Conservative. Mrs Thatcher would be livid,” he said, accusing Truss of “blaming journalists” for misconstruing her plans.

The Lib Dem leader, Ed Davey, said: “U-turning on a multibillion-pound policy five weeks before even taking office must be a new record. We can’t let Liz Truss run the country with the same incompetence she’s running her leadership campaign. The British people must have their say in a general election.”

Labour said the original plan would have meant a £7.1bn hit to local economies across Yorkshire, the north and the Midlands. Angela Rayner, the deputy leader, said: “Liz Truss is a liability who has lingered in this Tory cabinet for nearly a decade in which the Tories have fuelled a cost of living crisis.”

Alex Thomas, a programme director at the Institute for Government thinktank, pointed out that the whole annual civil service pay bill was about £9bn.

Tony Wilson, director of the Institute for Employment Studies, said Truss’s policy appeared to date back to a time when public sector pay outstripped the private sector’s – but the latest data showed it was £20 a week lower on average.

The new leadership poll, including 807 Conservative members, was conducted by Techne for a private client, and showed just a five-point gap between the two candidates. Separate polling by YouGov for the Times on Tuesday, before the U-turn, had the foreign secretary with a huge 34-point lead, and 60% of the membership saying they would vote for her.

Truss gained the backing of the Daily Mail on Tuesday, having already won the support of the Telegraph.

Signs her public sector pay policy was in difficulty began on Tuesday morning when Rees-Mogg, a backer of Truss and the minister in charge of civil service efficiencies, said it was “not the plan at the moment” to cut pay for the wider public sector to make savings of £8.8bn promised by Truss. “The discussion at the moment is around civil servants,” he said.

In the original release, which proposed regional pay boards, Truss said she would “tailor pay to the cost of living where civil servants actually work” and this would save up to £8.8bn.

It said the policy could be “adopted for all public sector workers in the long term”.