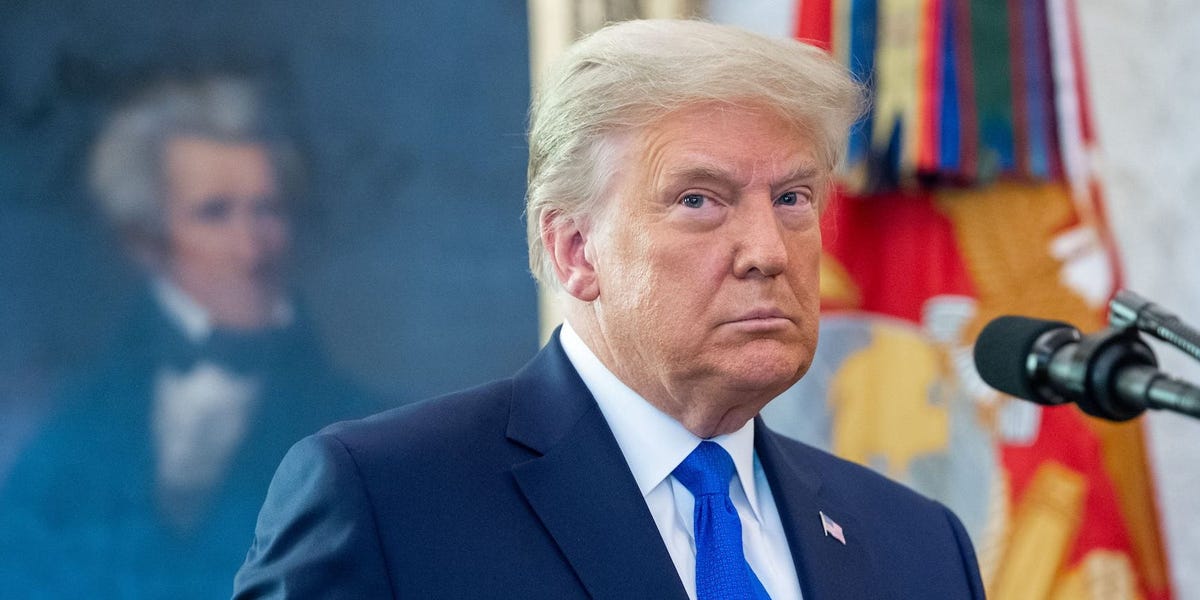 President Donald Trump claimed on Tuesday that a speech he gave at a rally last week that incited a mob of his supporters to storm that Capitol was "totally appropriate."
"People thought that what I said was totally appropriate," the president told reporters at the White House before leaving to visit the US border wall in Alamo, Texas.

"If you look at what other people have said, politicians at a high level, about the riots in the summer, the horrible riots in Portland and Seattle and various other places, that was the real problem, what they said," he added, referring to the largely peaceful antiracism demonstrations that swept the country last year after the police killing of George Floyd.

He added that the House of Representatives' push to impeach him after he incited the deadly insurrection is "absolutely ridiculous," adding that there was "tremendous anger" over the impeachment talks, though he didn't specify who was angry.

Trump also said, "On the impeachment, it's really a continuation of the greatest witch hunt in the history of politics."

"I think it's causing tremendous danger to our country," he said, adding, "I want no violence."

The House is expected to pass a resolution Tuesday evening calling on Vice President Mike Pence to immediately invoke the 25th Amendment and remove the president from office, which he is unlikely to do. If he doesn't act, the House will begin impeachment proceedings against the president later this week.

Trump was previously impeached over his efforts to strongarm the Ukrainian government into launching politically motivated investigations targeting the Bidens ahead of the 2020 election. The House impeached Trump for abuse of power and obstruction of Congress, and the Republican-controlled Senate acquitted him. If he's impeached this week, Trump will be the only US president to have been impeached twice during their time in office.

Since losing his massive social media megaphone in the wake of the Capitol riot, Trump has been relatively silent in the last several days, privately stewing over his de-platforming and believing that it will galvanize his supporters.

Ahead of the attempted coup last week, the president egged his supporters on at a rally and told them to march to the Capitol to stop Congress and Vice President Mike Pence from counting the 2020 electoral votes.

The riot resulted in five deaths, including a 42-year-old Capitol Police officer who died after Trump supporters beat him with a fire extinguisher. Twitter permanently banned Trump from its platform, citing the risk of further violence, and Facebook and Instagram also blocked him from posting. The far-right app Parler, which is popular among right-wing figures, Trump supporters, neo-Nazis, and violent extremists, was booted from the Apple and Google app stores, as well as from the Amazon's cloud hosting service.

The fintech company Stripe stopped processing Trump campaign donations in the wake of the insurrection, and a slew of companies halted donations to Trump and other Republican lawmakers who supported his longshot bid to overturn the election results and steal back the White House.

The FBI also said in an internal bulletin obtained by ABC News that Trump supporters were planning "armed protests" at the US Capitol and at all 50 state capitols leading up to January 20. HuffPost reported that Capitol Police briefed Democratic lawmakers on Monday night about more potentially violent demonstrations being planned, including one plot that would involve insurrectionists surrounding the Capitol, White House, and Supreme Court, and assassinating Democrats to give Republicans control of the US government.

The Pentagon said Monday that it will review troops scheduled to be deployed to Biden's inauguration to make sure they don't have ties to domestic terrorists. And the head of the National Guard said that at least 10,000 to 15,000 guardsmen will be sent to Washington, DC, by Saturday to support local forces heading into the inauguration.

Two crossed lines that form an 'X'. It indicates a way to close an interaction, or dismiss a notification.
#Donald Trump
Add Comment