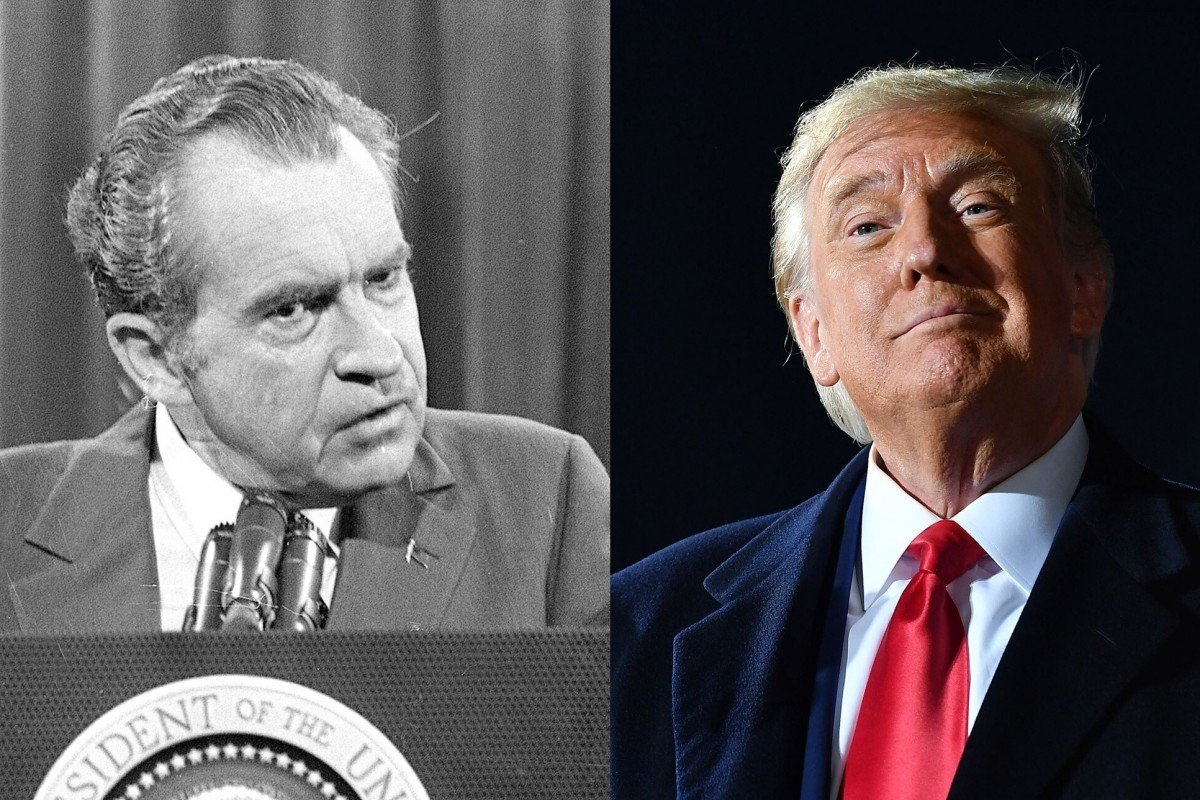 The once and future US presidents kept up a decade-long correspondence meandering from football and real estate to Vietnam and media strategy.

They were two men in Manhattan who craved the same thing: validation. One was a brash, young real estate developer looking to put his stamp on New York, the other a disgraced elder statesman bent on repairing his reputation.

That is how a thirty-something Donald Trump and a seventy-ish Richard Nixon struck up a decade-long, fulsome correspondence in the 1980s that meandered from football and real estate to Vietnam and media strategy.

The letters between once and future presidents, revealed for the first time in an exhibit that opens Thursday at the Richard Nixon Presidential Library & Museum, show the two men engaged in something of an exercise in mutual affirmation. The museum shared the letters exclusively with Associated Press ahead of the exhibit’s opening.

“I think that you are one of this country’s great men, and it was an honour to spend an evening with you,” Trump writes to Nixon in June 1982, less than eight years after Nixon resigned the presidency during the Watergate scandal. The two had been spotted together at the “21” nightclub and Trump was writing Nixon to thank him for forwarding a photo. 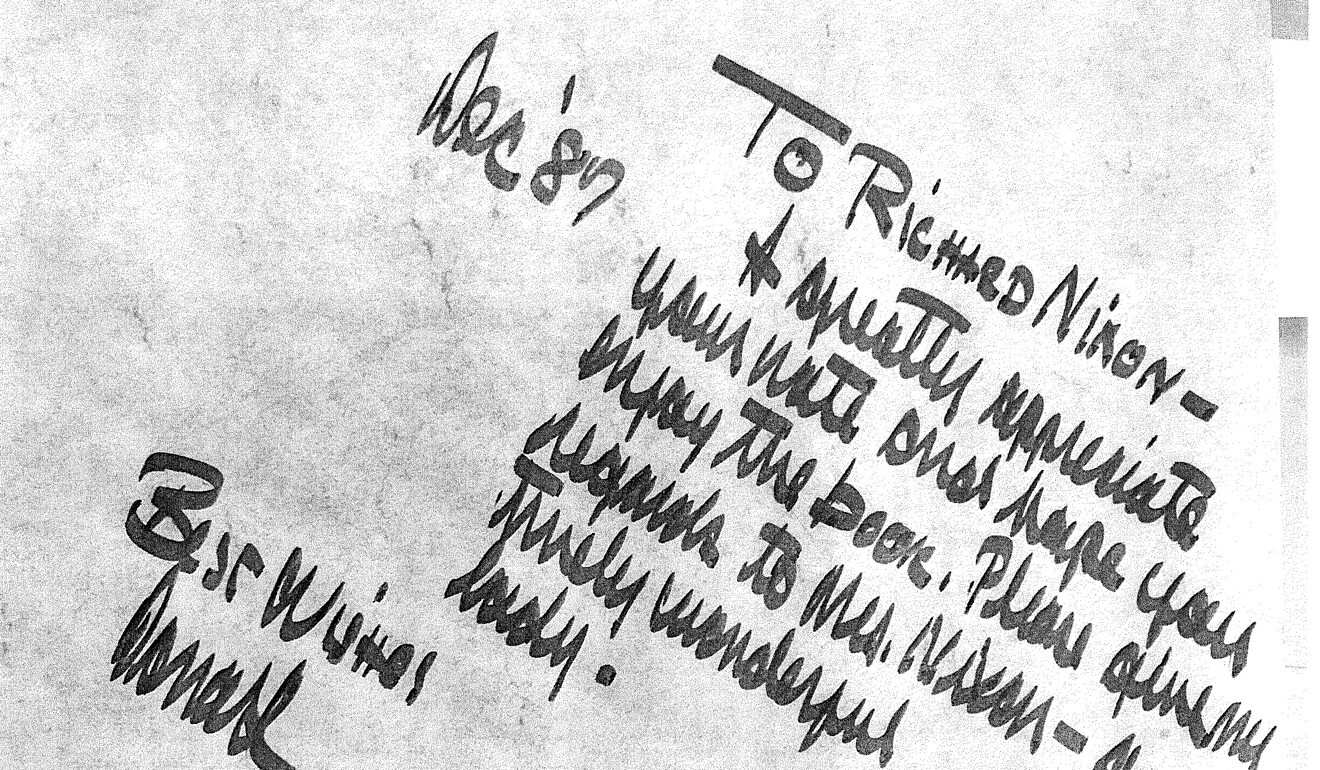 A copy of one of the letters between Donald Trump and Richard Nixon.

The next autumn, it is Nixon chiming in.

“Let me be so presumptuous as to offer a little free advice (which is worth, incidentally, exactly what it costs!)” Nixon writes to Trump.

Nixon, who played football in college and never lost his love for the game, then unspools detailed thoughts on how Trump should handle the New Jersey Generals football team that he had recently bought and would fold by 1986. (Nixon included plenty of shout-outs for the underappreciated linemen, his old position.)

Trump, for his part, is unabashed about one of his aims for the relationship: “One of my great ambitions is to have the Nixons as residents in Trump Tower,” he writes that October.

But after the Nixons toured Trump’s flagship development on Fifth Avenue, the ex-president wrote that his wife “was impressed as I was but feels at this time she should not undertake the ordeal of a move”. She had suffered a mild stroke that August.

So it went, the patter of “Dear Donald” and “Dear Mr. President.”

Trump, putting his usual self-congratulatory stamp on the exchanges, said soon after the 2016 election that he did not know Nixon “but he would write me letters. It was very interesting. He always wanted me to run for office.”

Trump vs Biden: The 2020 US presidential election

What motivated the correspondence between a young man seeking a bright future and an ex-president with a dark past? Nixon expert Luke Nichter, a professor at Texas A&M-Central Texas, says the two men “saw something similar in each other – that toughness, that guts, even being beaten up and coming back.”

Their letters did not have far to travel as they criss-crossed Manhattan: Trump wrote from his office in Trump Tower; Nixon from his at Federal Plaza, about four miles (6.4km) away.

The two men bonded over themes that resonate today: a shared distrust of the media, a desire to maximise television ratings, the idea of using people as “props”, and more. 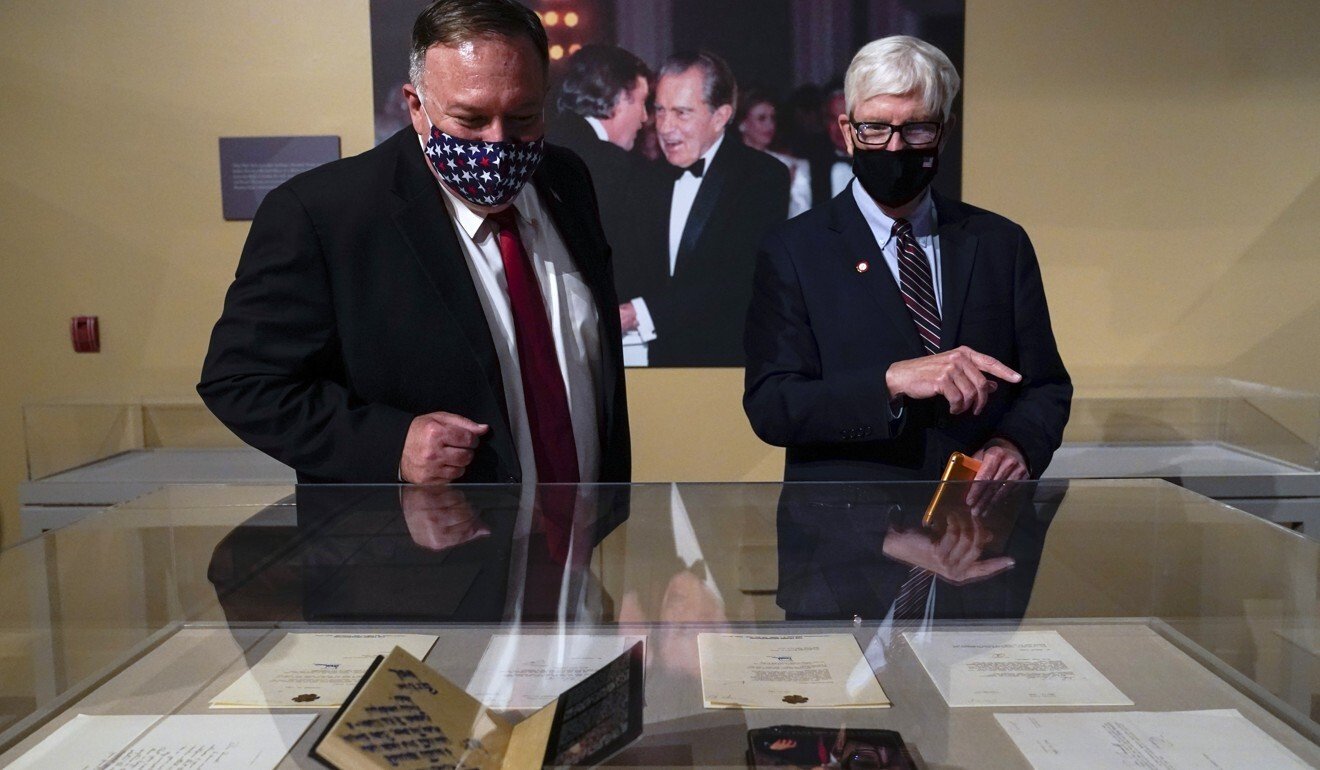 US Secretary of State Mike Pompeo (left) tours an exhibit at the Richard Nixon Presidential Library in California on Wednesday with Hugh Hewitt, president and CEO of the Nixon Foundation.

Writing about the Generals’ broadcast potential, Nixon tells Trump: “The people in the stands, apart from what they pay for their tickets, are indispensable props for the television broadcast which in the future is where the real money lies.”

It was a powerful lesson from a past president for a future one who would shamelessly inflate his reputation as a mogul over 14 seasons on The Apprentice and later turn his presidency into its own reality show.

The two men commiserated over their shared mistrust of the press. In 1990, Nixon reached out to Trump when the developer’s business deals were tanking and he could not pay his bills, writing: “Dear Donald – I know nothing about the intricacies of your business enterprises but the massive media attack on you puts me in your corner!”

Trump, even now, is never one to let a grievance against the press go unaired, his strained relations with the media unsurpassed by Nixon or other presidents.

Whatever bound the two men as friends, their letters serve as a sort of inkblot test for readers.

John Dean, well versed in Nixon’s personality after serving as his White House counsel during the Watergate years, sees his old boss and Trump picking up “the waves of each other’s personalities” in their letters.

“These are two authoritarian personalities who would have a natural affinity for each other,” said Dean, who helped expose the Watergate scandal and is a harsh critic of Trump.

Republican Newt Gingrich, familiar with both men, says Trump may have learned a bit of foreign policy from listening to Nixon, but he suspects the young developer also just liked the idea of knowing a historic figure.

“It was more a personal validation for Trump that he was becoming somebody, that a Nixon would pay attention to him,” Gingrich said.

The ‘Yiwu Index’: How a Chinese city could predict the result of the US Presidential election

Jim Byron, executive vice-president of the Richard Nixon Foundation, said the letters were located during two years of research in library archives that include 46 million pages of material, 300,000 photographs and 2 million feet of film.

They are the centrepiece of an exhibit – The Presidents Club: From Adams and Jefferson to Nixon and Trump – that also includes correspondence between five other sets of presidents.

Only one of the Trump-Nixon letters was widely known about previously – a two-sentence December 1987 note that Nixon writes after his wife saw Trump on Phil Donahue’s talk show. Pat Nixon thought Trump did “great”, Nixon writes.

“As you can imagine, she is an expert on politics and she predicts that whenever you decide to run for office you will be a winner!” Nixon adds.

Trump, always an open door for flattery, had the letter framed and on display in his office in Trump Tower. The White House did not respond to questions about whether Trump had the letter on display someplace now.

The last letter in the Trump-Nixon series is dated January 26, 1993. Trump writes to Nixon not long after his 80th birthday to thank him for a birthday photo and says, “You are a great man, and I have had and always will have the utmost respect and admiration for you. I am proud to know you.”

Nixon died in April 1994; Trump did not attend the funeral. 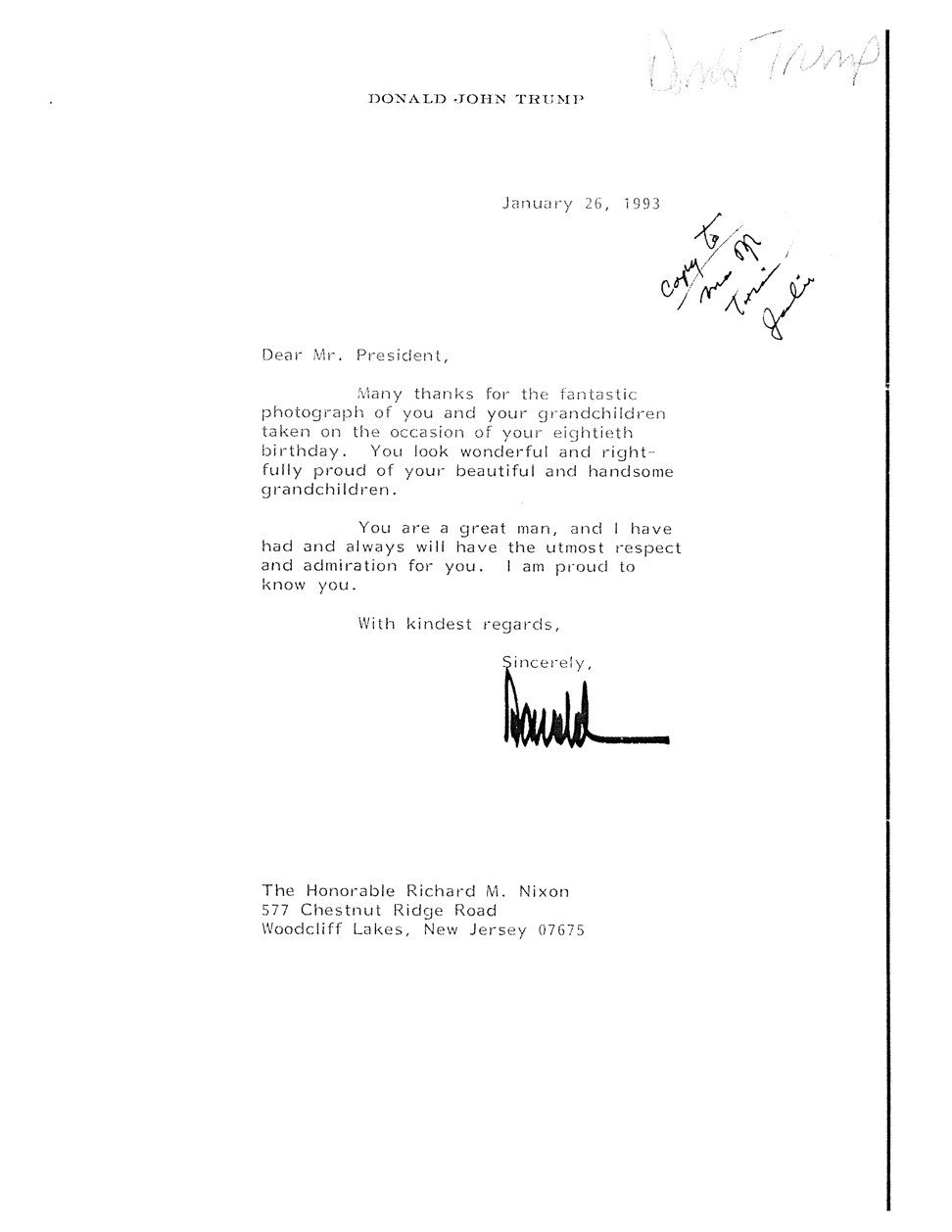 As for Trump’s public thoughts on Nixon, over the years he has blown hot and cold.

He echoed some of Nixon's dark themes during his 2016 campaign, and he is currently adapting Nixon's “silent majority” strategy for his own re-election campaign. Before the Republican convention in 2016, Trump spoke glowingly of Nixon's harsh rhetoric and tactics.

However, during his own impeachment saga last year, Trump drew a distinction between himself and Nixon, who resigned rather than be impeached.

“He left. I don’t leave. A big difference,” Trump said.

The White House declined to provide Trump comment on the newly released letters.

Nichter, the historian, says the letters reveal a surprisingly rich personal dimension to the Trump-Nixon relationship and add “one more piece to the puzzle” in figuring them both out.

Byron calls them “an invaluable contribution to the ever-evolving group that we know as the presidents club”.

And with Trump’s disinterest in taking advice from his predecessors, Byron says, the letters provide “perhaps the best documented relationship that our current president has with any of his predecessors”.

As for what the American people should take away from the back and forth, Byron does not bite: “We’ll leave that up to the historians, the academics and the masses on social media – which I’m sure will have a thing or two to say.”