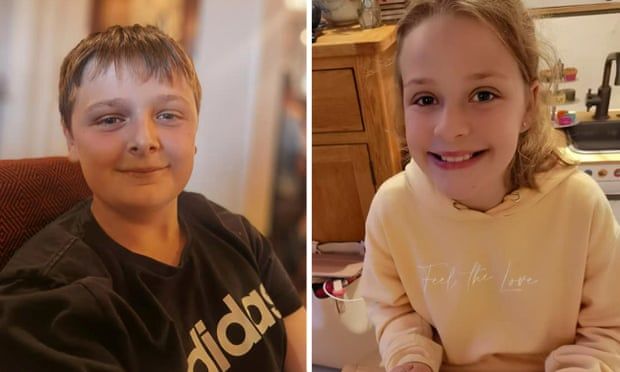 Tributes paid after deaths of woman and three children in Derbyshire

Tributes have been paid to three children and a woman who are suspected to have been killed at a house near Sheffield at the weekend.

A man, 31, was arrested on suspicion of murder after Derbyshire police were called to a property in Killamarsh, Derbyshire, at 7.25am on Sunday.

The force said a murder investigation had been launched but it was not looking for anyone else in connection with the deaths, although questions remained over how the four were killed. The force did not have any prior contact with those involved.

Police have identified the victims as Terri Harris, 35, her children John Paul Bennett, 13 and Lacey Bennett, 11, and Lacey’s friend Connie Gent, 11, from Sheffield.

Jason Bennett, the father of John and Lacey, collapsed in tears as he laid flowers at the police cordon around the property on Monday morning. Asked about his feelings as he left, he told reporters: “Heartbroken, million pieces, shattered.”

John and Lacey’s grandparents, Debbie and Trevor Bennett, were also at the scene. Debbie said: “We are just heartbroken. They were beautiful, well-mannered kids. Terri was a beautiful mother, a wonderful mother. We are just devastated.”

Debbie said Jason Bennett was on holiday in Devon at the time of the incident and returned home overnight. “He has lost everything,” she added.

Both the children enjoyed football, TikTok and walks with their dad, the grandparents said. Debbie said: “As far as Lacey goes, she was a proper girl, pink and sparkly. John was into computers. They were the most well-mannered kids you could hope to meet. They always said please and thank you. I don’t know how we are going to cope.” 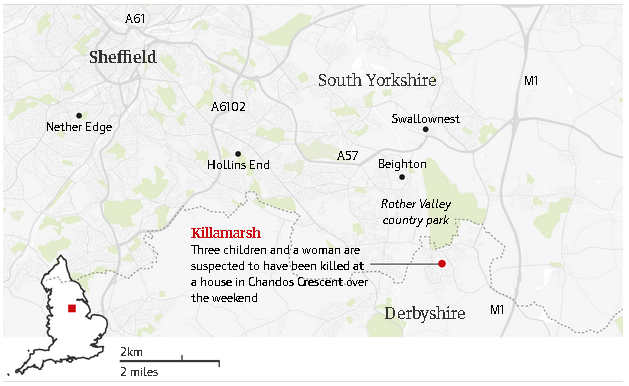 The third child victim was Lacey’s best friend, who was at the house for a sleepover, they said. “Their parents have got to be devastated. Just the same as us,” Debbie said.

Trevor said: “My son Jason is going to be in bits, he’s lost his entire family. He will be blaming himself, there will be the ‘what ifs?’ I don’t know how he’s going to come through this, he’s going to need a lot of strength.”

Outwood Academy City, a school for children aged 11 to 16 about fives miles away from the incident, said it would be closed on Monday after a tragic incident “involving three of our students”.

A spokesperson said: “Like the rest of the community, we are currently trying to come to terms with this weekend’s devastating events. The thoughts and prayers of everyone at Outwood Academy City are with those affected.”

Speaking at the cordon at the scene, the Derbyshire police chief constable Rachel Swann, said: “While understandably worrying and upsetting this is believed to be an isolated incident in which those involved were known to one another and nobody else is being sought in connection with the deaths.”

Swann appealed for anyone with information to come forward, adding: “Of particular interest is anyone who was in the Chandos Crescent area between 9.30pm on Saturday evening and 7.30am the following day and who may have information that would be helpful to the investigation.”The North East Derbyshire MP, Lee Rowley, offered his condolences after the “terrible and hugely tragic” incident. The Conservative MP also paid tribute to Killamarsh as a “lovely community” that would show its resilience.

“Killamarsh is such a lovely, close-knit and warm community, and I know that many residents will be shocked and worried by the news,” he tweeted. “I’ve no doubt that the village will pull together at this difficult time.”

A short walk from the scene, a steady stream of residents arrived at St Giles parish to pay their respects. The Rev Can Helen Guest, the rector of the church, said the community was “stunned” and “absolutely devastated” by the news.

She said: “How can you possibly put into words what one feels when you see on the news that four people have died. No one can possibly anticipate a tragedy like this, especially in our community. This is a very, very sad time for us all.”