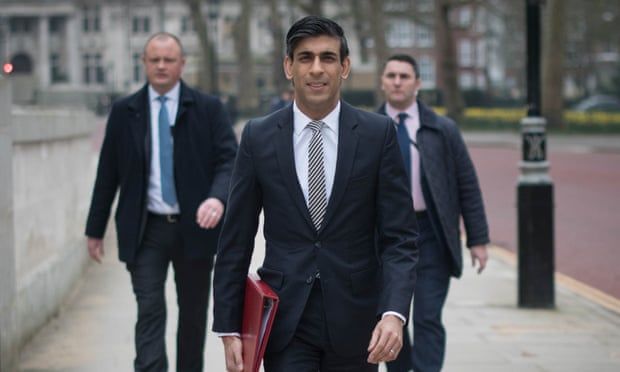 The Guardian understands Rishi Sunak has privately stressed to MPs that the tax rise must go ahead as planned – with one frontbencher who has met him in recent days speculating the chancellor’s position could become untenable if Johnson seeks to overrule him.

Treasury aides claim the embattled prime minister has not yet raised the prospect of cancelling or delaying the £12bn tax rise, with Johnson saying “there’s been no discussion at any level”.

Yet speaking in Wales on Thursday, the prime minister again refused to commit to pressing ahead with the 1.25 percentage point rise in national insurance contributions (NICs), which will be badged a “health and social care levy”.

Johnson said it was “absolutely vital” to find the money, saying: “We have to fund the Covid backlogs, we have to fix social care. Every penny will go to that end.” But when asked to confirm explicitly that the increase would go ahead as planned, he declined to do so.

One person with knowledge of the thinking in No 10 said there were no firm plans yet to change course on NICs – but predicted that Johnson would do so if he faced a vote of no confidence.

They said: “He’s shown enough leg now to make people stick with him on the right. Whether he actually does it or not will depend on whether he thinks he needs to do it to win the vote.”

Kwasi Kwarteng told the BBC on Thursday that there would be “no U-turn” on the rise.

The business secretary said: “We’re totally committed to funding the NHS, clearing the backlog of the NHS, and also funding social care and the way to do that is through this tax rise.”

Healthcare bosses have urged Johnson to ensure the resources get to the NHS. “Without this extra funding the public will face longer waits for treatment and hundreds of thousands of vulnerable people won’t get the care and support they need from social care services,” said Matthew Taylor, chief executive of the NHS Confederation. “But it is for the government to decide how best to fund this extra investment.”

Lord Crisp, a former chief executive of the NHS in England, said that “it is vital that the government … follows through with its commitment to the NHS and social care.” Johnson owes it to NHS staff to make good on his pledge in recognition of their hard work during the pandemic, he added. “All those warm words they have heard from the politicians need to be followed up by hard cash – and not by broken promises,” said Crisp.

However, Mel Stride, the Tory chair of the Treasury select committee, added his voice to those calling for the NICs rise to be postponed, saying “the stars have aligned” in favour of a delay.

But Treasury sources played down the idea that stronger-than-expected tax receipts have handed Sunak a windfall, which he could use to cancel or at least delay the increase. With interest rates rising, they point instead to the increasing cost of funding government borrowing.

The prime minister is under concerted pressure from Conservative rightwingers, including former Europe minister David Frost, and leader of the House of Commons Jacob Rees-Mogg, to cancel the tax increase, which was set in legislation in the autumn.

A government source said: “Ultimately, it’s obviously a decision for the PM.”

Johnson needs the support of backbenchers to stave off the threat of a leadership challenge in the coming days.

As well as cancelling the tax increase, others have been demanding that he water down the government’s net-zero policies.

Ryan Shorthouse, chief executive of Conservative thinktank Bright Blue, called on the government to widen the base of the health and social care levy – including rental income and pensions, for example – so that it could be set at a lower rate.

But he warned of the risk of the prime minister making decisions in the heat of the current leadership crisis. “He’s weakened: he’s completely now beholden to a lot of his backbenchers and what they’re pushing for,” he said.

Meanwhile, there is frustration in Whitehall that plans to tackle the cost-of-living crisis appear to have stalled, as the prime minister focuses on saving his premiership.

One government source suggested a planned meeting between Johnson and Sunak on the issue had been pulled this week, as the prime minister held a string of meetings with wavering colleagues in a bid to dissuade them from demanding a vote of no confidence in his leadership.

A spokesperson for Johnson denied the meeting had been cancelled, saying: “Definitely not. They’ve been meeting every week.”

But officials from across Whitehall report that decisions requiring No 10 signoff are being held up.

Sunak wrung the commitment to the increase from Johnson as the quid pro quo for the prime minister’s costly plan to tackle NHS waiting lists and cap the lifetime costs of social care.

MPs who have seen the chancellor in recent days say he has been categorical on the necessity for the rise to take place on time in April. One frontbencher said it was clear that the only person who might take a different course would be the prime minister.

Sunak has forced through a number of spending cuts in recent months, including the abandonment of the UK’s aid target of 0.7% of national income, and the reversal of the £20-a-week uplift in universal credit.

Widely seen as a potential successor to the prime minister, the chancellor has been less effusive in his public backing for Johnson than leadership rival Liz Truss.

Johnson was in Wales on Thursday, as his inner circle continued to wait for the investigation by senior civil servant Sue Gray into alleged lockdown-busting parties in Downing Street.

When it is published – now expected on Monday – a group of Tory MPs are expected to submit letters to the chair of the backbench 1922 Committee, Graham Brady, calling for a vote of no confidence.

If Johnson lost such a vote, which could be held within days, his premiership would be over.
#Boris Johnson  #Johnson  #Covid
Add Comment