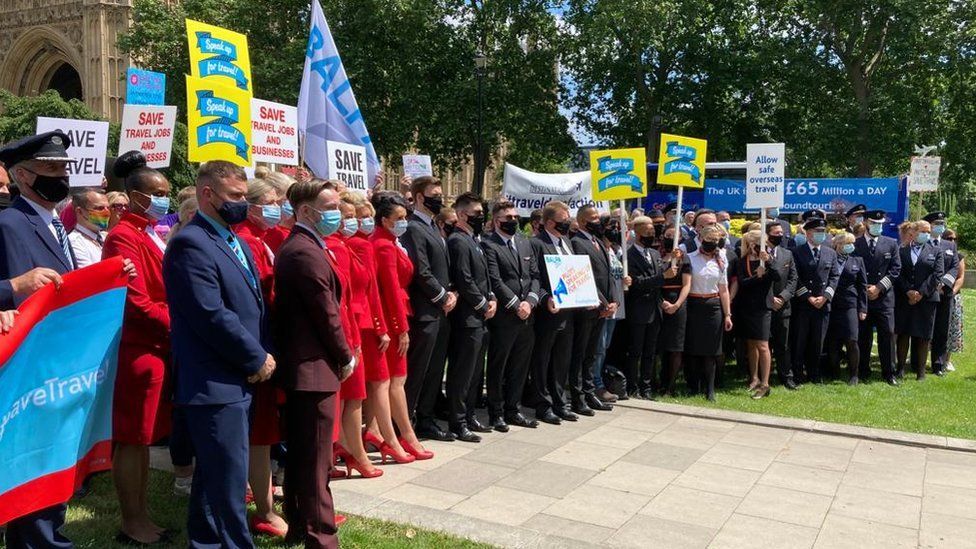 Airlines and travel companies say current limits on travel have had a devastating impact on the sector.

Ministers are due to update the traffic light system for international travel on Thursday amid calls for more countries to join the green list.

The government said it continued to explore how it could open international travel safely.

Most holiday destinations, including Spain, Greece and Italy, are on the government's amber list, meaning travellers have to quarantine when they return to the the UK.

As a result, the travel industry has dramatically scaled back its operations.

On Wednesday cabin crew, pilots, travel agents, airport staff and industry heads held what they described as a day of action.

Airport staff stood with placards on empty runways while others protested outside Westminster, Holyrood and Stormont.

They called on the government to offer the industry more financial support and increase the number of countries on the UK's green list, allowing passengers to travel without having to quarantine on their return.

One of the backers of the day of action was industry trade body Abta. The organisation's chief executive Mark Tanzer told the BBC: "The industry is going to need support to get through these critical months, particularly the summer season which is where most of the cash would normally come in.

"So extending the furlough arrangements for the travel sector, business rates relief and also looking at a really targeted financial support, a revenue replacement system."

The travel industry is nervous. The Westminster government is expected to announce updates to the green list on Thursday and no industry heads are feeling very optimistic.

Conversations do happen regularly between travel bosses and the government, but the industry still feels it is anyone's guess which way the meeting about international travel will swing, and whether any countries will be changed to green.

Summer, particularly school holidays, is the time when the industry makes most of its money. That key time is getting closer which is why the industry is getting even louder.

But the government has always said that its international travel policy is guided by protecting public health.

As long as ministers feel reopening is too much of a risk the green list will remain short.

The government said its international travel policy was guided by "one overwhelming priority - protecting public health".

"We keep all measures under review and continue to engage with industry and international partners to explore how we can open international travel safely.

"Both tailored and wider economic support is still available to the sector, including the furlough scheme."

"That would be a major step forward and I think it would create the confidence that people need to go ahead and book travel and travel over the summer," said Manchester Airports Group chief of staff, Tim Hawkins.

"Other countries are doing that, Germany, France, and at the moment that doesn't apply in the UK but it could and it would open up potential for travel for lots of people over the summer.

"So I think it's really important, but it needs to happen quickly."

Who are the demonstrators? 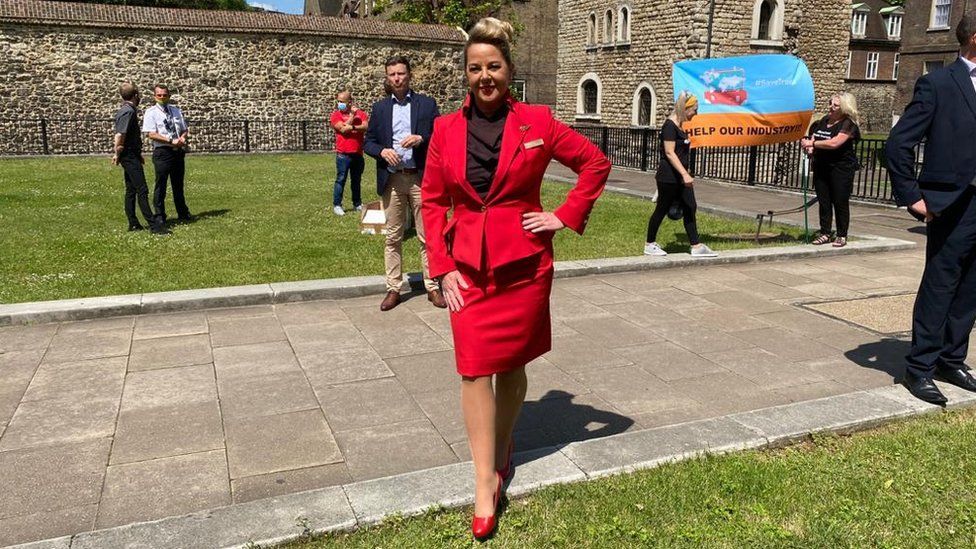 One of the demonstrators at Westminster on Wednesday was Lynn Sutherby who works for Virgin Atlantic as one of the cabin crew.

Over the last 15 months since start of the Covid pandemic she has been flying on and off and she has also retrained for the ambulance service and as a vaccinator.

"We have aircraft that are flying around empty. Although we're bringing in vital supplies and shipping that around to and from the country we need our customers - we need customers to be able to survive.

"So many jobs are at risk - thousands and thousands of jobs.

We have lots of colleagues who are in holding pools waiting to come back.

"The government need to act and they need to do something to open up travel."

The Transport Secretary has said that he will listen to scientific advice on whether having two vaccinations should enable people to travel internationally. He said the Government will review the data on this shortly.

Grant Shapps told the BBC: "If you've been double vaccinated then of course we need to look at what the science says... We've said that Monday is the point to review that data, so we are coming up to having a look at it."

He said, "We're looking at it in the next few days and I'll have more to say."

Asked about the travel industry, Mr Shapps said he was "massively concerned... which is why we've provided £7bn of support just for the aviation sector alone".