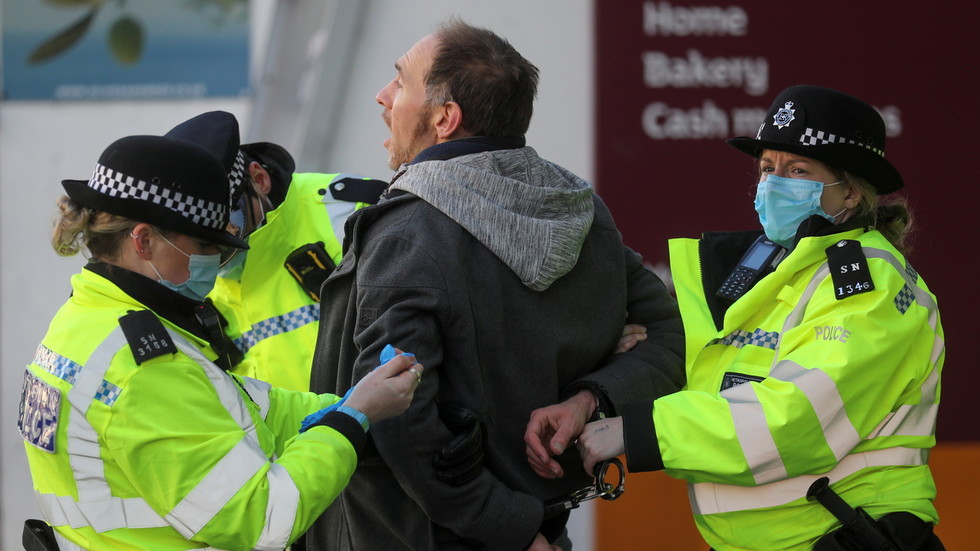 Shapps was confronted by Hartley-Brewer, who played a clip from one of his previous appearances on her show. On January 8, days after the government declared the ongoing national lockdown, the host asked him whether people concerned over their freedoms being stripped amid the pandemic should expect a turnaround after the groups most at risk from Covid-19 had been vaccinated.

Hartley-Brewer said at the time that all people over 70 were expected to have received the jab by mid-February and to have built up immunity in two three weeks. At that point, she proclaimed, “I want every single one of my freedoms back,” to which Shapps cheekily responded: “You and I will be joining each other on the barricades to get our freedoms back.”

“I will be right at the front of the queue to provide that, to scrap the bureaucracy, to remove unnecessary tests, to get people moving again,” he added.

As Shapps returned to the radio station on Wednesday, Hartley-Brewer pointed out that “we are not seeing anything more than children going back to school. We have to wait two more months before we can meet another household indoors!”

She asked whether she and Shapps would be joining each other at the barricades anytime soon, to which the MP responded that, in the just-played clip “we were talking about some date in May – I didn’t catch the detail there.” There had indeed been no mention of the month in their January exchange, but Hartley-Brewer’s premise clearly put the expected emergence from the lockdown sometime in March.

The host then went on the offensive, pointing out that, since January, there had been plenty of positive news about Covid-19 that should have made an early lifting of the lockdown more likely, not less. The government had outperformed its targets in terms of immunisation pace, for example, and new data indicated that a single dose of the vaccine was doing a better-than-expected job in curbing both serious cases of the disease and its transmissions.

Yet Westminster still insists that lifting restrictions now would cause a new lockdown down the road, she said. “Do you understand why many people don’t trust the government anymore?” Hartley-Brewer asked, referring to lockdown sceptics like herself.

"The goalposts are always moving, aren’t they? And they’re going to keep moving forever."

Shapps assured her he was as eager as she was to give British citizens back their rights and freedoms, but added, “I don’t want you to have them in a way that kills other people.”

“We will largely have our civil liberties back by May, hopefully, and, actually, by June, entirely. So, I think we are absolutely delivering on it,” he said.

Shapps was appearing on the show to defend the UK’s Test and Trace programme, after a recent parliamentary report exposed its inefficiencies and its undue reliance on contractors, and to discuss the government’s plans to invest in public-transport links.