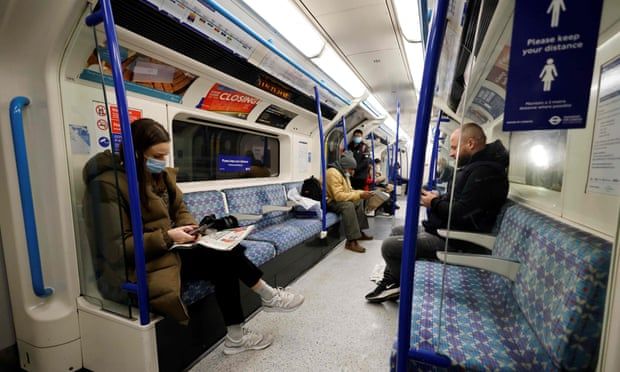 Sadiq Khan is seeking new investment from Whitehall after collapse in passenger numbers due to Covid
London’s transport authority could declare bankruptcy in a matter of days if the government fails to provide continued financial support.

Transport for London (TfL) saw its income severely reduced during the Covid-19 pandemic because of the sudden lack of passengers travelling on the network.

The government bolstered the public body, which relies on fare revenue to fund its operations, with a series of short-term funding deals. However, the latest ran out at midnight on Friday, and an extension is yet to be agreed.

It is understood that the mayor of London, Sadiq Khan, remained locked in negotiations through most of Saturday to secure a new deal.

“It’s vital that the government provides TfL with the long-term funding deal it needs to properly maintain vital transport services in the capital,” a spokesperson for the mayor said.

“Some 43,000 jobs outside London depend on TfL’s investment. If the government refuses to deliver the funding TfL needs, it could impact TfL’s UK-wide supply chain, hitting jobs and growth and holding back the economic recovery in London and across the UK.”

The spokesperson added that without a clear indication of government support “in a matter of days”, TfL with not be able to fulfil its legal requirement to offer certainty as to whether it can balance its budget.

One of the options network bosses will have to consider includes issuing a report under section 114 of the Local Government Finance Act 1988, which would in effect declare TfL bankrupt.

On Saturday, a TfL spokesperson said: “There is no UK recovery from the pandemic without a London recovery and there is no London recovery without a properly funded transport network in the capital. We hope these discussions can be concluded successfully soon.”

A TfL statement released earlier this month suggested that the network could enter a period of “managed decline” over the coming years if the government continued to refuse to offer long-term funding.

However, the government said it was the mayor’s job to reduce costs across the network to provide financial stability.

A spokesperson for the Department for Transport said: “We have repeatedly shown our commitment to supporting London’s transport network throughout the pandemic, providing over £4.5bn in emergency funding to Transport for London and pledging a further billion pounds of capital investment every year up until at least 2024/25 – all at a time of significant pressure on the national finances.

“We’re aware that TfL are still feeling the aftereffects of the pandemic, but it is the mayor’s responsibility to accelerate overdue reforms that will ensure TfL becomes financially sustainable in a way that is fair to taxpayers.”