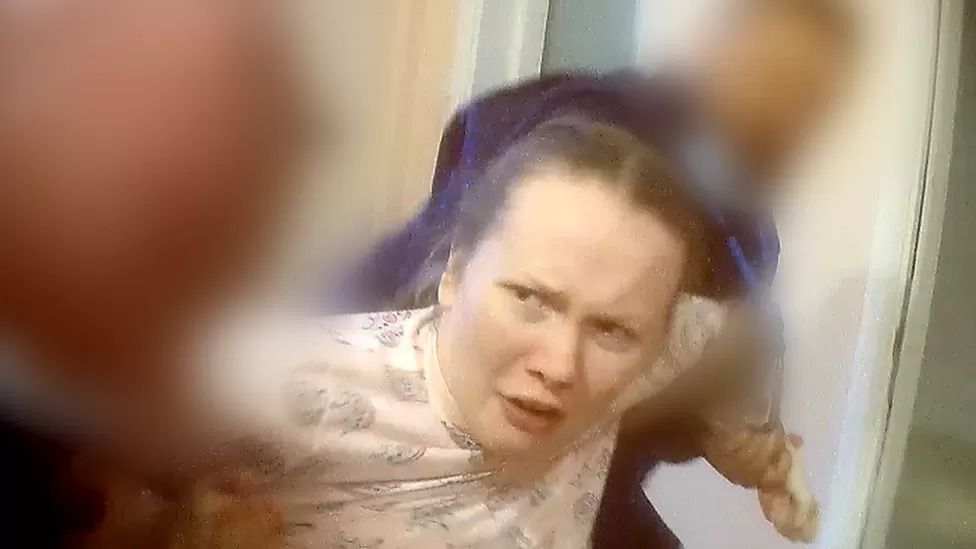 Humiliated, abused and isolated for weeks - patients were put at risk due to a "toxic culture" at one of the UK's biggest mental health hospitals, BBC Panorama can reveal.

Staff swore at patients and were seen slapping or pinching them on occasion.

A number of staff members have been suspended, and the trust said it was working with Greater Manchester Police, the independent healthcare regulator the Care Quality Commission, and NHS England "to ensure the safety of these services".

Greater Manchester Police said it has opened a criminal investigation.

The BBC's undercover reporter, Alan Haslam, spent three months as a support worker inside the Edenfield Centre in Prestwich, near Manchester.

With capacity for more than 150 patients, it is intended to care for people held under the Mental Health Act who are at serious risk of harming themselves or others, including some patients from the criminal justice system.

Whistleblowers had made allegations about poor staff behaviour and patient safety at the hospital.

*  Staff swearing at patients, taunting and mocking them in vulnerable situations - such as when they were undressing - and joking about their self-harm


*  Some female staff acting in a sexualised way towards male patients


*  10 patients being held in small seclusion rooms - designed for short-term isolation to prevent immediate harm - for days, weeks or even months, with only brief breaks

Prof John Baker, an expert in mental health nursing at the University of Leeds, said: "It doesn't feel safe. You're quite clearly seeing toxic staff. There's an awful lot of hostility towards patients across all of the wards, which is really concerning."

Warning: This story contains repeated use of highly offensive language

Claire - not her real name - has a history of self-harm and was filmed being humiliated by a female support worker for needing help with going to the toilet.

The staff member complained to her face about "having to look at your arsehole where biohazard fucking waste comes out".

In a sign that boundaries between patients and staff had broken down, on another occasion Claire sat on the lap of the same support worker, who said: "If you fart I will actually kill you." The support worker then pulled aside the patient's clothing and repeatedly slapped her bare skin.

A senior nurse was among those who watched, laughed and jeered as Claire was slapped. Most of the time nurses are in charge of the wards.

One nurse was filmed refusing to check on a crying patient named Olivia, who self-harms and has repeatedly tried to kill herself. The BBC is only identifying patients where they and their families have given consent.

Staff members laughed and joked that Olivia was "only crying" and "if she slit her throat you'd know it" because "she'd tell everybody about it".

When talking to patients about their bodies, staff used demeaning language, often passing it off as a joke. But patients told the undercover reporter they felt bullied and dehumanised.

Olivia said staff had called her a "fat cunt", before claiming they had been joking. The 22-year-old's mother said Olivia had in the past stopped eating and drinking because she believed she was overweight. "It's not funny, it's not a joke," Olivia said.

Another time, when Claire was due for a weekly injection, she hid her head under a blanket. Support workers and the senior nurse with them did not try to persuade her to comply, but instead were filmed dragging her by the wrist from a chair and into a room down the corridor.

One of the support workers mocked Claire again as staff held her down on a bed and exposed her body for the needle, saying "as if we'd choose to see your arse" and calling her a "cheeky bitch" as she protested.

After giving the injection, the staff locked Claire in the room, telling her they would keep her there for an hour as they laughed at her through the glass in the door - before letting her out a few moments later.

Dr Van Velsen said the members of staff acted "like a gang, not a group of health care professionals". "It's against any policy I've ever seen about restraint in doing this," she said.

The code of practice for mental health workers says restraint and other "restrictive interventions" should only be used to take control of dangerous situations and stop anyone being hurt - not for punishment.

But the BBC filmed one patient being restrained after hospital managers said she had been shouting and verbally abusive.

Harley, a 23-year-old autistic woman who was at Edenfield due to self-harm, was sitting on the floor when at least eight members of staff picked her up and dragged her away, screaming.

Harley was being restrained to take her back into seclusion, where she had already spent more than two weeks.

At one point a nurse was filmed saying staff wanted her kept in seclusion because they "need a break from her".

Reviewing footage of the incident, Dr Van Velsen said: "You cannot deprive somebody of their liberties because staff are fed up of her." 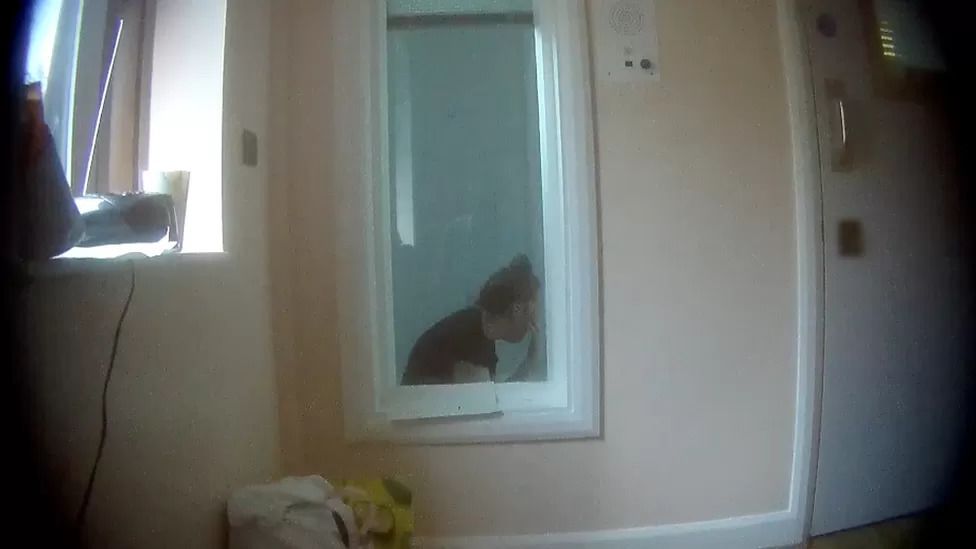 Some patients were held in tiny, empty seclusion rooms for weeks at a time

Patients are only supposed to be confined to one room and isolated from others for short periods when there is an "immediate necessity" because they are likely to harm other people. It should not be used as a punishment or threat, or because of staff shortages, guidelines say.

Staff told the BBC's undercover reporter that Alice (not her real name), a patient who had attacked staff, had been in seclusion for more than a year.

Guidelines for psychiatric hospitals say they can keep patients segregated for long periods to protect others on the wards. But the hospital must have the approval of a team of experts, consult the patient's family where possible and give the patient additional space, including access to an outside area.

Edenfield's seclusion rooms are small, with a bed, shower and toilet, all of which can be observed by staff from an adjoining room. Some have mould, peeling paint, a smell of sewage and windows that don't open.

During one 30-minute break from seclusion, Alice asked for her blanket and teddy bears, comforts which she had been allowed before her isolation began. A support worker refused, saying: "You're lucky you've not got a straw fucking bed in there. I'd give you a straw bed like cows have to sleep on."

On another occasion, staff were filmed trying to give Alice her anti-psychotic medication Clozapine twice, because of an apparent breakdown in communication.

Asked what would happen if she had too much of the drug, a nurse said: "She'd probably just die."

While the majority of patients filmed being mistreated by staff were women who had been sectioned and had self-harmed, some patients held in Edenfield have been convicted of violent crimes.

Experts said staff showed a worrying lack of boundaries even with these patients.

One patient, a man serving a life sentence for murder, was filmed writhing on the floor and on a bed as a female support worker grappled with him and tickled him.

Afterwards, she said: "You get away with murder here, don't we? Can you imagine if I got caught by bosses?" 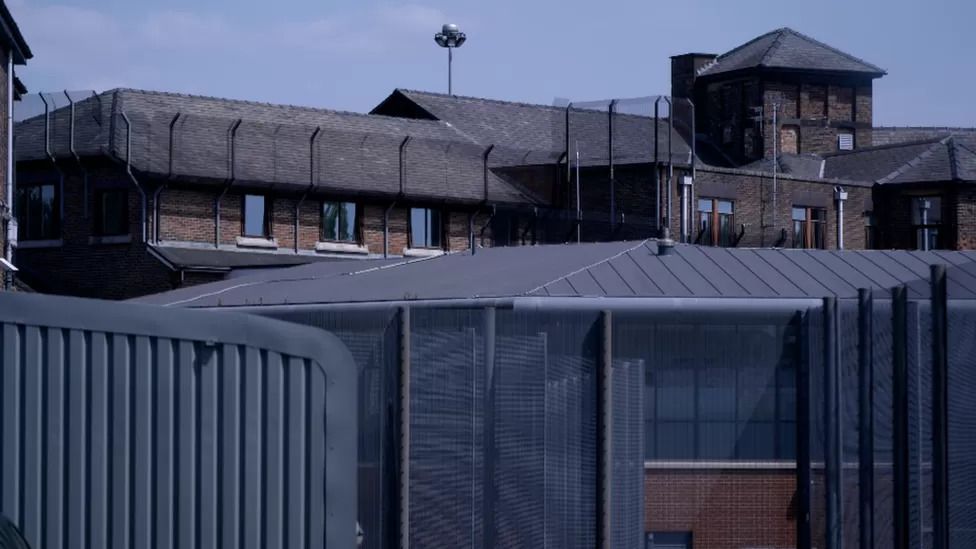 A different female support worker was filmed dancing up against another male patient.

"As well as making herself vulnerable she's also increasing the vulnerability of the patients," Dr Van Velsen said. "The one thing you should not do with patients is have a kind of sexualised relationship with them."

Vulnerable female patients were also seen being mistreated by male staff. A male support worker taunted a woman with a history of self-harm as she undressed, saying he would turn his back because "I don't want to be mentally scarred again".

The support worker was also filmed pinching her twice, the second time while bending her arm backwards.

"It's an assault," said Dr Van Velsen when she viewed the footage.

Among the staff's most important duties are patient observations, or "obs". These are checks to ensure patients are safe, made every 15 minutes - or more frequently for patients at higher risk.

Records of the observations affect decisions about care and can show that patients were being properly looked after, in the event that they hurt themselves or anyone else.

Observations were frequently missed or carried out poorly. A nurse was filmed telling a support worker to falsify the records. "Here, sign some of these things, say you've done them," he said.

He also asked the reporter to join in the falsification. "Want to pretend you were doing obs?" he asked. 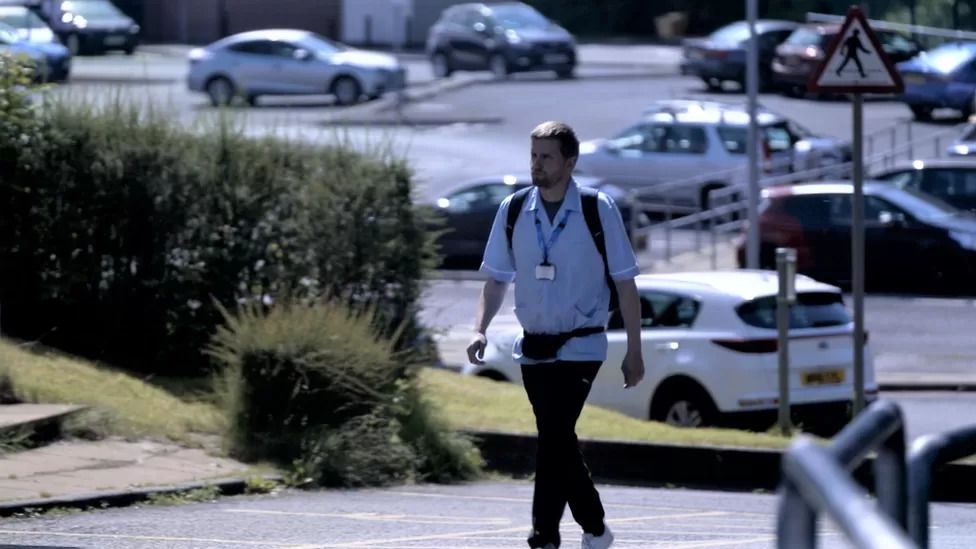 Hospital employees complained of understaffing and burnout. Sometimes support workers were left on their own, with no nurse on the ward.

There was a shortage of nurses for adult secure wards on 58 occasions during one five-week period, according to records from the trust which runs Edenfield, seen by Panorama.

Prof Baker said there should never be a shift without a registered nurse on the ward, but added that recruitment problems in mental health care were "no excuse for the abuse we've been seeing in the footage".

Seven members of staff were seen sleeping on shift by the BBC's undercover reporter. One nurse went to sleep outside in the sun for about an hour while on duty, in full view of other staff and patients.

The BBC has reported the findings of its undercover investigation to hospital management and the Care Quality Commission.

Greater Manchester Mental Health Foundation Trust said senior doctors have undertaken clinical reviews of the patients affected and it had also commissioned an independent clinical review of services at the Edenfield Centre.

"We owe it to our patients, their families and carers, the public and our staff that these allegations are fully investigated to ensure we provide the best care, every day, for all the communities we serve," the trust said.

The Care Quality Commission, which had previously rated the Edenfield centre as "good", says that rating is "currently suspended" and it is "reviewing the information" provided by Panorama.