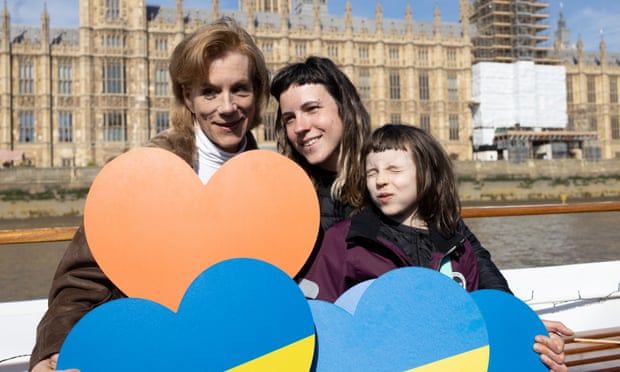 Only handful of rebels vote against government to support Lords amendments

The actor Juliet Stevenson has made an 11th-hour plea to Conservative MPs voting on the government’s controversial immigration bill on Wednesday to “be brave and vote with your heart, not with your party membership card”.

Stevenson has urged MPs who are backing the nationality and borders bill to instead back Lords amendments in support of refugees.

Mariam Kemple Hardy, head of campaigns at Refugee Action, said: “These plans will heap further misery on refugees and will do nothing to stop Channel crossings or break up people-smuggling gangs.

“We need a refugee system that provides protection, not punishment. That means creating more routes for people to reach safety in the UK and an effective and fast asylum system built on compassion and justice.”

Earlier on Wednesday, Stevenson was one of a group of celebrities and refugees who boarded a boat on the Thames decorated with blue and yellow bunting in solidarity with Ukraine, orange hearts in support of refugees and a large blue and yellow banner saying: “Vote to protect not punish refugees.”

Refugees from Ukraine and other conflict zones were joined by celebrities including Stevenson, Robert Rinder, the model Lily Cole, author Kathy Lette and comedian Deborah Frances-White.

The boat sailed around a stretch of the Thames that is overlooked by the Houses of Parliament in the hope of catching the eye of MPs and persuading them to not support the bill.

Stevenson, who is hosting a Ukrainian refugee named Dartsa and her six-year-old daughter, Orysia, both of whom joined her onboard, is a longstanding advocate for refugee rights. 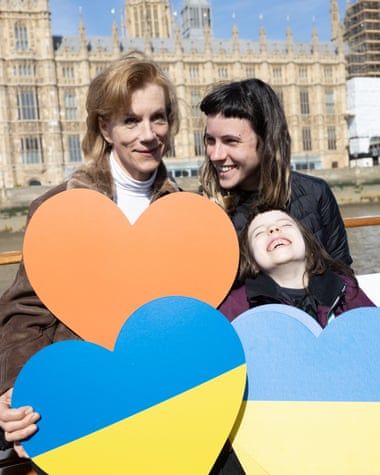 The boat sailed around a stretch of the Thames overlooked by the Houses of Parliament.

She said that while government was on a “downward trajectory” in terms of attitudes to refugees, the public was clearly headed in the opposite direction.

“The nationality and borders bill is the most brutal piece of legislation to have ever gone through parliament,” she said.

Stevenson, Dartsa and Orysia say the two families are getting along well and have bonded with the family dog, Millie. Stevenson said doing something practical like hosting was helping with “processing the horror” of what was happening in Ukraine.

Dartsa said: “It was a great relief to come to the UK with my little girl and know that we are safe from the terrible war in our country. Of course, it is not easy and I worry all the time for all those back home. But my family back there and I are so grateful to Juliet and her family for opening their door to us. I can only hope that nobody has to experience what we are now, but this welcome is a huge comfort at such an awful time.”

Rinder, whose grandfather was a Holocaust survivor, said that protecting and welcoming refugees was “an absolutely fundamental part of British values”.

“We need to have a humane, sensible and fair policy towards refugees,” he said.

Wednesday’s event was organised by Together With Refugees, a coalition of more than 400 organisations across the country, who support refugees fleeing war and persecution. The coalition is calling for a better approach to supporting refugees that allows people to seek safety in the UK, no matter how they came here and ensures people can live in dignity while they wait to find out if they will be granted asylum.

Together With Refugees had called on MPs to vote to accept amendments to the bill, including scrapping the proposal to punish refugees who arrive in the UK on a boat across the Channel or in the back of a lorry.

MPs are also being urged to agree that the government must publish an annual target for the number of refugees it will resettle in the UK. Campaigners would want this target to be at least 10,000 refugees from around the world each year.