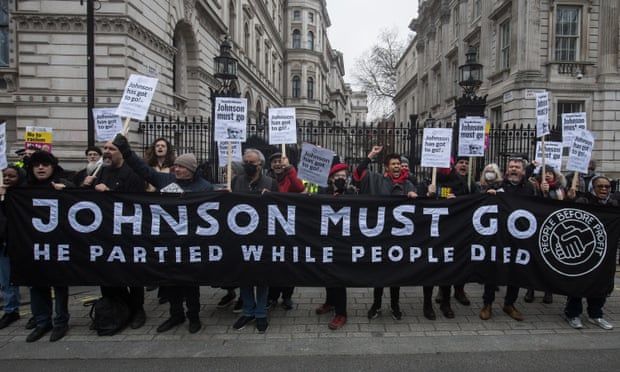 John Griffin, one of the party’s biggest backers, joins growing calls for PM to quit role and seek fresh mandate
One of the Conservatives’ most generous donors has called on Boris Johnson to resign and stand again for the Tory party nomination amid growing calls from its backers for a change of leadership.

John Griffin, the taxi firm tycoon who has given £4m to the Tories since 2013, has become at least the fifth donor to publicly raise concerns over the Downing Street parties scandal.

It comes as anger continues to simmer against the prime minister and his administration for repeatedly breaking Covid rules to hold parties in Downing Street while the rest of the country was in lockdown. A survey of grassroots Conservative supporters found that 40% said he should resign.

Griffin, the founder of Addison Lee, said Johnson should allow the party and voters to judge whether he is fit for office. “It is a shame. The whole situation has become comical. Boris has blotted his copybook and now needs to start again.

“I would like to see him resign and re-present himself to the party and, if he gets the nomination, to the nation. We need a fresh start, otherwise this will go on for ever,” he said.

Griffin’s comments follow statements from three backers this weekend who questioned Johnson’s role as leader. Peter Hargreaves, the Brexit-backing billionaire who gave £1m to the Tories for the 2019 general elections campaign, said he was “very reluctant” to continue supporting the party financially.

“He doesn’t want to do good – he just wants to be prime minister. That’s his only agenda. He changed from a remainer to Brexit specifically because it would give him a chance to be prime minister … As the Conservatives look now, I would be very reluctant to support them financially,” he said.

Hargreaves was one of three donors who voiced concerns to the Sunday Times. Lord Michael Spencer, founder of the Nex Group, formerly Icap, financial interdealer brokers, said: “I can’t see how Boris can last, I really can’t. He just hasn’t changed and he won’t change.” The restaurateur Richard Caring, who gave more than £200,000 to the Conservatives in 2019, told the newspaper: “He seems to have a death wish right now.”

John Caudwell, the Phones4U tycoon who gave the party £500,000 ahead of the 2019 general election, called for Johnson to clean up his administration or step aside. He told BBC News last week: “It’s the perceived arrogance, hypocrisy and rule-breaking that is impossible to justify.

“While the rest of us were striving to follow the ever changing rules – including myself, even when I deemed them to be excessive at best, nonsensical at worst – those who were setting those rules were, apparently freely and frequently, disregarding them,” he said.

The latest figures from the Electoral Commission show that the Tories received £3.7m in donations in the third quarter of 2021, double the amount received by the Labour party over the same period.

Other donors told the Guardian that they would make no fresh donations until Johnson had gone. One, who has given more than £100,000 since Johnson became party leader in 2019, said: “He has no morals. You need morals in the middle of an international pandemic.”

One former party treasurer said they did not think the current problems faced by Johnson would result in a funding crisis for the party. “There’s always worries about where donations are coming from, but the main problem is raising money for an election, which is still probably a year to two years off.

“But I don’t see this as being a run on the party’s financing. This is a midterm crisis, like all governments have, and I don’t think it’s panic time yet. Boris has this great power of recovery,” he said.
#Boris Johnson  #Johnson  #Covid
Add Comment