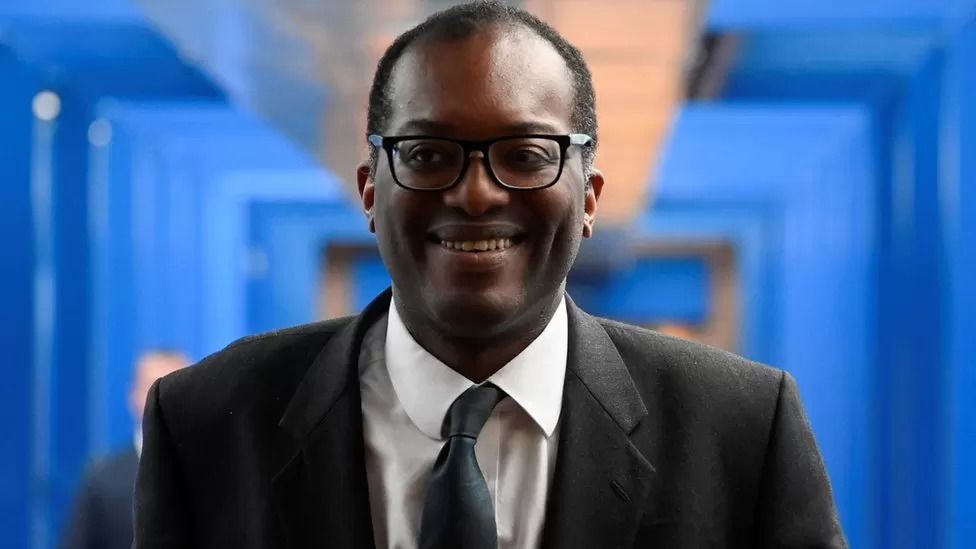 Kwasi Kwarteng will use his Conservative conference speech to insist the government will "stay the course" on his tax-cutting growth plan.

The chancellor's approach has sparked market turmoil and disquiet among some Conservative MPs, but he will argue his plan is "the right one".

He will warn that, without action, the country is heading for "slow decline".

Mr Kwarteng is under pressure after a backlash against his mini-budget, unveiled on 23 September.

Polling expert Sir John Curtice says the mini-budget may have done permanent damage to the Conservative Party's reputation for economic competence and may well cost the party the next general election.

But Mr Kwarteng and Prime Minister Liz Truss have doubled down on their claim that their plan is the only way to rescue the UK from economic decline.

Ms Truss told the BBC's Laura Kuenssberg she should have "laid the ground better" for the tax changes and government borrowing that will fund them.

But she stood by the decision to "act quickly" and promised to win over the "hearts and minds" of MPs in her own party who opposed the measures.

Former cabinet minister Michael Gove told Laura Kuenssberg that cutting the top rate of income tax "at a time when people are suffering" was wrong and that using borrowed money to fund tax cuts was "not Conservative".

Grant Shapps, another former minister who supported Rishi Sunak in the Tory leadership contest, told the BBC's political editor Chris Mason the 45% top rate cut would be rejected by MPs when they vote on it in the spring and she should do a U-turn now.

But in his first speech to a Conservative conference as chancellor, Mr Kwarteng will defend the changes.

"We must face up to the facts that for too long our economy has not grown enough," he will tell the audience in Birmingham.

"I refuse to accept that it is somehow Britain's destiny to fall into middle income status… or that the tax burden reaching a 70-year-high is somehow inevitable.

He will argue he has a "new approach" focused on raising economic growth, which would create "higher wages, more jobs and crucially, revenue to fund our precious public services".

In a response to criticism that the government's tax and spend plans do not add up, he will say that his measures will be "backed by an iron-clad commitment to fiscal discipline".

"We will show that our plan is sound, credible and will increase growth."

He will also reiterate his aim for the UK to hit 2.5% annual growth, saying: "We did it before. We can do it again."

Last week figures from the Office for National Statistics found that the UK's economy grew by 0.2% between April and June.

The government predicts its two-year scheme to freeze energy prices would cost £60bn in the first six months.

Concern about how the package would be paid for was heightened by the Treasury's failure to publish an assessment by the independent spending watchdog the Office for Budget Responsibility (OBR) - and by Mr Kwarteng's suggestion that more tax cuts could come.

In the days following the chancellor's announcement, the cost of government borrowing rose, forcing the Bank of England to make a £65bn intervention.

Mr Kwarteng is due to set out further details of his economic plan on 23 November, along with a forecast by the OBR.

Michael Gove: Cutting tax for the wealthiest "a display of the wrong values"