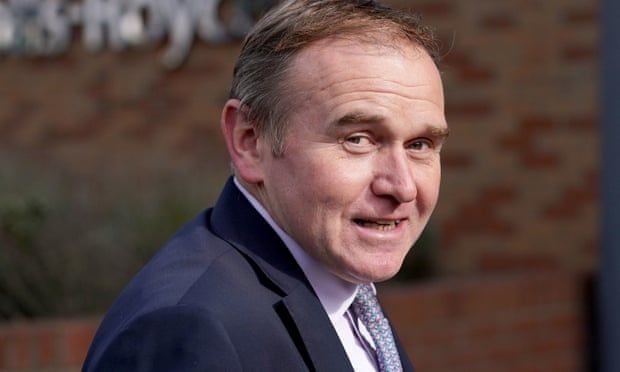 A cabinet minister has triggered a backlash from Conservative MPs by dismissing the Owen Paterson lobbying and vote debacle as a “storm in a teacup”.

The environment secretary, George Eustice, made the claim despite fury among his party’s MPs about being forced to vote for an ultimately doomed attempt to save Paterson from disciplinary action.

An Opinium poll for the Observer shows ratings for Boris Johnson and his party down significantly since last weekend.

Eustice spoke as Labour demanded the resignation of Jacob Rees-Mogg, the leader of the the Commons, over his handling of the matter, and Keir Starmer declared the prime minister incapable of cleaning up politics because he was “in the sewer with his troops”.

In an interview with Sky’s Trevor Phillips on Sunday, Eustice sought to make light of what happened last week, saying: “I think what we’ve seen is a sort of Westminster storm in a teacup, if I may say so.”

Eustice said the government made a “mistake” in ordering its MPs to vote for an amendment that combined shelving the proposed punishment for Paterson, a Tory former cabinet minister found to have broken the rules banning paid lobbying, with a plan to review the way the standards rules for MPs are enforced generally. But he claimed there was widespread support for introducing a new right of appeal into the system.

Robert Largan, the Conservative MP for High Peak in Derbyshire, said the minister was mistaken to try to minimise the scandal. “I think a prime minister showing loyalty to people is a good individual quality but in my view, I think they got this wrong,” Largan told Times Radio.

The backbencher, who missed the vote on Wednesday but said he would have voted to suspend Paterson if he had been there, added: “I don’t think it’s very helpful to say: ‘Oh, it’s just a storm in a teacup.’ In my view, this was something that they’ve got badly wrong and they need to fix it.” Largan also said that, having read the standards committee report, he thought it was “very clear” Paterson had broken the rules.

Tobias Ellwood, a Conservative former minister and chair of the Commons defence committee, also dismissed claims that No 10’s error was a trivial one, telling the BBC’s World at One that it had been “a dark week for British democracy”.

He said that, taking into account other factors such as the government’s willingness to disregard international law, there was a “pattern of behaviour” on display and Johnson needed to think about his legacy.

Ellwood, who also abstained in the vote on Wednesday, continued: “I think we have lost our way and we need to find our moral compass and get back to what the British people want us to do – good policy, good governance, leadership, statecraft. That’s what is needed at the moment rather than manipulating the system for our own survival.”

The Liberal Democrat leader, Ed Davey, was campaigning in Paterson’s former seat on Sunday. At a rally in Whitchurch, Davey said: “People in North Shropshire, including many lifelong Conservative voters, are sick of having their concerns ignored and being taken for granted.”

The Tories held the seat with a majority of almost 23,000 in 2019, with Labour second and the Lib Dems third.

Starmer claimed the episode was illustrative of Johnson’s approach to probity. The Labour leader told the BBC’s Andrew Marr: “Boris Johnson is the prime minister who is leading his troops through the sewer – he’s up to his neck in this.

“I don’t think you or anybody else could with a straight face say this prime minister is the man to clean up politics and to have the highest standards in public life because he is in the sewer with his troops.”

Starmer suggested Johnson wanted to weaken the Commons standards regime because he was worried his own conduct would be criticised again. He released a letter he sent on Saturday to the House of Lords appointments commission asking it to confirm that it would oppose any attempt by Johnson to offer Paterson a peerage – a move No 10 appeared to rule out the next day.

Labour also singled out Rees-Mogg for particular criticism. The shadow leader of the Commons, Thangam Debbonaire, said his position had become untenable because of the role he played in getting Conservative MPs to vote for a motion that would spare Paterson the proposed 30-day suspension .

In an interview with Sky’s Trevor Phillips on Sunday, Debbonaire said: “If I was him, I would be considering my position, and that’s what I think he should do today.” Asked whether she was saying Rees-Mogg should resign, Debbonaire replied: “I think his position is untenable, yes.”

Debbonaire said that despite the government U-turn on Thursday, Rees-Mogg had left the Commons “in a state of chaos”. She said the motion passed on Wednesday declining to back the standards committee report into Paterson still applied, and that the government should let MPs vote to rescind it before the Commons begins a short recess on Wednesday.