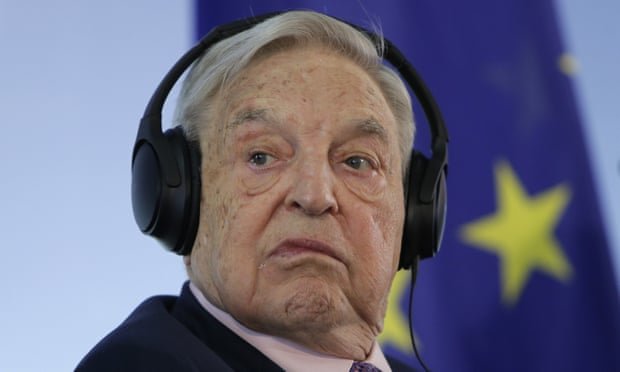 Labour calls for suspension of Sally-Ann Hart, Lee Anderson and Richard Short
The Conservatives are investigating three parliamentary candidates over antisemitism and are facing calls to suspend them before the election.

Sally-Ann Hart, standing in the Tory marginal seat of Hastings, shared a video with an image implying that the billionaire George Soros, who is Jewish, controls the EU, and she also liked a Nazi slogan on Facebook.

Lee Anderson, standing for the Conservatives in Labour-held Ashfield, is an active member of Ashfield Backs Boris, a Facebook group where Soros conspiracy theories have been promoted and which includes supporters of the far-right activist Tommy Robinson.

Richard Short, the candidate for St Helens South and Whiston, is being investigated for asking whether a Jewish journalist was more loyal to Israel than to Britain.

Labour has called for all three candidates to be suspended and is also demanding that Boris Johnson account for his 2004 novel Seventy-Two Virgins, which it claims contains antisemitic descriptions of a Jewish character.

Labour’s election coordinator, Andrew Gwynne, said: “As well as his own antisemitic comments, Johnson must answer for the antisemitism being promoted in his name. Boris Johnson said members who make racist comments are ‘out first bounce’. So why is he refusing to suspend these candidates?

“Johnson has never called out and condemned antisemitic Soros narratives among his supporters. Antisemitism is clearly rife in the Conservative party from top to bottom.”

In October, Jacob Rees-Mogg was condemned for calling Soros the “remoaner funder-in-chief”, which the Labour peer Alf Dubs said was straight from the antisemitism playbook. Lord Dubs has since retracted his comments, said there was no clear evidence of antisemitism and apologised to Rees-Mogg.

A Conservative party spokesperson said the cases of the three candidates were being investigated.

A statement from the party said: “Discrimination or abuse of any kind is wrong, and the Conservative party takes decisive action to deal with any incidents of hatred, abuse or intimidation. We are committed to stamping out the scourge of antisemitism in our society and supporting our Jewish community.

“Our complaints process is rightly a confidential one but there are a wide range of sanctions to challenge and change behaviour, including conditions to undertake training, periods of suspension and expulsion, and these are applied on a case-by-case basis.”

Hart, who is standing in the seat of the former Tory minister Amber Rudd, posted a link to a YouTube video in 2017 about the EU, which used Soros’s image. The businessman has been widely accused of pulling strings in the EU, which has previously been condemned as an antisemitic slur.

She then liked a comment left underneath the video that said “Ein Reich”, a Nazi slogan.

Hart has already caused controversy this election when it was revealed at a hustings that she had claimed some people with learning disabilities should be paid less than the minimum wage because they “don’t understand money”.

She said her comments had been taken out of context but she apologised for causing offence.

The Ashfield Backs Boris Facebook group, of which Anderson is an active member and which is moderated by local Tory activists connected to his campaign, has regularly posted Soros conspiracy theories.

Members of the group have written comments such as: “The entire exploiters of the anti-Brexit vote are now attempting to uproot the voters via pressure from Soros. What say you UK? Who is your master?”

Another wrote: “It’s scary how much Soros runs/owns/manipulates.”

A comment about the remain campaigner Gina Miller said: “Gina Singh needs to keep her Soros-backed nose out.”

Anderson has already courted controversy during the campaign for staging a fake election door-knock with a friend, which was exposed by the journalist Michael Crick, and for saying in a video that nuisance tenants should be sent to work camps.

He boasted about the video he made on 17 November, writing on the Facebook group that he would not house the tenants, whom he described as “idiots”, and it was “time to get tough”.

Celebrating the publicity he got for the video, he said of Labour supporters: “They are so daft. It’s gone from 2,000 views to 6,000 views in two hours because they are all sharing it. That’s brilliant publicity. Wait till Corbyn gives them free internet. I will be a megastar.”

Ashfield is a key target for the Tories, having been won by Labour last time by just 441 votes. Labour’s Gloria de Piero announced she was standing down as the constituency’s MP this year.

Short’s tweet from 2013 was directed at Melanie Phillips, who was appearing on the BBC’s Question Time. He wrote: “Being a bit zionist is her allegiance to UK or Israel.”

St Helens South and Whiston is a safe seat for Labour with a 24,000 majority.
Add Comment