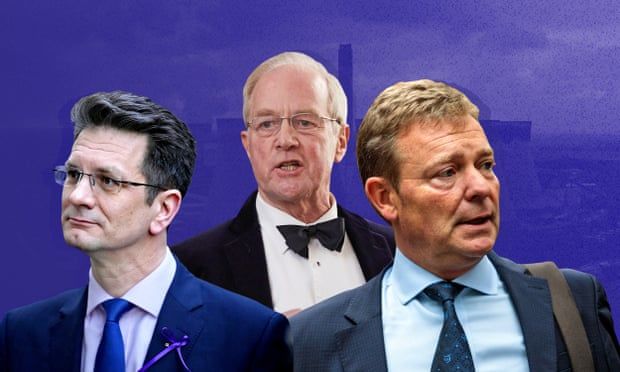 More than half of members of Net Zero Scrutiny Group were also in group that promoted Brexit vote, as fears grow for UK’s green agenda
A group of Conservative politicians and their allies are on the “frontline” of a new climate war and are attempting to derail the government’s green agenda, according to claims by leading climate scientists.

Tory MPs and peers in the Net Zero Scrutiny Group (NZSG) have gained widespread media coverage in the past month, attempting to link the government’s net zero agenda to the cost-of-living crisis and calling for cuts to green taxes and an increase of fossil fuel production.

Some members claim the government’s plans to reach net zero emissions by 2050 have been dreamed up by out-of-touch elites and would impoverish working people, “making them colder and poorer”. The 19 Conservatives confirmed to be in the group say they do not dispute climate science or the need to decarbonise.

Two leading members have links to an organisation, often described as “climate-sceptic”, that was founded by the long-term climate denier Nigel Lawson. The group’s chair, the MP Craig Mackinlay, has also been accused by a leading climate institute of using misleading and inaccurate information.

Michael Mann, one of the world’s leading authorities on the climate and author of The New Climate War, said the group appeared to be attempting to drag climate policies into a culture war, which he described as a “dangerous new tactic being used by those opposed to addressing the ecological emergency”.

“This is where the frontline of the battle is now, and yes, we do have to push back fiercely on this sort of pernicious disinformation,” he told the Guardian.

Baker is a trustee of the Global Warming Policy Foundation (GWPF), launched by Lord Lawson in 2009. The organisation – which recently rebranded its campaigning arm to Net Zero Watch – is characterised by its opponents as being one of Britain’s biggest sources of climate science denial, a claim it denies.

It and the NZSG of Conservative politicians have recently turned their attention to the costs of the government’s decarbonisation plans.

Lord Lilley and Baker were at the thinktank’s annual lecture at the end of November last year where the main speaker, the US scientist Prof Steven Koonin, who admits the climate is changing and humans are responsible, questioned the scientific consensus around the climate crisis.

He told the audience: “The first thing we can do is get authoritative bodies – the royal societies, the US national academies – to stand up and say there is no climate crisis. This is an issue, we can deal with it in due course, but let’s all relax.”

Leading climate scientists, shown a video of the event by the Guardian, suggested it had “cherrypicked data” and “distorted” the facts of climate science. They also questioned whether members of the UK’s ruling party might be getting their evidence about the climate crisis from such events.

In response, Koonin expressed disappointment at the criticisms, adding: “Viewers of my talk will see that my points are specific, relevant, and well-supported by references to the literature and data.”

Analysis by the Guardian also found that more than half of the members of the NZSG were members of the European Research Group (ERG), which successfully pushed for the Brexit referendum inside the Tory party. This has led to fears they could push for a similar culture war over net zero – and even a referendum. Nigel Farage, another veteran of the Brexit campaign, has said he is agitating for a referendum on net zero, and Baker says the anti-net-zero campaign will be bigger than Brexit.

A Tory MP told the Guardian he considered Baker to be “seeing this like Brexit: he sees net zero and the [global warming target of] 1.5C as an imposition from an unelected remote bureaucracy that must be defeated”.

Dr Benny Peiser, a longtime policy lead for GWPF and director of its net zero watch campaign, said it did not dispute the need to decarbonise, but he was pleased that Tory MPs were now willing to put their name to opposition to net zero.

He told the Guardian: “We are obviously delighted that MPs are beginning to recognise that there’s a problem. Now for the first time we have a proper debate about the pros and the cons of the different options.”

The GWPF did not respond to subsequent written questions from the Guardian.

A number of experts dismiss the NZSG’s claims around the cost of net zero, saying the costs are relatively small and diminishing, at less than 1% of GDP by 2050. They also point out the multiple benefits of moving rapidly away from fossil fuels, from cleaner air and water to well-paid green jobs and lower energy bills.

Mackinlay was accused of misinformation by the Grantham Institute at the London School of Economics. It suggested he had relied on “inaccurate and misleading claims, particularly about the investments required to achieve the statutory target of net zero emissions of greenhouse gases by 2050, in order to promote [the NZSG] cause”.

Some members of the group appear to have mocked climate policies or questioned the need for rapid action on reducing emissions. Scott Benton, the MP for Blackpool South, tweeted in November: “It’s Gender Day at #cop26 today. Apparently women and girls are more susceptible to climate change than others so the government’s naturally making £165 million available to address this apparent disparity. You really couldn’t make it up.”

Mark Jenkinson, the MP for Workington, has lobbied for more coalmines to be opened, calling those who opposed the Cumbria coalmine “climate alarmists” and saying: “Apocalypticism risks becoming the new UK religion.”

Lilley had an initial conversation with the Guardian but he and Baker did not respond to subsequent written questions about the article. Mackinlay confirmed his role as chair but declined to say more.

Three members of the NZSG did respond, stating they did not dispute climate science or the need to decarbonise, although they did object to the government’s current net zero plans. Jenkinson said he was confident it was possible to reach net zero “without making my constituents poorer”.

“I’m delighted that we’re having the adult discussions that so many outside the Conservative party are afraid of having, around the ongoing need for UK oil and gas for transition to net zero by 2050 and beyond it,” he added.

Halfon said: “Millions are now being hit desperately hard by the cost-of-living crisis with heating and fuel bills soaring. We cannot sacrifice any further their ability to cope on the altar of climate change.”

There is opposition to the group within the Conservative party. The MP Chris Skidmore, a former energy minister, has set up a new “net zero support group”, and a current environment minister told the Guardian that the NZSG was of “no concern to the government” and was being widely ignored.

The former Tory environment secretary Theresa Villiers also urged her party not to slip into a “culture war” over the climate crisis: “It should be dealt with in the context of a normal political debate, I hope we don’t start to see a culture war in this area.”

But as Boris Johnson – seen as a Tory standard-bearer for net zero – fights for his political life, attacks on the policy are continuing. After last week’s energy price hike, “senior cabinet ministers” were quoted on the front page of the Daily Telegraph urging the government to “rethink its net zero plans”.

James Murray, the editor of the website BusinessGreen and a leading environmental commentator, said: “Those within government and beyond that accept the net zero transition is the defining economic project of the age would be wise not to underestimate the threat. Opposition to climate action may be on the periphery. But as the past few years have taught us, ideas that were on the periphery can become very influential, very quickly.”
#Boris Johnson  #Nigel Farage  #Johnson
Add Comment