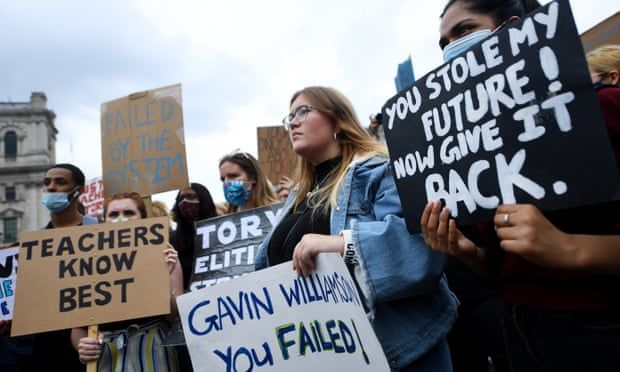 Talented students in UK missing out on the best courses as colleges clear last year’s deferrals and panic about being oversubscribed
With predicted A-level grades of A*, A*, A, and national awards for swimming, 17-year-old state-school student Eve Leleux could have expected a string of top university offers in an ordinary year. Instead, with elite universities panicking about being overloaded with high-grade students this summer, she has had no offers to study her chosen course of dentistry.

She is not alone. Teachers and parents across the country are reporting stories of distraught high-flying students who have waited months longer than usual to hear back from top-ranking universities, only to be rejected by all or most of them.

Teacher-assessed A-levels are widely expected to result in far more students netting top grades this August. During last year’s A-level fiasco, some prestigious universities ended up taking up to a third more students than in 2019, despite already being full, after thousands of students had their A-levels marked up. Many students chose to defer to this year, putting further strain on places for 2021.
Advertisement

Universities have to take everyone who meets their offer grades, so with accommodation and facilities already stretched, and social distancing restrictions likely, many elite institutions have made fewer offers than usual to protect themselves.

“My daughter is upset and angry,” said Eve’s mother, Rachel Jenner-Leleux. “She did her first work experience at a dentist when she was 14. She has wanted this for so long.”

Jenner-Leleux, who lives in Telford, obtained data on Liverpool University’s dentistry admissions through a freedom of information request after it turned her daughter down. Last year, the course made 142 offers for 2020 and deferred a further 152 for 2021. This year, it made only 43 offers and deferred 30. Dentistry numbers are capped by the government in England, although last summer they had to remove the cap because so many more students met the top grade requirements.

“As soon as they cancelled the exams last year, the writing was on the wall,” she said. “The government must have known this would happen. Gavin Williamson has done absolutely nothing to help any of these kids who have worked so hard.”

Mike Nicholson, director of undergraduate admissions at Bath University, said that with competitive institutions like his under “significant pressure”, these are not isolated stories. “I know from my conversations with schools that there are students with very good predicted grades who had received no offers, while students predicted three B grades got lots of offers back very quickly. Many high-flyers may be left with just one offer.”

Fintan Hogan, a pupil at King Edward VI Camp Hill, a state grammar school for boys in Birmingham, is predicted four A*s but was turned down by both his top choices, Cambridge University and the London School of Economics. He was braced for stiff competition at Cambridge but thought LSE was a “secure” second choice as his politics course required only three As. “I am really disappointed,” he says.

Hogan has since accepted an offer from King’s College London, but worries he may have missed out on some halls because he had to wait until this month to hear back from LSE.

“People describe us as the lucky year,” he said. “How can anyone suggest we’ve got it easy when we’ve had to learn independently for so long, knowing that at the end of it there would be fewer university places on offer because of all the deferrals last year?”

Corinna Gregory, whose son Oliver is school captain at King Edward VI Five Ways, another Birmingham grammar school, says he had “set his heart on” studying medicine at Newcastle University. Oliver, who is predicted A*, A*, A, had a Zoom interview before Christmas and was finally rejected in April.

“It was such a long time to wait and that was very difficult,” said Gregory. “What I find hard is that he has really put the passion in. He is so driven and wants to be a doctor to make a difference to people.”

Oliver did get one offer, and plans to study medicine at Southampton University next year, after working in a refugee camp in Botswana.

Dr Philip Purvis, deputy head at the independent Croydon High School, said: “Faced with constraints on space – at a time when space means everything – and near-certain grade inflation, some of the most respected universities in the UK have chosen to pull the shutters of communication down and make their offers very late in the admissions process.”

He said the odds have been toughest in medicine. “We are finding that talented and dedicated pupils are missing out on prized medical training when in any other year, their places would not be in doubt.”

Professor Ian Fussell, associate dean of education at the University of Exeter’s medical school, said they took 40 extra students last year, and “have capacity for extra students this year”, but only if there is new funding to support clinical placements.

Yet Sir Peter Lampl, founder of the Sutton Trust, warned it was “more important than ever” that universities took students’ circumstances into account. “The educational impacts of the pandemic have not been felt equally, with students from the poorest homes most likely to struggle, so those students need to be given a break.”

A Department for Education spokesperson said it recognised the challenges faced by pupils and universities, adding: “

Those who have not achieved their HE place can choose to enter Ucas’s clearing service, as applicants have in previous years. This will help match students to courses based on interest and availability if they are unplaced, or if they wish to change their firm choice.”
Add Comment