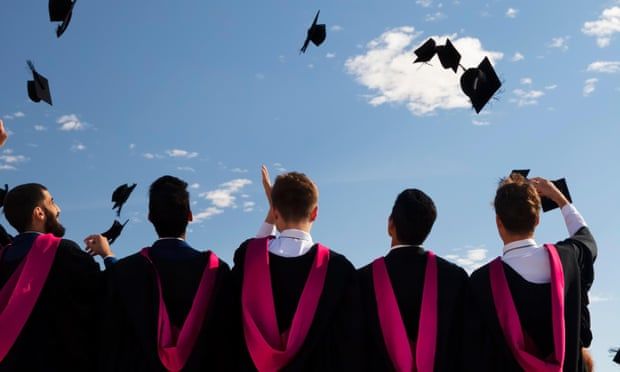 Too many first-class degrees awarded in England, regulator says

Minister calls for universities to restore pre-pandemic award levels by next year
Universities in England have been for rebuked for awarding “excessive” numbers of first-class degrees during the pandemic, with ministers and regulators accusing the sector of undermining its own reputation.

The Office for Students (OfS) published analysis claiming that more than half of first-class degrees awarded in 2021 could not be explained by “observable factors” such as prior results or social background of students.

Michelle Donelan, the universities minister for England, said universities should respond in the same way as A-level and GCSE exams and restore pre-pandemic award levels by next year.

The OfS said nearly 38% of undergraduates in England were awarded a first in 2020-21, more than double the 16% awarded firsts a decade earlier, and above the 29% awarded before the pandemic.

But the OfS’s analysis also looked at “unexplained” firsts, defined as awards that “cannot be statistically accounted for by changes in the characteristics of the graduating cohort” for each university.

The Royal Academy of Music was accused of awarding the highest proportion of “unexplained” firsts among the 80% of students awarded firsts last year. Among mainstream universities, Bradford had 41% of its firsts classed as unexplained by the OfS’s statisticians, while Queen Mary University London (QMUL) had 37% unexplained.

A spokesperson for QMUL said it was ranked by the Sutton Trust as top in the country for social mobility. “We are proud to open the doors of opportunity to anyone with the potential to succeed at a Russell Group university,” they said. “We are equally proud of our successful world-leading work in reducing the attainment gap between white and BAME students, which has resulted in our degree outcomes becoming a true reflection of our students’ abilities.”

Steve West, the vice-chancellor of UWE Bristol and president of the Universities UK group, said the OfS also “rightly” wanted students not to be limited in what grades they could achieve. “We believe the OfS must be careful not to assume that students with lower entry grades, typically from more disadvantaged backgrounds, cannot achieve first-class degrees,” West said.

Ofqual, England’s exam regulator, has also announced that students taking A-levels and GCSEs in the future will benefit from questions that are simpler and avoid references that could confuse and disadvantage candidates.

The regulator has been concerned that pupils may be unfairly hampered by a middle-class bias in the language used in questions, such as a 2017 GCSE maths paper that described a theatre where “each person had a seat in the circle or had a seat in the stalls”. Candidates were asked to calculate how many of the 2,600 seats were occupied, but pupils would need to understand that circle and stalls are in different sections to answer correctly.

In 2019, examiners for a GCSE German modern languages paper said some students struggled when asked to describe the advantages and disadvantages of a skiing holiday.

Jo Saxton, Ofqual’s chief regulator, said: “This isn’t about making exams and assessments easier but about breaking down the barriers that stop young people achieving their true potential and making sure that exams actually test the things they are designed to test.”

The new regulations include a commitment to clear and consistent layout, to aid candidates with special needs or disabilities.

A spokesperson for the Autism Education Trust said: “This is a positive step towards creating a more inclusive education system that recognises that adjustments must be made to support the needs of all autistic children and young people to reach their potential and receive a fair chance to demonstrate their skills and abilities.”
Add Comment