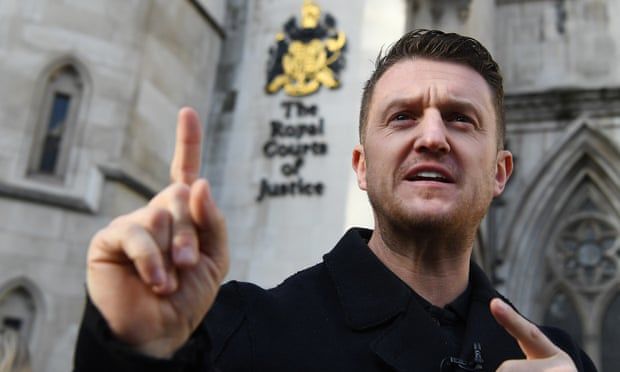 Tommy Robinson is potentially facing jail over possible contempt of court after failing to show up for a high court hearing where he was to be questioned about his finances after losing a libel case.

The former English Defence League leader had claimed he was bankrupt after losing a libel case brought against him by Jamal Hijazi, who had been filmed being attacked at school in 2018.

Robinson, whose real name is Stephen Yaxley-Lennon, was sued after falsely claiming in Facebook videos viewed by nearly 1 million people that Hijazi was “not innocent and he violently attacks young English girls in his school”.

Robinson was subsequently ordered to attend a hearing at the high court to be questioned by a lawyer for Hijazi – but failed to attend the hearing at 2pm on Tuesday.

Judge Dagnall said that there may well be a reason for why Robinson, 39, was not present, but added “that is for another day” and said he could only refer the matter to a high court judge to consider if there had been contempt.

“He knew perfectly well that this hearing was going to take place,” said Dagnall, adding that there had been a response from an email address that had been used to service notice to Robinson.

He recalled that at a previous hearing it had been understood that documents and orders would be served on Robinson by email after he had complained that those living at his home address could be subject to threats “in light of his political activities” if it were used to serve further documents and orders.

The judge added that he had to “dispense with a method of service” at Robinson’s own request, telling the hearing: “Therefore, anything that occurs with his email inbox is very much down to him.”

Robinson clearly knew about the hearing, Dagnall added, not least because of various attempts by lawyers for Hijazi to contact him, and in any case he had replied to say he had received other documents.

Ian Helme, for Hijazi, had previously told the court there was information “that what is stated in his bankruptcy application is not a full account of [Robinson’s] assets”.

On Tuesday, the barrister said lawyers had “tried various methods to bring this to Mr Lennon’s attention” including sending documents by post to multiple addresses – including one in Tenerife and his ex-wife’s home – and to different phone numbers via WhatsApp.

Helme also told the court that Robinson’s bankruptcy had now been discharged and so he would be personally liable for costs.

Dagnall – a Queen’s bench master – said “all I can do” is refer Robinson’s non-attendance to a high court judge.

“They may, if he or she chooses to do so, hold Mr Yaxley-Lennon in contempt,” he continued. “That is a matter for the high court judge.”

Nick Lowles, CEO of Hope Not Hate, said the case was not just about money, but about justice.

He added: “Tommy Robinson doesn’t care about the impact he had on the life of Jamal Hijazi and his family. He wants to continue to spread his vitriol and hate – and we are committed to stopping him.”

In January, the anti-facist campaign group said it believed Robinson had access to assets worth up to about £3m through property acquisitions, investments, donations and book sales.