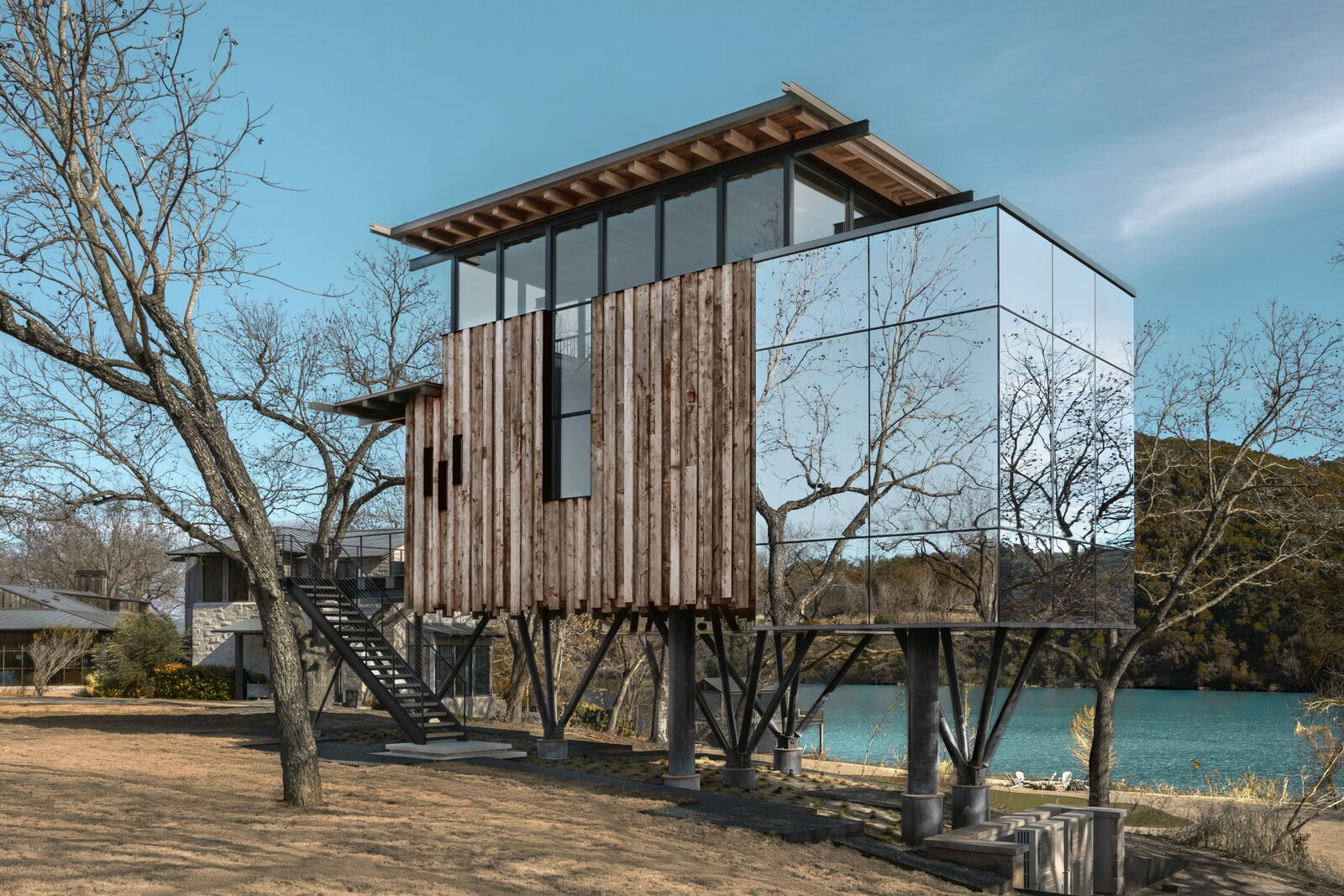 When one Austin family sought to create a tree house on their property, they looked to their own daughter’s artwork for design inspiration. The project started out as a backyard playhouse for the couple’s two daughters-but then it took off and went above and beyond everyone’s wildest dreams. 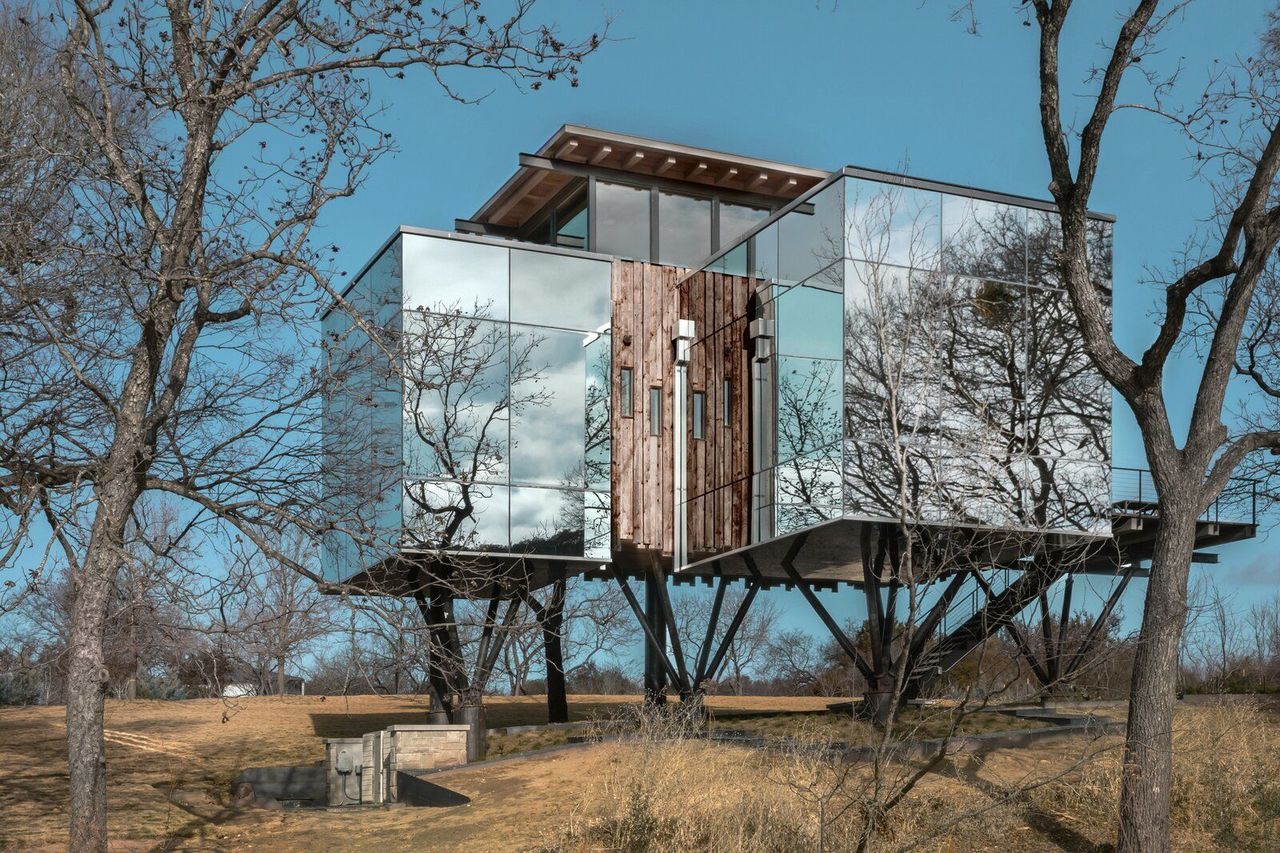 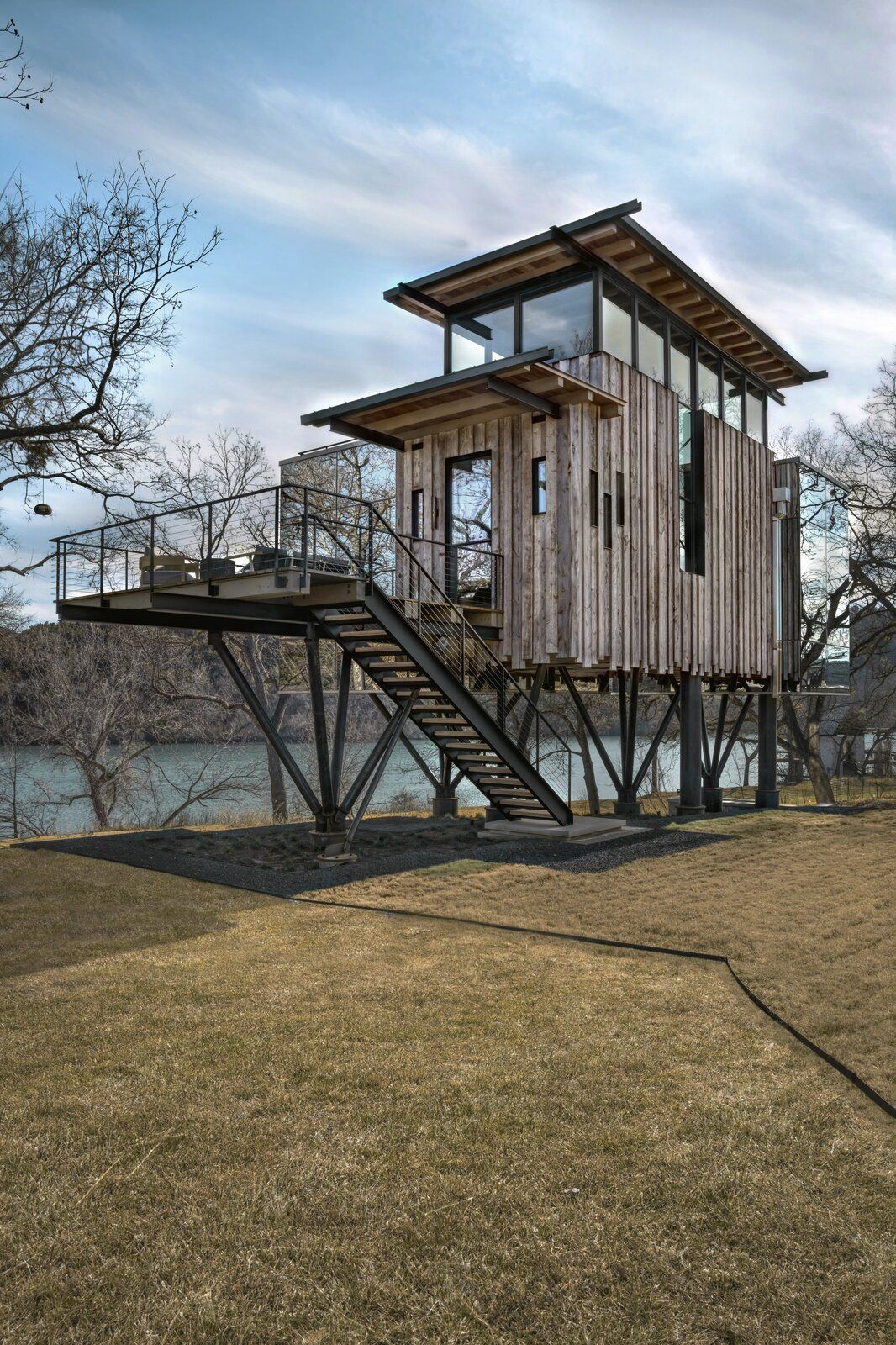 Set atop stilts designed to resemble tree branches, the tree house is clad in reclaimed Douglas fir and mirrored panels that reflect the surroundings.

The family had worked with Ryan Street Architects on their main house, so they enlisted the Austin firm to bring their young daughter’s sketch to life. "That sketch became one of the first key inspirations," says project manager Jeremy Ristau. "The design intent from that point forward was to create a fully elevated structure that would be nestled within the surrounding tree canopies and evoke the feeling of a tree house, while also being very refined, elegant, and fully functional for the owners as a guesthouse." 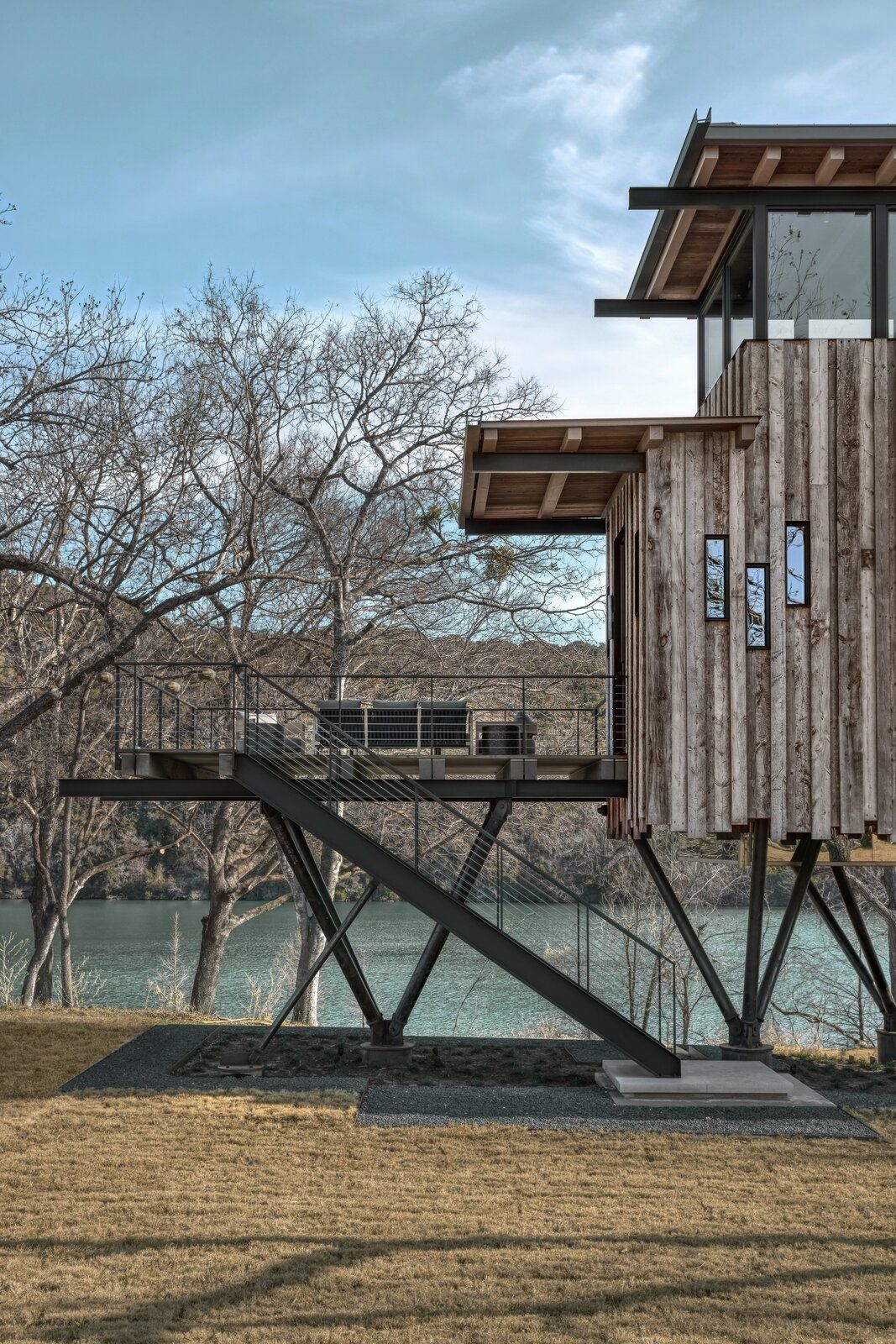 The reclaimed wood siding and timber beams mimic the owners’ main house on the adjacent property. "We wanted the tree house to feel special, while also keeping it relatable in color palette and materials to their main residence, since they are in close proximity and it will ultimately feel like one cohesive estate," explains project manager Jeremy Ristau. 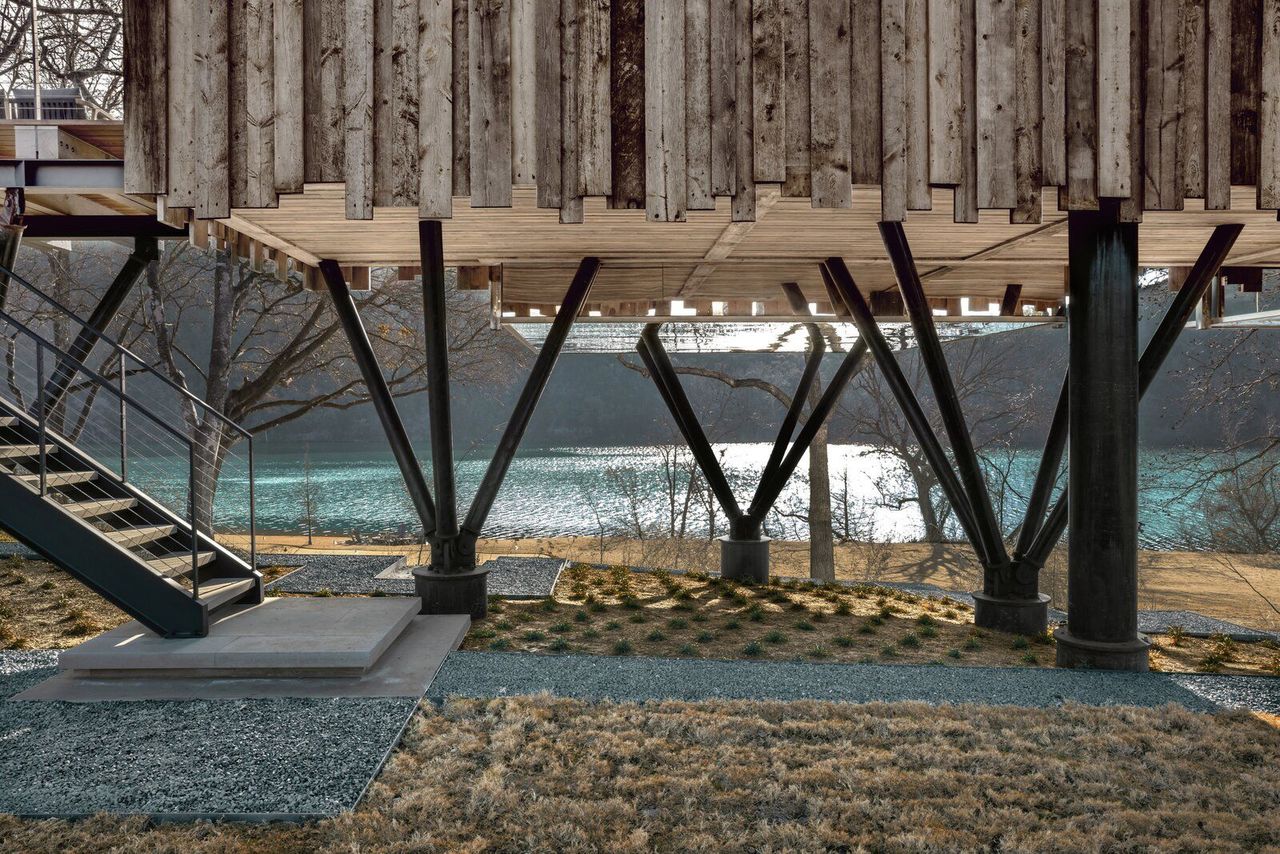 The stilts make the structure appear to float above the site.

To build the tree house, the firm turned to the Escobedo Group, a local construction company known for developing a panelized prefab system called Dario. The company constructs the panels off-site at a 60,000-square-foot, state-of-the-art facility in Buda, Texas, and then transports them directly to the job site. Once they arrive, they can be assembled in a matter of days instead of months.

The Tree house took a total of five days to construct, using a process that places minimal impact on the job site. "The massive steel base was put up in two days, and the tree house structure itself took three days," explains Dario creator David Escobedo. "Dario is a better, more efficient way to build. The system drastically reduces waste and prevents damage to native conditions." 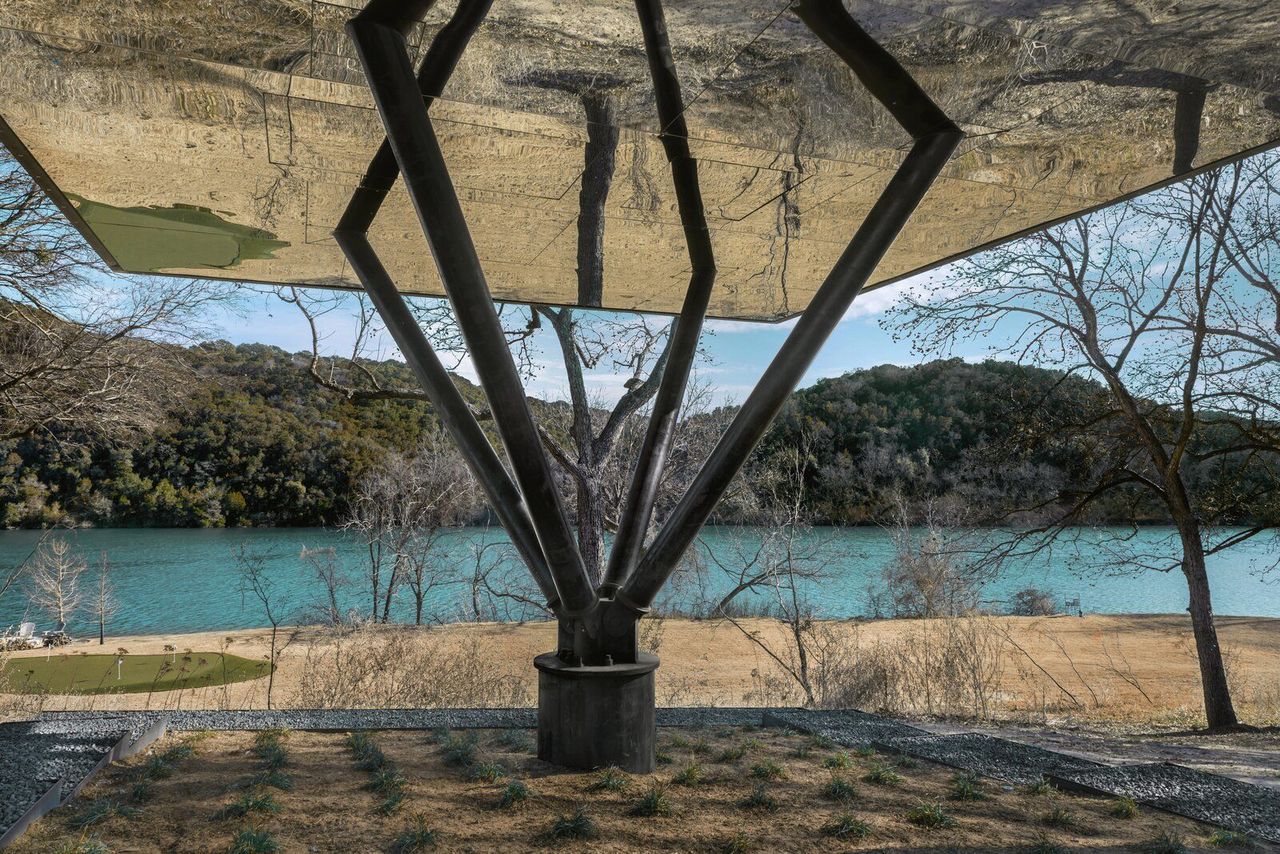 The steel supports also solve a major design challenge by providing the tree house with electricity and plumbing. 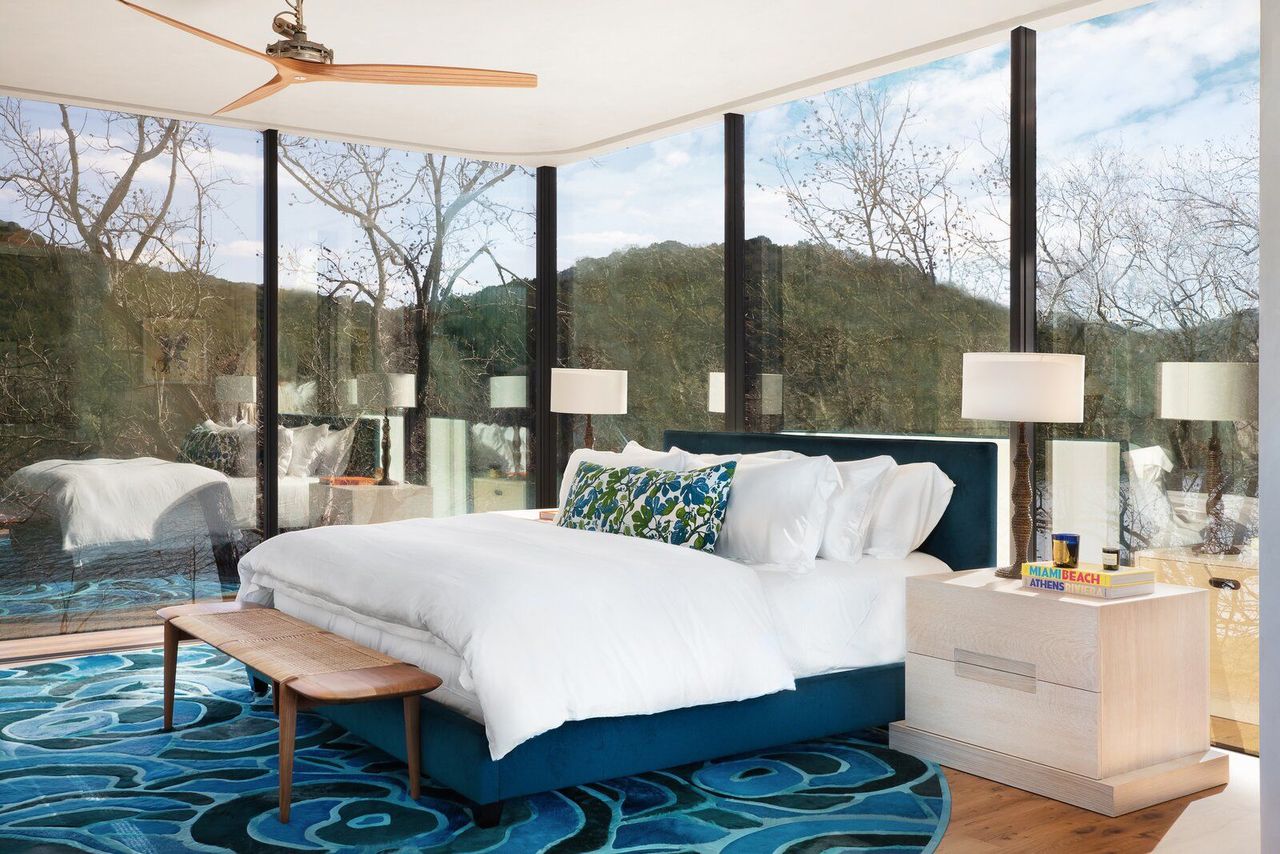 The bedroom and bathroom are set within large glass cubes that provide the sensation of floating amidst the tree canopy.

In a rapidly growing city like Austin, minimizing a project’s construction footprint is important. "Instead of five dumpsters on a job site, I would like to reduce it down to five garbage bags," Escobedo says. "The electrical and plumbing was already installed in the walls, so on-site it’s essentially plug and play."

The guesthouse is clad in Douglas fir and mirrored panels that reflect the stunning surroundings, and it’s set upon stilts that make it appear to float. "We developed a steel support system that mimics large tree trunks with steel pipe "branches" that span outward from the "trunks" to carry the tree house structure above," says Ristau. The steel supports also solve a major design challenge: how to provide the structure with electricity and plumbing. 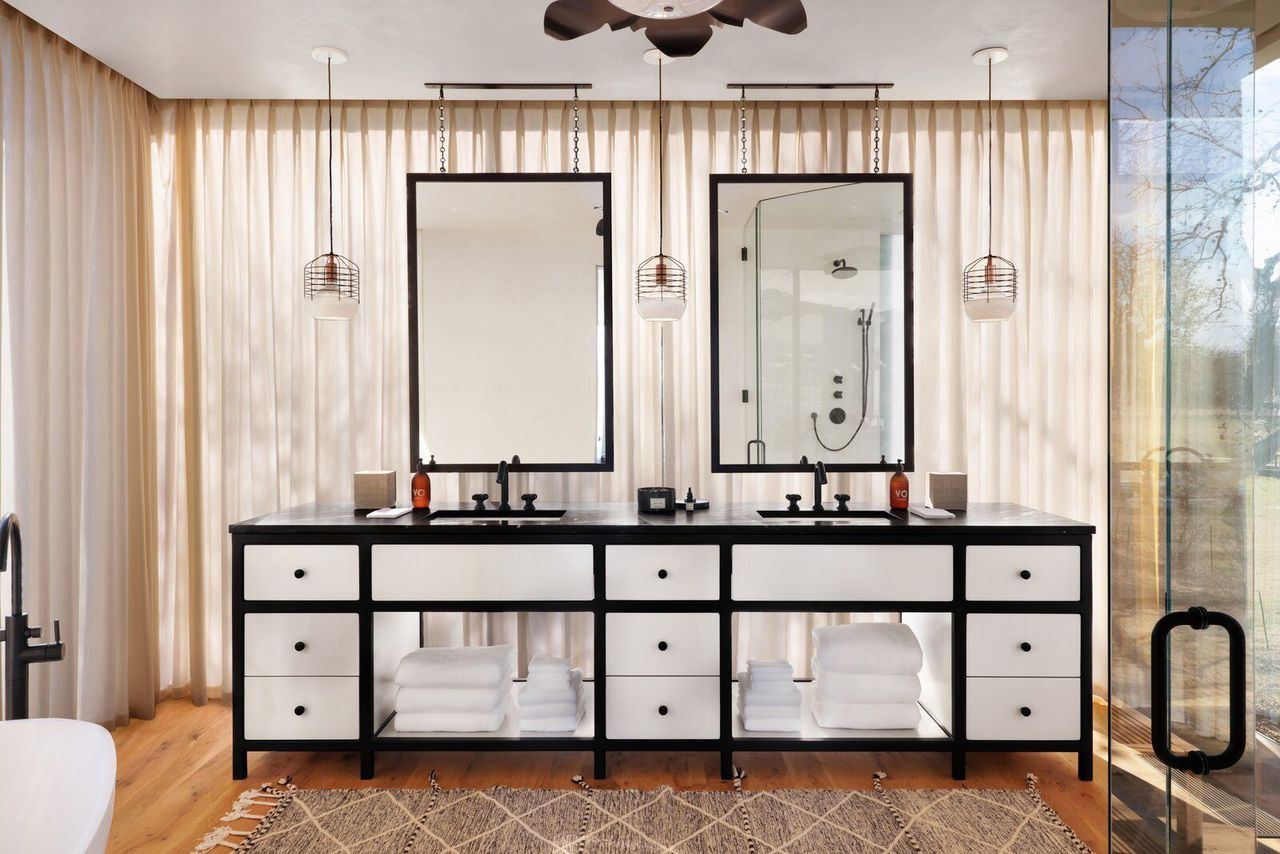 The mirrored glass exterior provides privacy during the daytime, while motorized drapes conceal the interior at night. The firm had to think outside the box and move elements that are traditionally located against walls out into the living spaces. 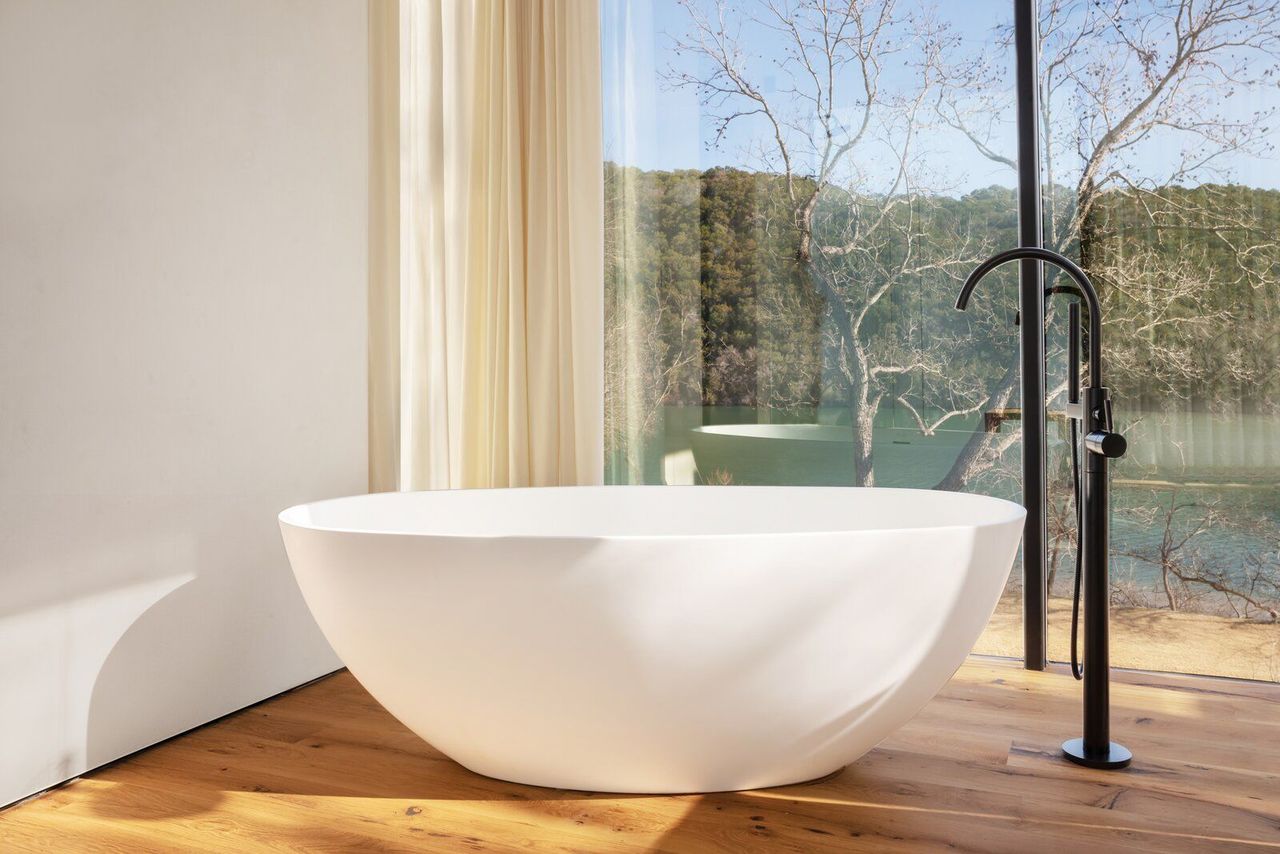 Another challenge was designing large, floor-to-ceiling glass cubes for the bedroom and bathroom. These areas feel like they’re floating amidst the tree canopy, yet they’re carefully designed to provide privacy as well-motorized drapes encompass the interior. "We suspended the vanity mirrors and TV from the ceiling, and we heavily frosted the interior pane of the glass wall adjacent to the shower, since we could not feasibly put drapes in there," explains Ristau. 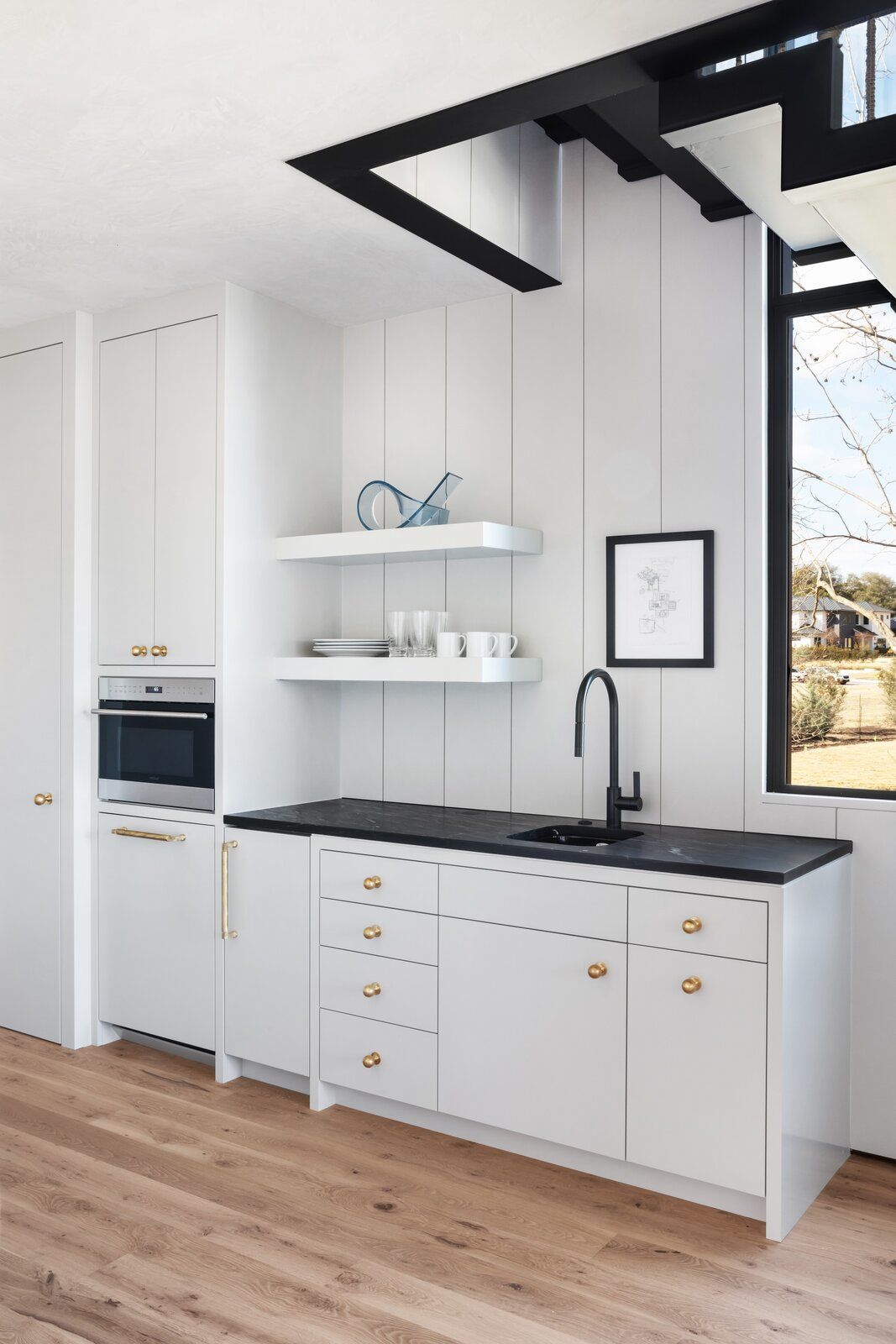 The original tree house sketch that provided inspiration for the guesthouse hangs above the kitchen sink. 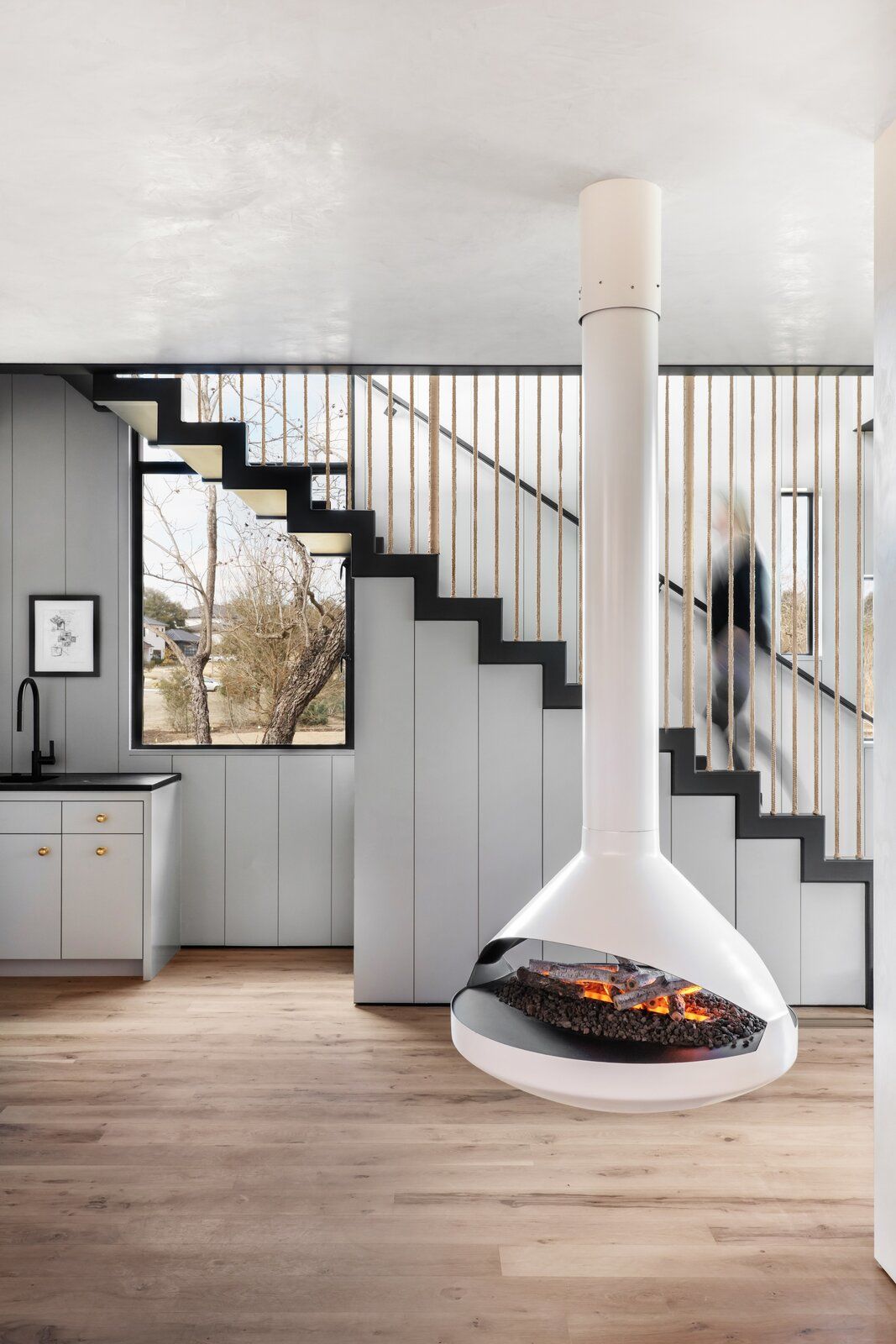 The results exceeded all expectations, and the tree house now serves as dreamy escape that everyone can enjoy. The girls have beds on the upper level, while a downstairs bedroom allows the structure to serve as a more formal guesthouse—and the sketch that inspired it all is framed above the kitchen sink for all to see. 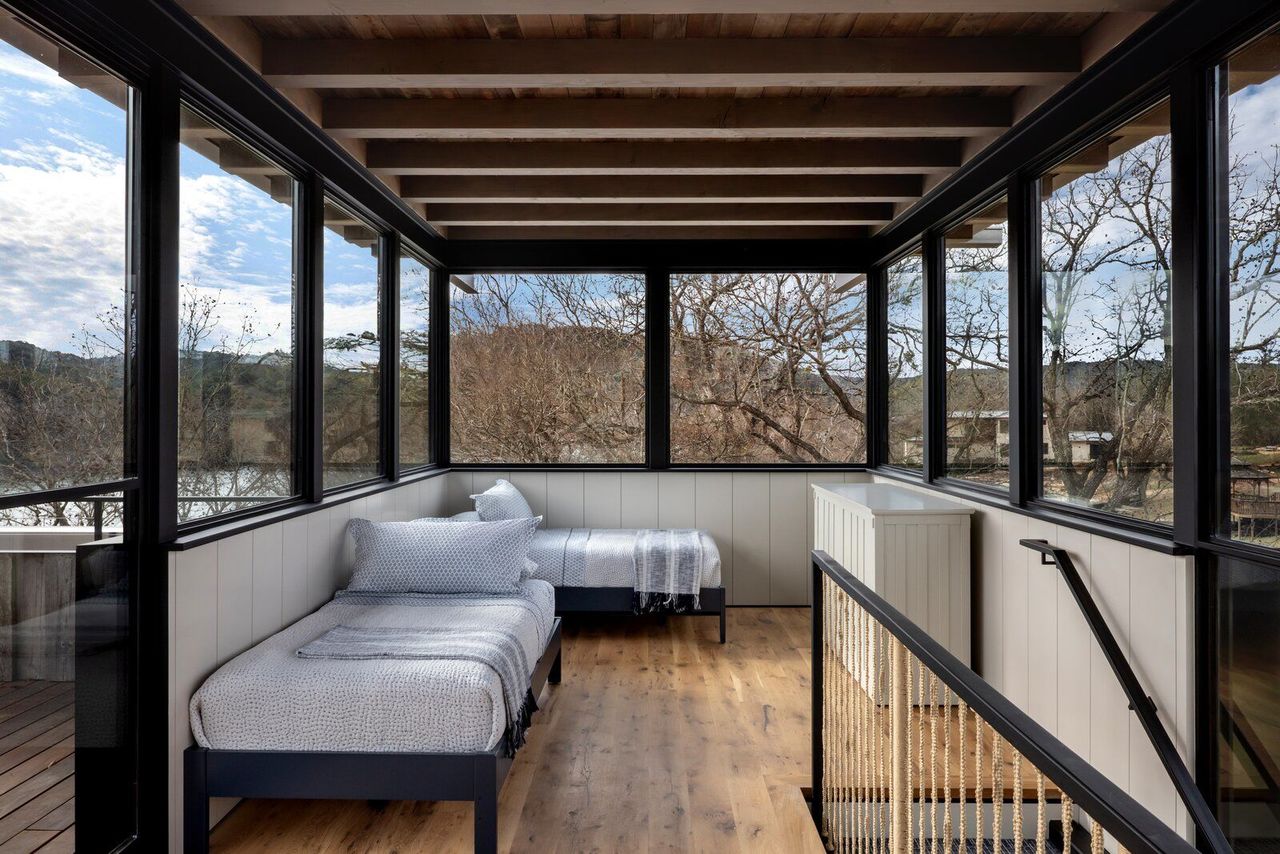 The couple’s daughters have beds on the lofty top floor of the tree house. 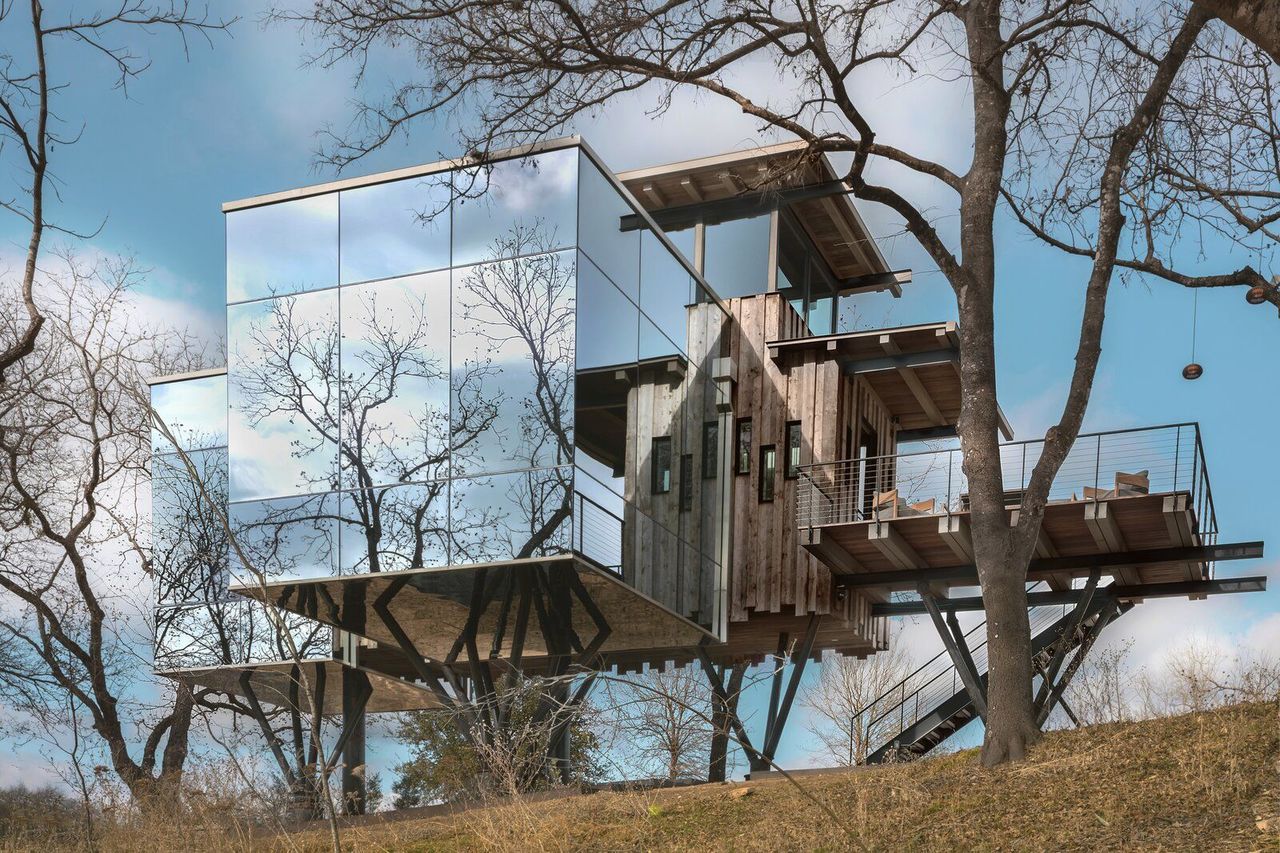 The panelized building system places minimal impact on the job site and the surrounding environment. 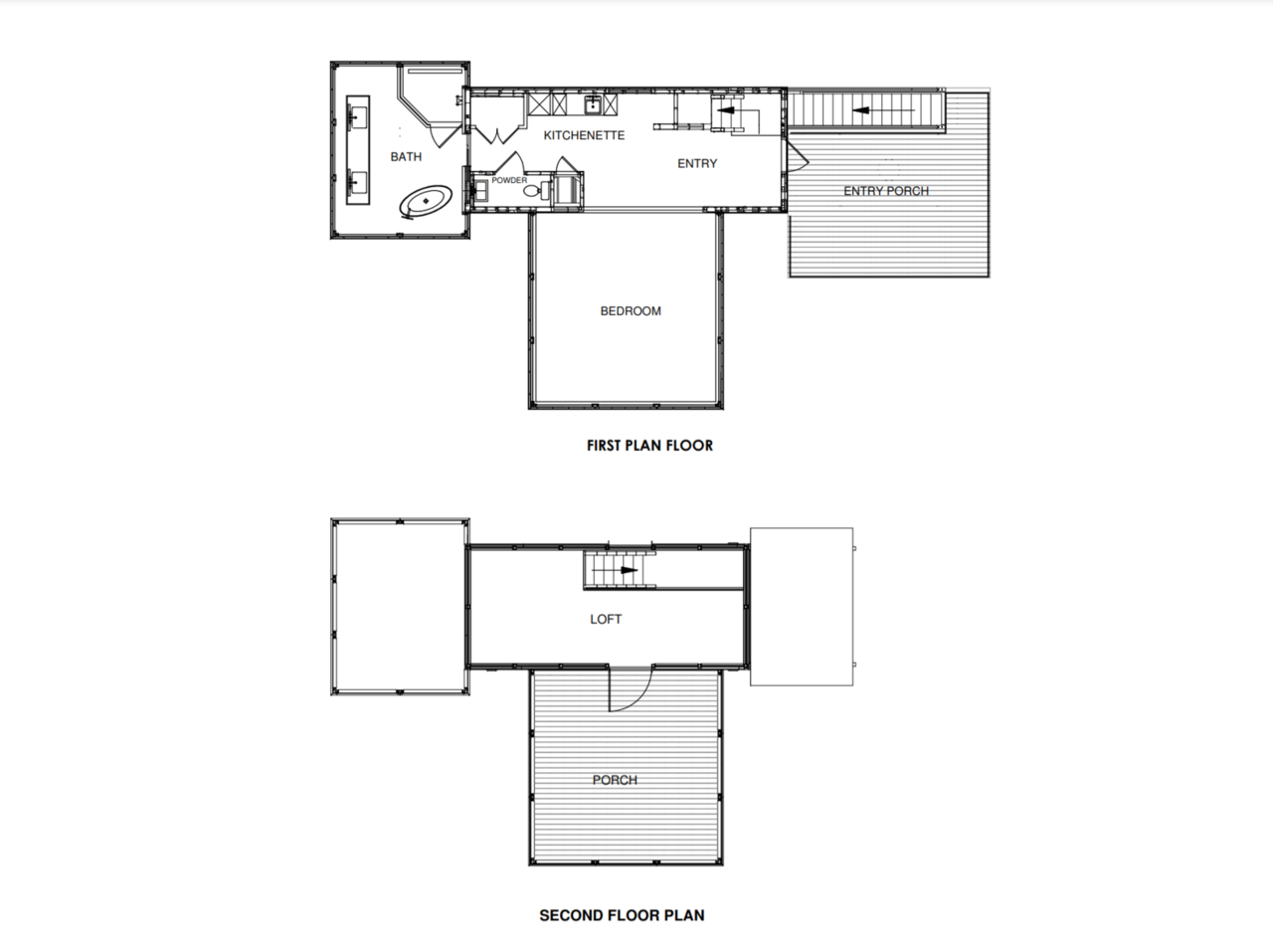