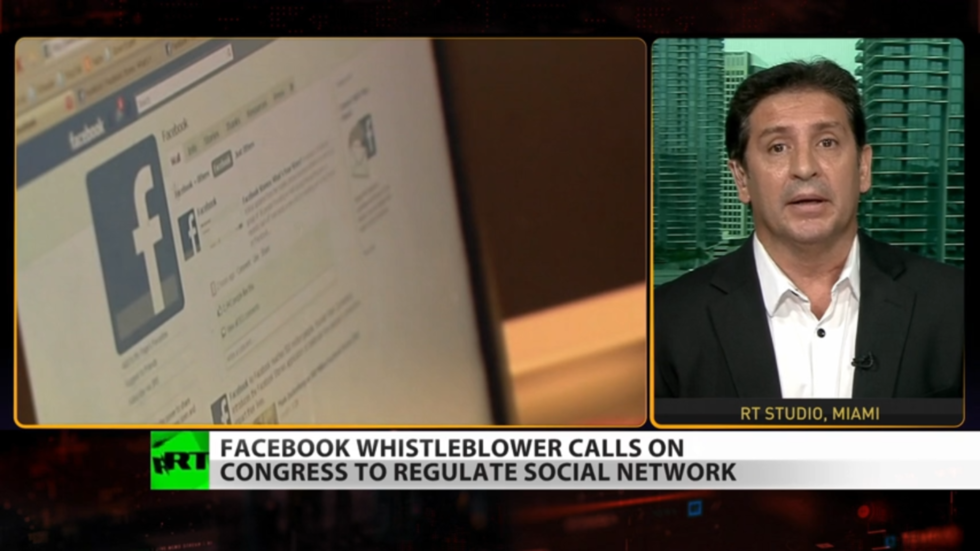 This is 'beginning of the end' for Facebook – cybersecurity analyst

She argued that the company places its $85 billion in annual revenue above the safety of its users, which is why congressional action is needed to curtail the social media giant lest it continue to “harm children, stoke division and weaken our democracy.” But if Facebook has proven itself unwilling to reign in its toxic algorithm, with whom do we charge that responsibility? Investigative journalist and “Boom Bust” co-host Ben Swann reports.

Then cybersecurity expert Wanderson Castilho of Enetsec shares his analysis of Facebook’s Monday outage and whether we can expect another one. He says it was likely the result of sabotage from the inside.

Syndicated columnist Ruben Navarrette then joins the discussion, and explains why he thinks Facebook’s deleterious impact on modern life is overstated by its critics and that the company is being "blamed for things beyond its control." Our host replies that comprehending the threat posed by Facebook comes from recognizing that “ideas are more dangerous than things.”

Meanwhile, new revelations from the bombshell Pandora Papers point to the nefarious bad actors, involved in a bevy of crimes from embezzlement to human rights abuse, for whom the US is happy to provide a financial safe haven for their filthy lucre. RT America's Alex Mihailovich has the details.

A massive oil spill left more than 100,000 gallons of oil off the coast of Orange County, California. An offshore pipeline operated by Amplify Energy has been shut down and is believed to be the source of the leak.

The spill affects a 13-mile area and has already taken an evident toll on the protected marshes and migrating sea birds there. RT America’s Mollye Barrows reports. Plus, a Russian actress and filmmaker blasted into space on Tuesday to film segments of “Challenge,” the first feature film to be shot on-site in space. RT America’s Trinity Chavez has the details.