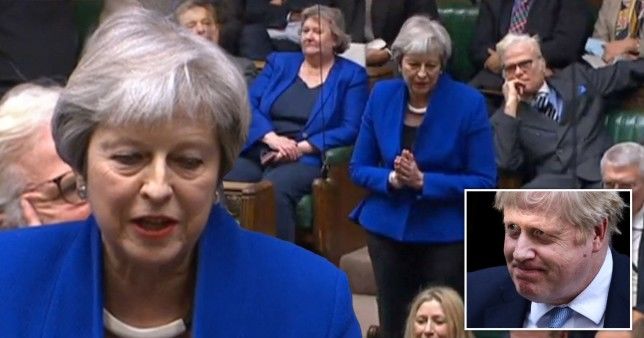 Theresa May has launched a rare direct attack on Boris Johnson in the wake of the Sue Gray investigation into alleged rule-breaking parties in Downing Street.

Speaking in the Commons on Monday afternoon, she demanded that he explain whether he ‘didn’t think the rules applied’ to him.

A partial report, published moments earlier, found evidence of ‘excessive consumption of alcohol’ and that staff ‘felt unable to raise concerns’ about breaches of Covid restrictions.

Some gatherings amounted to ‘serious failings’ and are ‘difficult to justify’, it concluded.

Ms May told MPs: ‘The Covid regulations imposed significant restrictions on the freedoms of members of the public.

‘They had a right to expect their prime minister to have read the rules, to understand the meaning of the rules, and indeed those around him to have done so to, and to set an example in following those rules.

‘What the Gray report does show, is that Number 10 was not observing the regulations they had imposed on members of the public.

‘So either my right honourable friend had not read the rules, or didn’t understand what they meant, and others around him, or they didn’t think the rules applied to Number 10.


Mr Johnson replied insisting ‘that is not what the Gray report says’, adding: ‘I suggest she waits to see the conclusion of the inquiry.

But the rebellion against Mr Johnson’s leadership soon appeared to be swelling again as backbenchers who had been reserving final judgment for after the Gray report began to break ranks.

He told MPs: ‘Ever since he joined the party’s candidates list 30 years ago until we got him into Number 10, he has enjoyed my full-throated support.


‘But I am deeply concerned by these events, and very concerned indeed by some of the things he has said from that dispatch box and has said to the British public.’

Mr Johnson said he ‘simply thinks that he is mistaken in his views’ and urged him to ‘reconsider upon full consideration of the inquiry’.

Ms Gray, the second-most senior civil servant in the UK, expressed her frustration at having to withhold a full report to avoid prejudicing the Metropolitan Police’s criminal investigation by making all evidence public.

She admitted the report was not a ‘meaningful’ analysis of the evidence she had gathered and was ‘extremely limited’ in what she could say about the events.

The Met commander overseeing the police investigation said officers had just received 500 pages of material and over 300 photographs and will be contacting people with questions about the events within weeks.