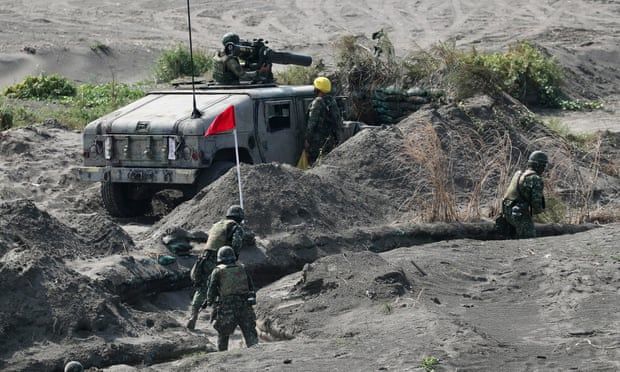 Boris Johnson has been challenged by his predecessor, Theresa May, as to whether the newly signed Aukus defence pact between the UK, US and Australia could lead to Britain being dragged into a war with China over Taiwan.

The intervention came during a Commons debate on the three-country agreement, under which the US and UK will share sensitive technology with Australia to allow it to develop its first nuclear-powered submarines.

The former British prime minister asked Johnson: “What are the implications of this pact for the stance that would be taken by the United Kingdom in its response should China attempt to invade Taiwan?”

In reply, the prime minister was careful not to rule anything out. “The United Kingdom remains determined to defend international law and that is the strong advice we would give to our friends across the world, and the srong advice that we would give to the government in Beijing,” he said.

Beijing has been adopting an increasingly aggressive stance towards Taipei, which has long received military support from the US. Military shows of strength are frequent: this month China sent 19 aircraft, including several nuclear-capable bombers, into Taiwan’s “air defence identification zone” on the eve of Taipei’s annual war games exercises.

The three western partners have tried to downplay the impact of the Aukus agreement on China, although nuclear-powered submarines will allow the Australian navy to match Beijing, with vessels able to submerge for months at a time.

Johnson also told British MPs the Aukus agreement was not aimed at the east Asian superpower, in response to a question from the opposition leader, Sir Keir Starmer.

The prime minister said: “He began by asking whether it was in any sense adversarial to China and how we would manage the relationship with China, and I think it is important for the house to understand that Aukus is not intended to be adversarial towards any other power.”

Starmer had asked: “What plan does the prime minister have to ensure that this new arrangement increases rather than decreases our ability to influence China?”

Australia will become only the seventh nation to possess nuclear-powered submarines – once the vessels are built in the next decade or so – and the first country to do so that does not have its own nuclear power, processing or weapons programme.

British ministers were also forced to placate an angry Paris, after it emerged that Australia had secretly chosen to cancel a A$90bn (£48bn) upgrade for French-designed diesel-powered submarines. “It’s really a stab in the back,” said France’s foreign minister, Jean-Yves Le Drian.

Ben Wallace, the UK defence secretary, said on Thursday that he understood France’s disappointment about the loss of the export deal, but stressed it was driven “by an Australian change in its capability requirement”.

He added: “If we all step back from it, France and Britain and the United States agree on so many things together. We agree on the same rules-based order, we agree on freedom of navigation, we agree on respecting human rights.”

Wallace said it was Australia that came to the UK seeking a deal earlier this year, following a secret yearlong study programme in which it concluded it wanted to abandon the French upgrade. “They approached us in March,” he said.

Both countries then went to the US. Johnson had joined the Australian prime minister, Scott Morrison, and the US president, Joe Biden, for a trilateral meeting on the sidelines of the G7 summit in Cornwall in June, where they discussed the deal in principle.

Australian sources said they expected the reactor cores, which rely on highly enriched weapons-grade uranium, to be built in the US or in the UK – where they are made by Rolls-Royce – but the final sites had yet to be decided pending an 18-month initial review.

It is also unclear where the Australian reactors will be decommissioned. In the UK nuclear-powered subs are taken out of service at the Devonport dockyard near Plymouth and the reactor cores taken to Sellafield in Cumbria.