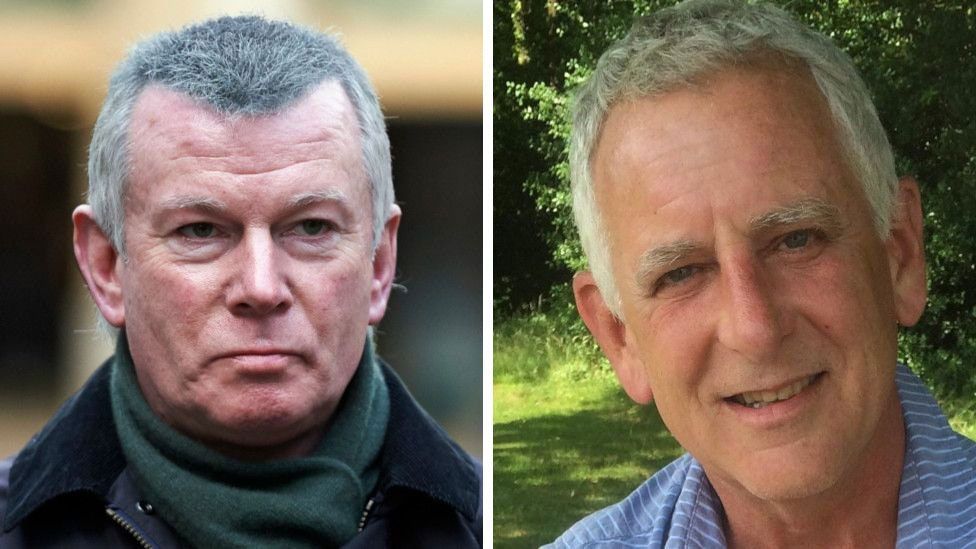 The whistleblowing bankers who were sent to jail

Two traders jailed for rigging interest rates were the original whistleblowers of the scandal, the BBC has learned.

Leaked audio recordings reveal Peter Johnson and Colin Bermingham alerted the US central bank to a fraud that the tapes suggest was directed from the top of the financial system.

But no senior figure was prosecuted. The Serious Fraud Office concluded the test for prosecution was not met.

Instead the whistleblowers were themselves sent to jail.

Audio recordings, obtained exclusively by BBC Radio 4, reveal Peter Johnson, known at work as "PJ", was repeatedly instructed by senior managers at Barclays to engage in the fraud, known as "lowballing".

It involved lying about the interest rates banks were paying during the financial crisis, pretending they could borrow cash much more cheaply than they really could.

The conversations, evidence of a criminal fraud in the midst of the worst financial crisis in eighty years, are part of a cache of secret audio recordings leaked to the BBC and revealed in The Lowball Tapes, a pioneering series investigating the secret history of interest rate "rigging".

They reveal that Johnson, convicted separately for manipulating rates on a much smaller scale, in fact tried to bring lowballing to the authorities’ attention, starting in 2007.

He repeatedly alerted the US central bank, the Federal Reserve (the Fed) to the fact that banks were lying about the interest rates they were paying to borrow dollars.

The stakes were high. This was at the beginning of the "credit crunch" – the early days of the financial crisis when banks were becoming afraid to lend to each other, and charging higher rates to reflect their fears.

In a few weeks, this would lead to the Northern Rock bank collapse, and develop into a financial crisis the following year.

For months, his campaign fell on deaf ears. While his immediate bosses were sympathetic, they said they were passing on instructions from above.

Against his vehement protests, Johnson joined in the same fraud he was seeking to expose, making dishonest statements about the cost of borrowing cash which did not reflect the real cost his bank was paying on the markets. 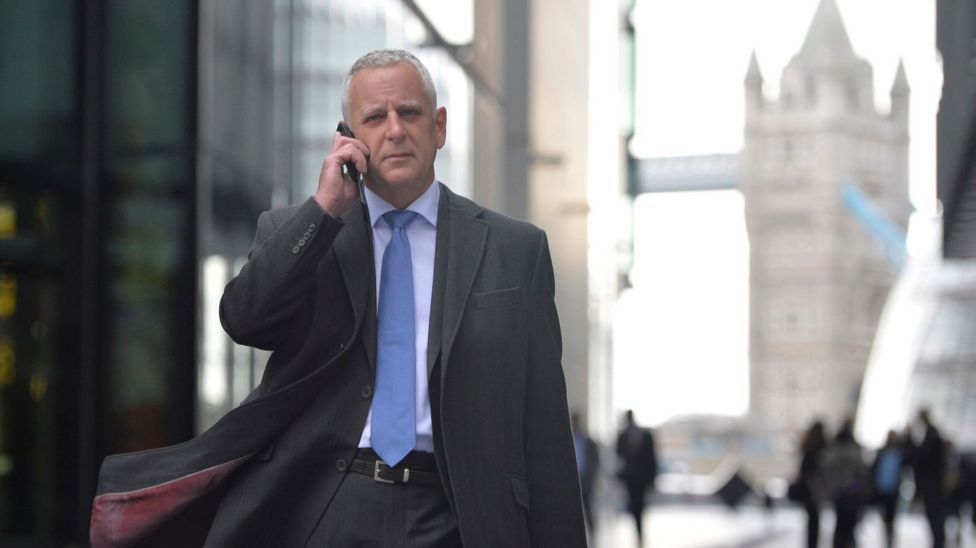 The recordings suggest board directors were concerned that if Johnson told the truth, it might look to journalists like Barclays was paying higher interest rates because it was desperate for money.

To avoid giving that impression, Barclays and other banks engaged in lowballing, a serious form of misconduct for which banks have since paid hundreds of millions in fines.

In November 2007, after months of pressure from his bosses to lie, Johnson vented his frustration on the phone to a 25-year-old colleague at Barclays’ Wall Street office called Ryan.

In an expletive-laden call, an extract of which is below, Johnson calls it “sick” and “wrong.”

Ryan: "Should be higher?"

Johnson also protested to his boss, Mark Dearlove, saying: "I think we should take a stand. I’m going to write you an email and you can do with it what you want."

Dearlove: "Ok, fair enough. You’re right 'cos I want to get something written down for the guys upstairs..."

Johnson wrote an email for Dearlove to circulate to senior management saying the bank was being "dishonest by definition". But that didn’t stop him being ordered to lowball.

What does ‘rigging’ Libor or Euribor mean?

What the FTSE 100 is to share prices, Libor is to interest rates – an index that tracks the cost of borrowing cash. For most of the past 35 years, 16 banks have answered a question every morning at 11am: At what interest rate could you borrow money?

They submit their answers (eg RBS estimates 3.14%, Lloyds 3.13% etc) and an average is taken to get Libor, short for "London Interbank Offered Rate". To set Euribor, the process is similar but with more banks involved.

The evidence against the traders jailed for rate "rigging" consisted entirely of requests they had made to colleagues to tweak those estimated interest rates up or down, typically by one hundredth of a percentage point (known on the money markets as a ‘basis point’).

The hope was that it might shift the Libor average marginally in the right direction to benefit the bank’s trades which went up or down linked to Libor.

In the other form of rate rigging, known as lowballing, banks pretend to be able to borrow cash much more cheaply than they really can. It is on a much larger scale.

Neither Johnson nor Bermingham has ever granted the media an interview. But the BBC has been able to piece together their extraordinary stories and hear the actual words they said because their phone lines, as is normal on banks’ trading floors, were recorded.

In the confidential tapes, we hear Johnson being told by his bosses that the need to fix interest rates came from above: first from senior managers at Barclays Bank, then from instructions from the Bank of England, then from the UK government, including Downing Street.

The tapes reveal that Johnson and Bermingham repeatedly blew the whistle to the US central bank about his and other banks publishing false estimates of the cost of borrowing cash, known as "Libor submissions".

On 11 April 2008, Bermingham alerted the Fed to what he regarded as a broken market, frankly telling them that Barclays, like other banks, is not posting "honest" estimates of the cost of borrowing cash. The Fed official says she understands fully and does not report a crime.

At the peak of the financial crisis, a few weeks after the collapse of the investment bank Lehman Brothers sent stock markets plunging, then Prime Minister Gordon Brown announced unprecedented emergency measures on 8 October 2008, including £50bn to recapitalise the banks.

On the same day, seven central banks from the US to Japan to Europe announced a co-ordinated cut in their official interest rates. Then RBS and Lloyds had to be rescued and nationalised.

But the real cost of borrowing cash, as measured by Libor, wasn’t dropping fast enough to show the emergency measures were working. 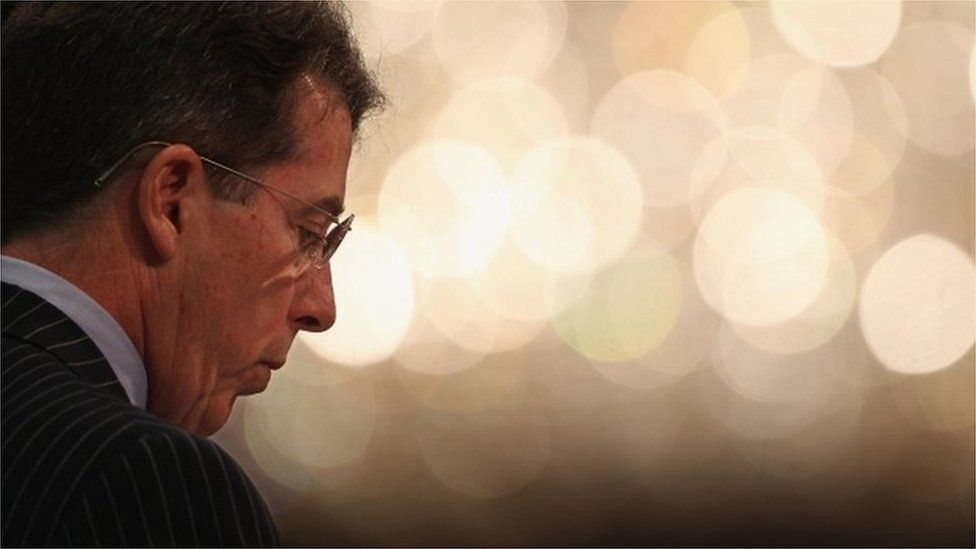 On 24 October 2008, Johnson told an official at the Fed about false rates being posted, saying "Please don’t believe it, it’s absolute rubbish."

On 29 October 2008, the then executive director of the Bank of England (BoE) Paul Tucker called Barclays chief executive Bob Diamond and told him that "senior figures" in Whitehall were asking why Barclays’ Libor rates were always too high.

Mr Diamond was concerned the government would think it meant that Barclays was struggling to get the funds it needed and had to be nationalised.

The same day, Johnson received a call from his boss Mr Dearlove, who told him: "PJ, you’re going to absolutely hate this... but we've had some very serious pressure from the UK Government and the Bank of England about pushing our Libors lower."

Agreeing it’s "the wrong thing to do," Mr Dearlove says, “I am as reluctant as you are... These guys don’t see it, they’re bent out of shape. They’re calling everyone…”

Both the US Department of Justice and the Serious Fraud Office had access to all the recordings obtained by the BBC, handed to them by Barclays’ legal department.

But they didn’t rush to find out more about all the evidence pointing to the top. Much of the evidence revealed in the tapes has never been published

Far from being thanked for their whistleblowing, Johnson and Bermingham were separately prosecuted by the UK's Serious Fraud Office (SFO) for taking part in a much smaller kind of interest rate "rigging" which in most countries of the world is not seen as criminal.

Both Johnson and Bermingham were convicted and jailed as part of what traders allege is a whole series of miscarriages of justice involving nine criminal trials on both sides of the Atlantic.

After initially defending himself, Johnson chose not to fight the charges and pleaded guilty in 2014 to conspiring to manipulate Libor.

Bermingham was found guilty in 2019 of conspiring to manipulate the sister rate of Libor, Euribor, and jailed for five years.

In all, 38 traders and brokers have been prosecuted, 24 of them in the UK and 14 in the United States, for “rigging” two benchmark interest rates, Libor and Euribor. In nine trials, seven of them in the UK, more have been acquitted than convicted as juries doubted the case against them.

None of the senior Barclays figures contacted by the BBC wanted to comment, but former Barclays boss Diamond has maintained there was no government or Bank of England pressure to lowball and has denied knowledge of it at the time.

The Bank of England has also denied that it put pressure on banks to lowball and stated that Libor was not regulated at the time.

The SFO said it carried out a thorough investigation into lowballing but concluded that the test for prosecution was not met.

The Federal Reserve declined to comment. But in a statement from 2012, it said it had received “occasional anecdotal reports from Barclays of problems with Libor” in 2007, and shared suggestions for reform with relevant UK authorities.

Libor is currently being replaced with a different method of setting market interest rates.