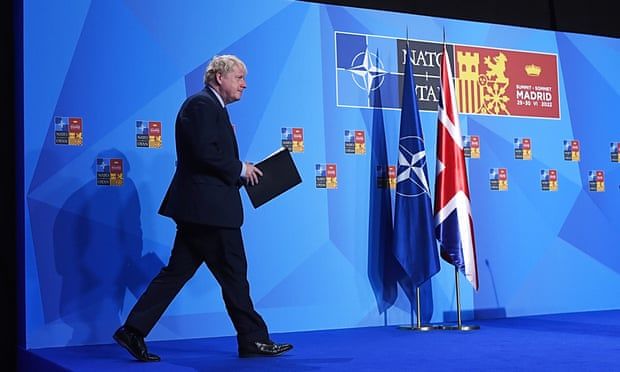 The week Boris Johnson lost his grip on power

After several days in the company world leaders, Johnson returned home to what would prove the beginning of the end

On Thursday last week Boris Johnson headed home from the Nato summit in Madrid having spent several days in the company of world leaders. At the preceding G7 in Bavaria, speaking loudly enough for the camera to pick up, he had joked: “Can we take our clothes off?” in a supposed riposte to an old shot of Vladimir Putin topless.

At Nato he had at least tried to think long-term, making a public promise to lift defence spending to 2.5% of GDP by 2030. Yet his premiership ended one week later – by which time the only military comment he would make was to privately compare himself to a Japanese soldier who had refused to surrender for 29 years after the second world war. The joke was remarkably apt.

The remarkable disintegration of his premiership began the moment he left the Nato photocalls behind. Chris Pincher resigned as a deputy chief whip the evening Johnson returned, after allegations that Pincher had groped two men at the Carlton Club in Westminster. The story was bad enough, but what followed was a disastrous series of evasions, half-truths – and even the sense that Johnson thought it all a joke.

Yet even that turned out not to be accurate as more complaints about Pincher emerged. Johnson’s former adviser Dominic Cummings, long waiting for the opportunity to land the final blow, suggested Johnson had known all along and had referred to his colleague as “Pincher by name, pincher by nature”.

More damning evidence was to follow. On Tuesday morning a former senior Foreign Office civil servant, Simon McDonald, said there had been a similar previous incident involving Pincher when he as a junior Foreign Office minister in 2019, and that Johnson had been “briefed in person about the initiation and outcome of the investigation”.

Jason Groves, the political editor of the pro-Tory Daily Mail, began that day’s briefing for lobby journalists by asking the prime minister’s spokesperson: “Will you be telling the truth?” – prompting a somewhat embarrassed civil servant to reply that they provided “the information available to me at the time of each meeting”.

Johnson toured the tea rooms to try to salvage the situation. But as the Conservative MP Gary Sambrook revealed on Wednesday at prime minister’s questions, Johnson sought to blame everybody bar the perpetrator.

According to Sambrook, Johnson said: “There were seven MPs in the Carlton Club last week, and one of them should have tried to intervene to stop Chris drinking so much.”

Sambrook was applauded as he called on him to resign, but by then it was already clear Johnson’s premiership was in the end game – even if Johnson was the last to see it.

The night before, Sajid Javid and then Rishi Sunak had resigned, releasing similar statements nine minutes apart that focused squarely on the issue of Johnson’s character.

“The British people rightly expect integrity from their government,” Javid wrote in a statement published at 6.02pm.

Sunak wrote: “The public expect government to be conducted properly, competently and seriously.” The statements looked coordinated even if both camps denied it.

Resignations of mostly junior ministers carried on at an extraordinary rate on Wednesday, the first coming while the new chancellor, Nadhim Zahawi, was doing a broadcast media round in the morning, and continuing through to the Welsh secretary Simon Hart at 10.33pm. By midnight the final departure count was more than 40.

It had been an easy day for Keir Starmer. At prime minister’s questions the Labour leader read out an account from a victim of Pincher – “he slowly moved his hand down in front of my groin” – in the deliberate style of a prosecutor. Then he pressed Johnson on why the former whip had been promoted in the first place.

From teatime ministers began converging on Downing Street, mostly to demand Johnson’s head, and a handful to encourage him to stay. The prime minister saw them individually. Even Priti Patel, the normally loyal home secretary, said she thought he could not carry on.

It was expected that Johnson, having taken the temperature of his most senior colleagues, would conclude the game was up, as had Margaret Thatcher a generation before. There was even a scheduled early evening phone call with the Queen. But, remarkably, Johnson concluded for a moment that he could fight on.

In a final show of frustration and flexing of his waning power, he sacked Michael Gove from the cabinet while Gove’s children and ex-wife Sarah Vine were watching Love Island. According to Vine, a columnist for the Daily Mail, Gove told her: “The prime minister rang me a few minutes ago and told me it was time for me to step back. I said respectfully: ‘Prime minister, if it anyone should be stepping back it is you.’”

Downing Street said Gove had had to go because “you can’t have a snake who is not with you on any of the big arguments”. That night the Sun was told that Tory rebels would have to “dip their hands in blood” if they were going to force out a prime minister who had won an election in December 2019.

A night’s sleep and the fightback was over, although some could not wait. Michelle Donelan resigned as education secretary shortly before 9am on Thursday, after about 36 hours in post. She told Johnson it was the only way to “force your hand”. Had she waited the length of a maths lesson, she might have changed her mind.

With more and more resignation letters landing on the doormat on Downing Street, officials stopped taking calls from journalists on Thursday morning, prompting the immediate suspicion that it was finally all over.

Johnson apparently got up at 6am to write a resignation speech, in which he would blame the “herd instinct” for his departure rather than any particular misjudgment – over Pincher or parties or propriety.

It fell to the BBC’s new political editor, Chris Mason, to tell the nation, taking a phone call from Downing Street while live on Radio 4 shortly after 9am.

On his return to the microphone, with a guest gently moved aside, a cool Mason said simply: “The prime minister has agreed to stand down.”