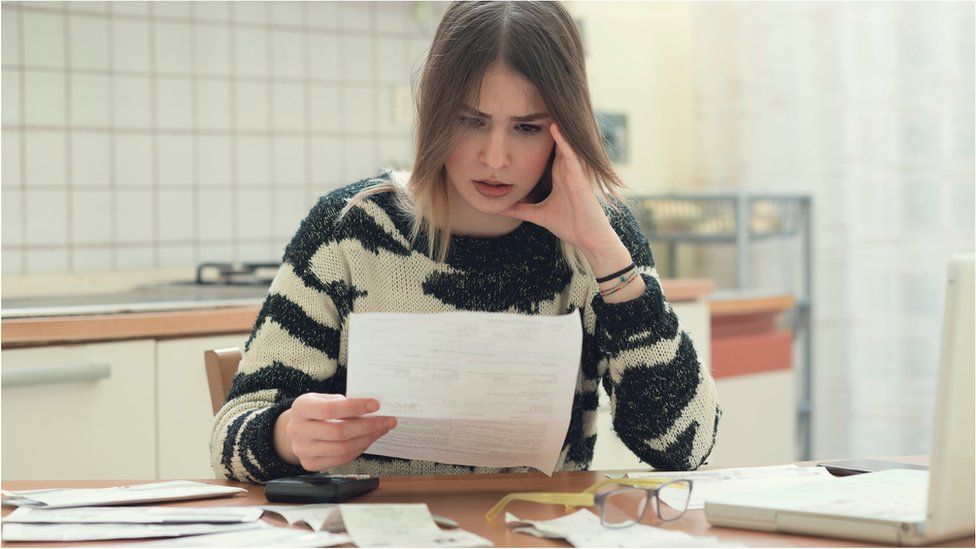 The government has cut the amount of benefits universal credit claimants lose if they earn money.

But this can still leave claimants effectively paying very high rates of tax.

In fact, they can end up taking home a smaller proportion of an extra £1 earned than someone earning £150,000 a year. 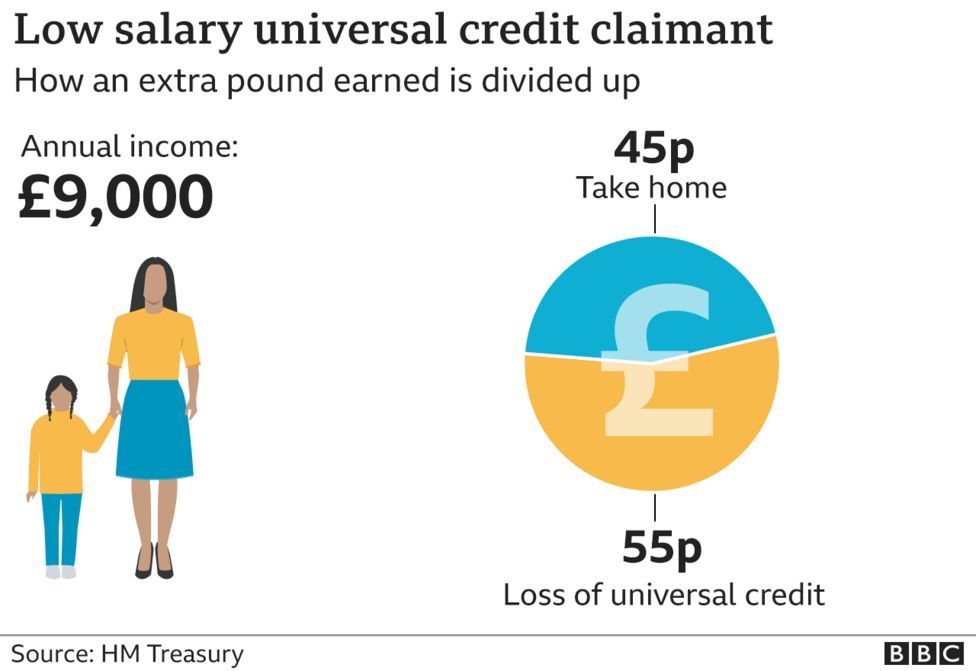 Before the chancellor cut the taper rate, a universal credit claimant earning £9,000 a year from a part-time job would be taking home 37p of an extra £1 earned.

Now, that rises to 45p - but that is still the equivalent of a pretty high tax rate. 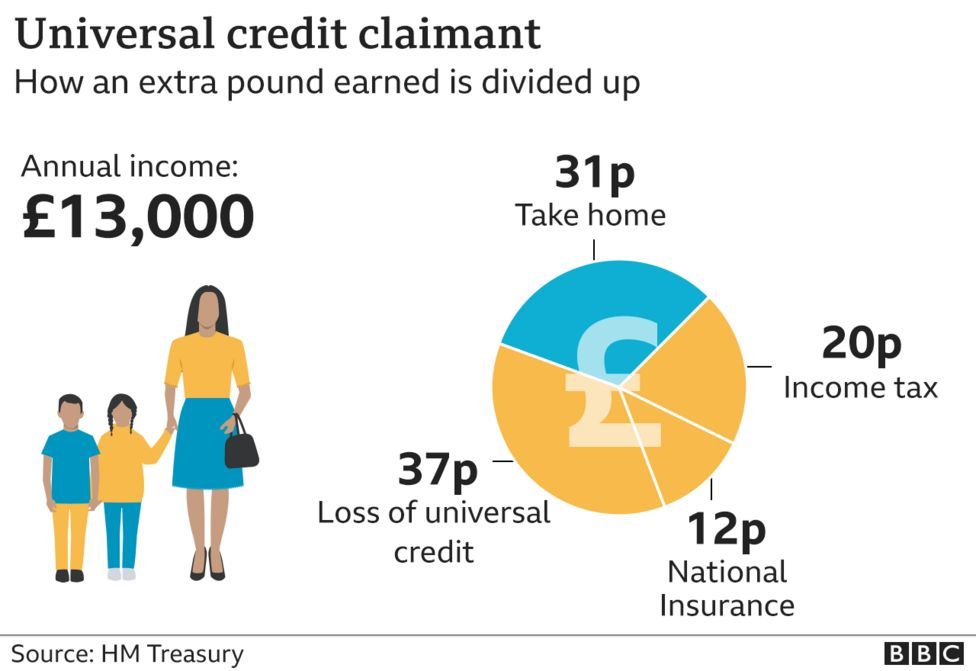 Now consider an employee, for example a parent, earning enough to pay income tax - so at least £12,570 a year - but still entitled to universal credit.

Even with the lower taper rate, they are still taking home only 31p of an extra £1 earned.

The taper rate is applied after income tax and National Insurance have been paid, which is why, in this example, it is taking 37p of an extra £1 earned and not 55p.

Income tax rates and bands are slightly different in Scotland. There is a 19% starter rate for income tax between earnings of £12,570 and £14,667. But in this case, that would still leave our worker taking home 31p of an extra £1 earned.

Child benefit is paid to families to help with the costs of raising children.

Consider someone with three children, earning £50,500 a year.

The loss of child benefit means for an extra £1 earned, they take home 32p. 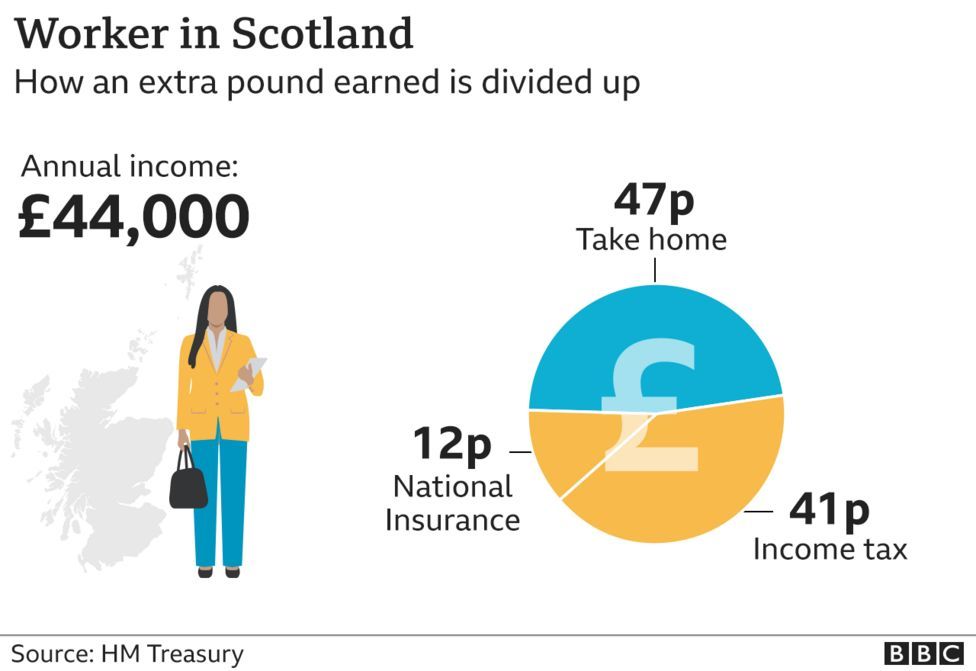 In Scotland, people start paying the 41% higher rate of income tax when they are earning £43,663 a year.

In the rest of the UK, employees earning that much would be paying only 20% income tax, so would take home 68p of an extra £1 earned - 21p more than their Scottish counterparts.

People do not have to start paying income tax until they are earning more than £12,570 a year.

This is called the personal allowance.

But the personal allowance is withdrawn at a rate of £1 of allowance for every extra £2 earned above £100,000.

So those earning more than £100,000 a year start paying tax on part of their earnings they did not previously have to pay tax on. 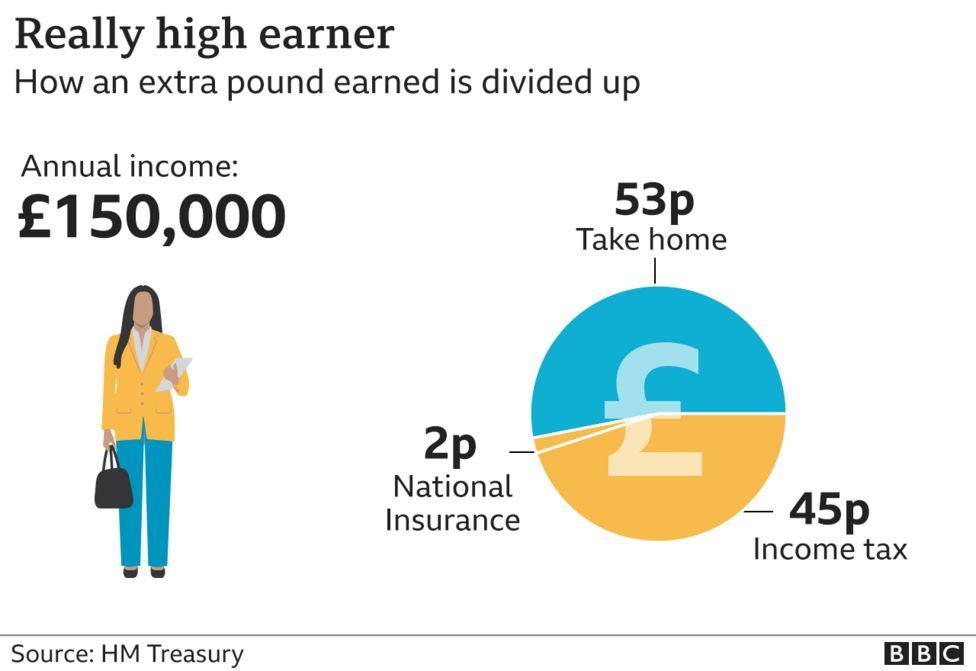 All of these people are taking home less of an extra £1 earned than somebody earning more than £150,000 and paying what is supposedly the top rate of tax.

That person would take home 53p of an extra £1 earned.

Bear in mind all of these figures are the current rates - National Insurance rates will be rising in April.

We asked the Treasury why some workers pay much higher rates of tax than people earning considerably more but have not received a reply.

For example, if you earn less than £50,270 and your husband, wife or civil partner earns less than £12,570, they can use marriage allowance to transfer £1,260 of their income tax personal allowance to you.

But if you earned an extra £1, putting you on £50,271, you would no longer be eligible for marriage allowance, leaving you almost £252 a year worse off.

Cliff edges also occur with other schemes, including the personal savings allowance and tax-free childcare.