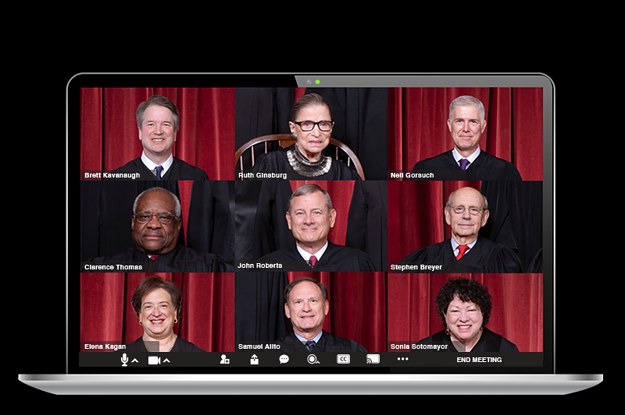 The Supreme Court Is Delaying Arguments Again - Why Don’t They Just Do A Videoconference Like The Rest Of Us?

One group is launching an ad campaign urging the justices to hold arguments over releasing President Donald Trump’s financial records via teleconference.
The Supreme Court on Friday once again postponed oral arguments in several major lawsuits, this time for its April session, leaving high-profile legal disputes in limbo due to the coronavirus pandemic.

The delay affects a number of cases slated for in-person debate inside the Supreme Court Building, including a trio of lawsuits about disclosing President Donald Trump’s financial records; arguments were originally slated in those cases case for this week.

The roadblock has frustrated activists who say the court must adapt on urgent matters of national interest. The nine justices already hold video conferences for their weekly closed-door conferences - prompting a growing cry to simply hold oral arguments with a videoconferencing service.

In an effort to break the logjam, progressive advocacy group Demand Justice is planning a social media ad campaign on Monday that targets about 100,000 people around Washington, DC, arguing the court must hear the president’s financial records cases, collectively referred to as Trump v. Mazars.

Lower courts had ruled against Trump in those disputes, saying he must hand over a trove of records, possibly even his tax filings, but the Supreme Court put the brakes on those decisions last fall.

Spokespeople for the Supreme Court did not reply to inquiries from BuzzFeed News about when the justices would announce a plan to hear the postponed cases or if anything stopped them from holding arguments online.

In a Friday press release, the Supreme Court said “if circumstances permit in light of public health and safety guidance” that it “will consider rescheduling some cases” slated for the April session and for the March session, which had already been postponed, before the court’s annual term ends in early summer.

The court implied possible workarounds - without elaboration - noting that it “will consider a range of scheduling options and other alternatives if arguments cannot be held in the Courtroom before the end of the Term.” The press release also said justices will “continue to proceed” with cases in which they have already heard oral arguments. They will post those opinions online.

“Canceling in-person oral arguments was absolutely the right decision,” Fallon said, “but millions of Americans have figured out how to adjust to a public health emergency while completing time-sensitive tasks from home. Any delay from Roberts is about his desire to cover for Trump, not technical limitations.”

Fix the Court, a nonpartisan advocacy group, is making a similar argument. “This is getting ridiculous,” Gabe Roth, the group’s executive director, said in a statement Friday. “If the Supreme Court can conduct its weekly conferences remotely, which it has been doing for weeks, it can conduct its remaining arguments remotely and allow the public to listen in.”

A stimulus bill passed last week by Congress included a half-million dollars for the Supreme Court.

"The country has adapted to working over Zoom, Skype, and Google Hangouts, and dozens of state and federal courts are keeping the wheels of justice moving via teleconferencing in spite of the pandemic,” Roth said. “The Supreme Court should be no different.”

The three major lawsuits over Trump’s financial records - likely including his tax forms, which he declined to make public during his last presidential campaign - test the rights of sitting presidents to stonewall investigations from prosecutors and congressional lawmakers. Several other cases also stand in limbo, including a case involving Little Sisters of the Poor, a Catholic group, that debates whether expanding religious conscience exemptions under the Affordable Care Act’s birth-control mandate was legal.
Add Comment