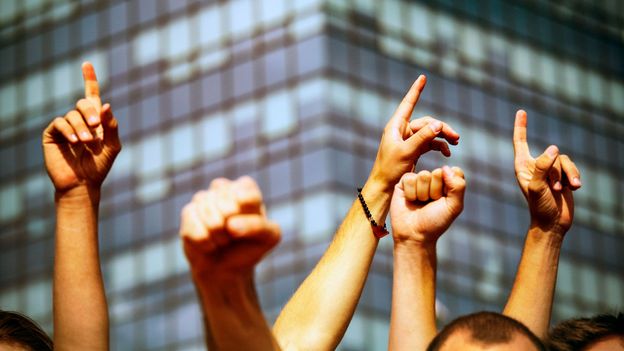 The rise of the anti-work movement

Many employees are frustrated with the nature of employment. But some fed-up workers are asking a bigger question: what’s the purpose of work?

Chris, a US-based IT professional, says he’s experienced terrible working conditions in his recent roles. He says two separate employers, one offering no sick pay and the other only a week’s worth of paid time off, forced him back to work despite illness. At other labour-intensive jobs, he says he’s ended up having to treat his own wounds.

But it was a role in customer support that pushed him too far. His job, which paid less than $13 (£9.40) an hour, involved verifying whether peoples’ dependents qualified for health-care insurance. He says he would have been fired if he had given callers certain helpful information he was not authorised to disclose, like how much time they had to submit their paperwork.

“There were people literally begging for their lives on the phone, and I couldn’t do anything about it,” he says. “That broke me to a point where I realised that absolutely nothing in this system is working… It’s the lack of empathy and human kindness. I’m not sure how that went missing.”

Two years into the pandemic, employees across the globe are tired. Poor mental health and burnout are common, particularly among low-wage and essential workers. This prolonged period of uncertainty has made many re-examine the role their employers play in making matters worse; record numbers of workers are leaving jobs in search of better options.

But some people are going further, wondering aloud if there’s purpose to their work – or the economic system itself. These people are part of the ‘anti-work’ movement, which seeks to do away with the economic order that underpins the modern workplace. Anti-work, which has roots in anarchist and socialist economic critique, argues that the bulk of today’s jobs aren’t necessary; instead, they enforce wage slavery and deprive workers of the full value of their output.

That doesn’t mean there would be no work, however. Supporters of the anti-work movement believe people should self-organise and labour only as much as needed, rather than working longer hours to create excess capital or goods.

A few years ago, anti-work was a radical, fringe idea, but the pandemic incarnation of this movement has grown faster and become more well known outside these political circles. It’s centred on the r/antiwork subreddit, a community still rooted in direct action, but whose focus has both softened and broadened into a wider dialogue on working conditions as its popularity has grown. Today, it contains a mix of personal narratives about quitting, creating change in hostile workplaces, advocacy for ongoing labour strikes, labour organising and ways people can try to advocate for themselves.

The community has grown rapidly. At a time when worker dissatisfaction and labour rights are under intense scrutiny, how significant is the growing interest in this movement – and could it help play a part in effecting change?

Chris helps moderate the r/antiwork subreddit, which currently has 1.7 million subscribers as of this writing (up from 100,000 before March 2020). “We have a steady growing membership of between 20,000 and 60,000 followers a week. We have a ton of growth and a tonne of engaged members. We get hundreds of posts and thousands of comments every single day,” adds Doreen Ford, another moderator.

The subreddit’s name and philosophy draw from multiple sources. Ford says one is Bob Black, an anarchist philosopher, whose 1985 essay The Abolition of Work built upon preceding thoughts on labour – a history Black asserts goes back to ancient Greek philosophers Plato and Xenophon. “Many workers are fed up with work … There may be some movement toward a conscious and not just visceral rejection of work,” writes Black, suggesting people do only necessary work and devote the rest of their time to family and personal passions.

Believers in anti-work are not necessarily against all forms of labour. Rather, the overarching sentiment is hostility towards “jobs as they are structured under capitalism and the state”, according to the subreddit’s FAQ. “The point of r/antiwork is to start a conversation, to problematise work as we know it today,” it continues. 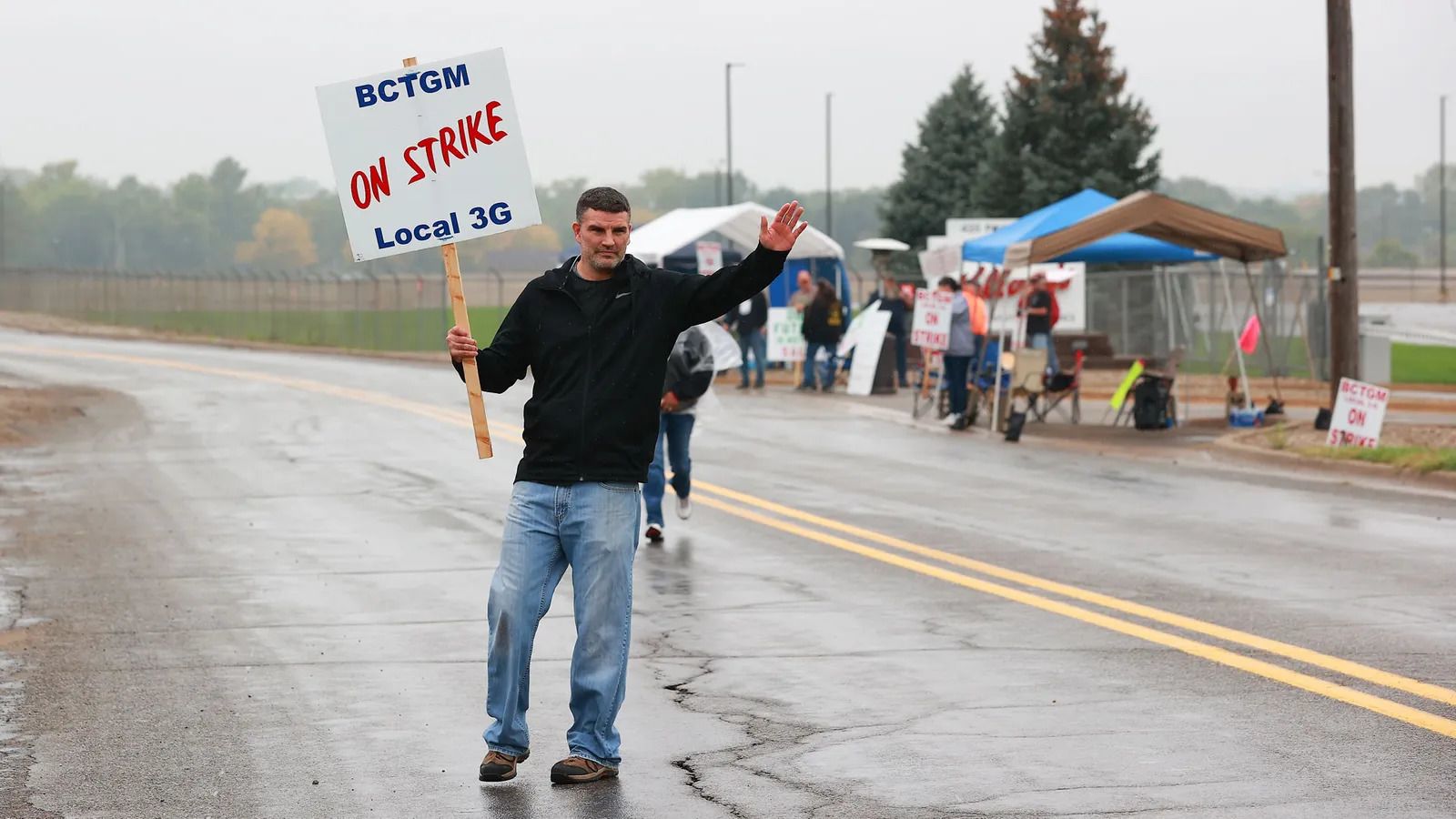 Some r/antiwork users share ideas on how to support strike efforts, including late last year during the Kellogg's labour dispute

Today, while these ideals remain central to the movement, the subreddit’s focus has widened to encompass more general labour rights. Users share stories of employer abuse, ask for advice on how to negotiate better pay, contribute memes or post news updates about ongoing labour strikes. Participants also offer tips on how users can support strike efforts. In December 2021, members of the subreddit helped efforts to flood Kellogg’s job application portal when the company broke off negotiations with striking unionised workers and said it would hire new, non-union workers. Although it's unclear how much r/antiwork's members directly influenced the company's actions, later that month, Kellogg’s and the union reached a deal.

The community also provides links to literature and podcasts about the anti-work movement beyond Reddit. The majority of posts come from US workers across all genders and occupations, although there is a global presence as well.

‘An interruption of work as we knew it’

Although the anti-work movement itself isn’t novel, it has garnered newfound attention.

“With Covid there was an interruption of work as we knew it,” says Tom Juravitch, a professor of labour studies at the University of Massachusetts, Amherst, US. “In moments like this, people have time to reflect. Working has been degraded for so many people. The authority structures that we’re in have gotten more draconian and more controlling than ever. People really felt that in a new way.”

For blue-collar workers, Covid-19 brutally exposed deep inequalities; low wages, a lack of paid sick leave, requirements to be in customer-facing environments with inadequate workplace safety measures that left people vulnerable to contracting Covid on the job. Workers at all income levels, meanwhile, have struggled to juggle work pressures with family responsibilities caused by shuttered schools, leading to increased burnout, mental health issues – and, for some, existential questioning.

Yet Kate Bronfenbrenner, director of labour education research and a senior lecturer at Cornell University, US, notes that while Covid-19 has been a major propellant, the current anti-work movement has deeper roots that predate the last two years. “Workers have had an amazing threshold for tolerating the abuse that employers have put on them,” says Bronfenbrenner. “But when that abuse went so far as to risk their lives, that crossed the line; in the context of Covid, where employers were asking them to work harder than ever and employers were making huge profits.”

Of course, not every disillusioned worker will embrace anti-work. It’s clear swaths of workers are seeking out new roles aimed at securing better conditions. Others are quitting or choosing to work for themselves. But some are trying to advocate for change. “People aren’t all quitting,” says Bronfenbrenner. “Some are saying they’re going to fix it by organising, striking or standing up.”

In moments like this, people have time to reflect. Working has been degraded for so many people – Tom Juravitch

It’s still too early to tell whether this online community might have measurable impacts on labour rights, whether through louder, more impassioned conversations or other disruptions.

Fundamentally changing work overnight is unlikely, but we are experiencing an unprecedented shake-up in terms of how workers do their jobs and the kinds of conditions they are expecting from employers in return. It’s clear many workers are at their breaking points – and there are already signs that employers who fear widescale employee attrition are starting to respond with incremental improvements. If anti-work and its ideological cousins continue to gain numbers, this may give employers – and perhaps even politicians – further pause for thought.

At the same time, it’s important to look at how the anti-work movement has played out in the past. One parallel is the “long seventies”, a period of inflation and economic recession in the US, which compelled many labour leaders – and in many cases, wildcat strikers – to walk off the job and ask for more than just pay rises from employers. Their demands also included better working conditions from bosses as well as changes in union leadership.

However, this movement didn’t gain widespread traction. An energy shortage and worsening unemployment took the steam out of efforts to radically alter the state of work, particularly as employers asked unions for deeper concessions to contend with lost profits amid a dramatic recession. The power of labour petered out as “the fear of loss of security at work” undermined the movement of the time, says Leon Fink, professor of history at the University of Illinois at Chicago.

People aren’t all quitting. Some are saying they’re going to fix it by organising, striking or standing up – Kate Bronfenbrenner

Fink adds economic shifts and the decline of the boom economy ultimately eroded the increased leverage workers had to sustain longer-lasting change. Similarly, future economic conditions as well as how power evolves in the workplace will affect the direction of today’s anti-work movement.

Still, past labour movements suggest moments of opportunity can lead to some change, even if that change may be short-lived or incremental. “I think that there’s a real possibility for some traction” with the current anti-work movement, says Juravitch. He points towards the implications of the Occupy Wall Street movement, which “continue to reverberate through all other kinds of grassroots movements”.

Ford is optimistic. “It’s starting a lot of conversations. It feels like a big moment for us.”

Chris looks at the anti-work movement as a small part of what he hopes will be a bigger effort to dismantle the state of work entirely – even if he doesn’t see this happening in his lifetime. “Hopefully I can make it easier for the people who come after me.”