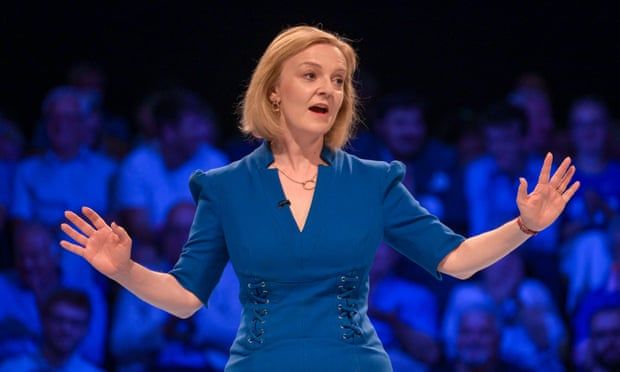 Analysis: Truss’s misjudgement earns her comparisons to Theresa May in blunder critics say could have proved fatal in general election

The most popular meme being shared by Rishi Sunak’s Conservative MPs on WhatsApp after Liz Truss’s U-turn was the fateful image of Theresa May’s “nothing has changed”, which became a defining image of the 2017 election.

Many of the former chancellor’s backers were quick to dub Truss’s policy the “new dementia tax”, which dogged May’s campaign and turned her MPs against her.

In a comment clearly intended to invoke this previous trauma, his campaign spokesman said that if the U-turn had occurred during a general election campaign it could have been a “potentially fatal own goal for the Conservatives”.

Scenting blood, both Labour and the Liberal Democrats were already preparing attack adverts for MPs in marginal seats who had backed Truss. Her U-turn was being predicted hours before it arrived, the first real howler of the campaign.

It might not change the wind for Sunak – May won the 2017 election after aborting the unpopular social care reform. But it was a key reason why she lost her majority and it raised grave doubts in the minds of her colleagues about her political judgment.

Truss’s plans for regional pay boards and savings of £8.8bn, which experts pointed out would mean swingeing pay cuts for all public sector workers, are likely to evoke similar unease. There is also a lingering question about whether there was sufficient scrutiny of the policy before it was hoofed out to journalists. The release talked about a “war on Whitehall” and plans to make efficiencies in the civil service.

But when reporters and external experts questioned how Truss could save £8.8bn from a civil service pay bill that is around £9bn in total, the background notes from the campaign made it clear that it was “the potential savings if the system were to be adopted for all public sector workers in the long term”.

Sources on Sunak’s campaign said they believed the sums had been lifted wholesale from an earlier report from the Taxpayers’ Alliance, which made it clear it should apply to the whole of the public sector – without exception.

Truss’ campaign say it was never meant to apply to the public sector after all – but cannot then say how the sums add up to make the same savings.

One former aide recalled officials in Number 10 had jokingly nicknamed the Department for International Trade the “Ctl C, Ctl V” department when it was run by Truss. Some around Sunak have suggested there has been a similar mistake made with this policy – Truss’s campaign have not commented.

But Truss has long been interested in regional pay boards since her time as chief secretary to the Treasury, which means her insistence that the figures have been taken out of context or misinterpreted is unlikely to put an end to the matter.

Governing when a significant number of your parliamentary colleagues have significant doubts in the back of their minds about your abilities and judgment is difficult – as Boris Johnson and Theresa May found. Already, Sunak has more backers in the parliamentary party than Truss, even though she has a string of new eye-catching endorsements and is steaming ahead with members.

There is another lesson too for this leadership campaign. Over the course of the campaign both sides have been punting gradually more and more unworkable policies in order to win over Conservative members.

The reams of ideas from both campaign – including hard right policies on jail sentencing and immigration – have been subject to very little real scrutiny thus far. Without more serious thought in the coming weeks, either candidate could stumble into a similar embarrassing blunder.