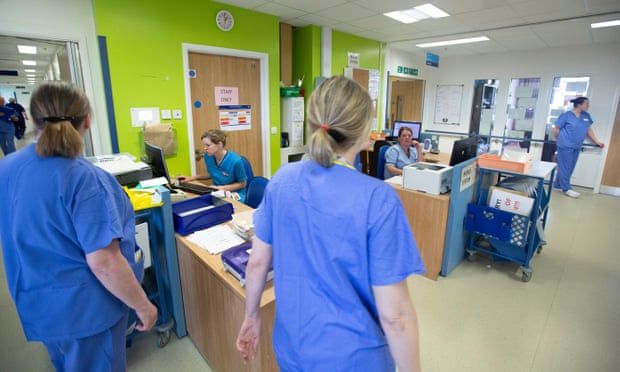 The Guardian view on attacks on NHS staff: a grim and growing problem

Editorial: Rising levels of aggression directed at nurses and others can only worsen the crisis facing the health service
What a difference a year makes. This time last year, the country had not long ceased its weekly clap for carers. This ritual had its detractors (who thought it sentimental, or that extra pay would be preferable), but it focused attention, and gratefulness, on a cohort who were bearing the brunt of the Covid-19 pandemic.

The pandemic is not over, but earlier this month a survey found that more than a third of doctors have recently experienced verbal abuse and sometimes physical threats. In hospitals, it was most often nurses who were abused, while 96% of GPs had seen it happen to receptionists. Midwives report being physically threatened. Some NHS workers are beginning to hide their badges in public.

Part of the reason for this behaviour, it has been suggested, is pent-up demand for treatment, frustration with changed service protocols and waiting lists: 5.3 million people are awaiting treatment, the most since records began, and there are fears that the number could be seven million by the end of the year. Medics share patients’ fears about the consequences. The British Heart Foundation has warned that delays could result in needless deaths. There is also a small but vocal number whose aggression stems from anti-vax views. Medical practices reminding patients to get vaccinated have received high volumes of abuse. A former nurse who, at a rally in London, compared NHS workers to doctors tried at Nuremberg is being investigated by police.

For NHS staff, this rising antagonism comes on top of mental health challenges and burnout at previously unheard-of levels: a survey in April found a 300% increase in the highest levels of stress, anxiety and depression. Staff who were female, on the frontline, young or managers were especially likely to report “severe psychiatric symptoms” (three-quarters of NHS employees, and 90% of nurses, are women); healthcare workers from minority ethnic backgrounds were 50% more likely to be suffering from post-traumatic stress disorder. A House of Commons report found workforce pressures had increased exponentially, with huge amounts of additional, unpaid work being undertaken.

All attacks on people doing their jobs are unacceptable. But the levels of hostility being directed at healthcare staff are especially grim. The risk goes beyond individual instances too; one former head of NHS England, Sir David Nicholson, has warned that the loss of taxpayers’ confidence in the NHS that could result from the inability to access care is the greatest threat to the service’s future. The answer is not to encourage personal “resilience”, but to invest: the NHS will not return to its previous form without substantially increased funding to boost staffing levels, training and support. The NHS urgently needs the kind of wholehearted care that any seriously ill Covid patient in this country has come to expect.
#COVID-19  #Covid
Add Comment