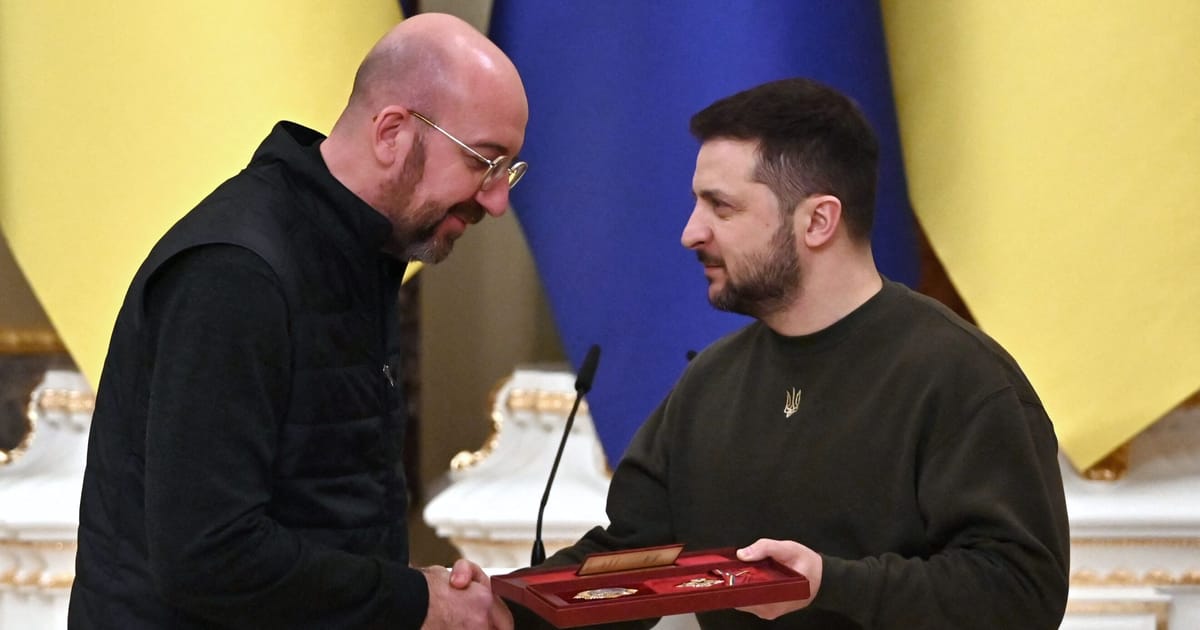 The EU is leading Ukraine into a sovereign debt crisis

Brave and economically ravaged Ukraine needs a debt deal to win the coming peace — and grants rather than loans.
European leaders haven’t been shy about trumpeting their €18 billion in loans to Ukraine in 2023 as a tool for“maintain[ing] the macro-financial stability of the country.”For European Council President Charles Michel, such aid shows that Brussels is “very committed to supporting Ukraine as much as we can.”

However, as the war rages and pressure on Ukraine’s economy mounts, basic economics — and centuries of history — paint a much less optimistic portrait of the real impact of Europe’s financial support.

The reality is that brave, bombarded and economically ravaged Ukraine needs a debt deal to win the coming peace. And if Kyiv is to have a realistic chance of a post-war recovery, this deal should include significant debt restructuring and the transfer of tens of billions of euros in non-repayable grants.

With an inflation rate of 26 percent, interest rates of 25 percent and a one-third decline in Gross Domestic Product (GDP) in 2022, Ukraine is reaching the limits of existing, conventional economic policy.

Soon, Kyiv will have to resort to the printing press to finance daily public services. And as the Germans, the Dutch and others often like to remind Europe, this will lead to economic catastrophe.

Ukraine has already deferred payments until 2024 on up to €20 billion of its debt held by international investors. And while the approximate €6 billion that the country has saved through this action is important, it pales in comparison to its expected budgetary shortfall of approximately €40 billion in 2023 alone.

The €18 billion worth of loans from the EU will eventually have to be repaid, starting in 2033, and loading on more debt — even of the long-term, practically zero interest variety — reduces Ukraine’s potential for quick recovery from the war. It’s also a nonsensical economic approach, given that Kyiv has already suspended payment on some of its existing obligations.

Overall, the EU’s strategy is simply a recipe for a future Ukrainian sovereign debt crisis.

Remarkably, for all the bombast in Europe about a “Marshall Plan for Ukraine,”it is the United States — not the EU — that has correctly learned from its economic history.

The U.S. has already provided over $13 billion in non-repayable grants to Ukraine, with a further $14.5 billion due in 2023. And this U.S. aid is in addition to the tens of billions of dollars it is spending on military support.

As uncomfortable as it may be, Brussels — and Berlin — know all too well that it was the debt relief granted to Germany in the late 1940s, which laid the foundation for Europe’s post-war economic miracle: A return to economic growth, which eventually led to the creation of a prosperous European Economic Community in 1957.

This “inner core” of the original Marshall Plan wrote off Germany’s post-1933 debts and enabled West Germany to start off with a debt-to-GDP-ratio of under 20 percent, following the London Debt Agreement of 1953. Originally designed as a temporary arrangement, it was solidified upon German reunification in 1990.

It was understood, at the time, that a wartime economic crisis required a pragmatic and flexible political response — just as it does now.

Alas, the EU’s response to financing Ukraine has been anything but historic.

The bloc has allowed its internal splits on economic policy — which were ironically crystallized by German reunification and the creation of the euro — to undermine its strategic objectives in Ukraine. And while it continues to be haunted by the ghosts of Greece and stalked by Hungary, the European Council is unlikely to ever approve a meaningful grant-aid, debt-reduction package for Ukraine.

As a result, the country’s long-term financial sustainability remains compromised by the EU’s decision-making dissonance.

In this context, it is individual EU member countries that should be taking the lead in supplying bilateral grant aid to Ukraine. Although the European Commission is eager to place itself at the head of all EU aid efforts, this is a case of aspirational leadership rather than actual discernible effectiveness, particularly given the delays — and member country squabbling — in distributing existing support.

Direct bilateral grant aid to Ukraine should thus be exempt from the eurozone’s self-imposed budgetary constraints. And unused EU aid in member countries — ranging from the common agricultural policy to the Cohesion Fund — should be permitted to be sent as non-repayable financial support to Ukraine, should any member so wish.

Taking its history and economic scale into account, it’s Germany that should take the lead. And if Berlin can’t overcome its current phobias, it should — at the very least — facilitate other EU member countries that want to follow the U.S. approach.

There will come a time for the political and economic reforms so beloved by Brussels to be proactively linked to future financial support for Ukraine — but now is just not the time.

Both the EU and Germany need to acknowledge their own economic history or, failing that, step aside and let the U.S. and Britain save Ukraine’s economic future. Otherwise, one of the biggest tragedies of this war may well end up being Ukraine’s disillusionment with Europe.
Add Comment