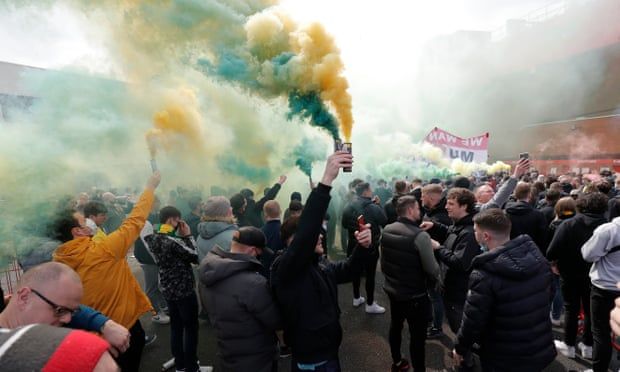 ‘The beautiful game is gone’: Manchester reacts to fan protests

Outside the Lowry Hotel, people are unsure if demonstrations will work but united about their necessity
There’s a new bit of graffiti on the Trinity Bridge dividing Manchester and Salford: “Fuck United” reads the scrawl on one of the suspension pillars.

It faces the Lowry Hotel, where the Manchester United team were surrounded by angry fans on Sunday, before others broke into Old Trafford, causing the game against Liverpool to be postponed.

A little further down the River Irwell, an advertising hoarding has blocked off access to the water while yet another luxury tower block is being erected. Someone has sprayed “Fuck capitalism” in a neat cursive script over the anti-climb paint. It appeared a few days before Sunday’s protests but is a demonstration of the same tensions: a battle for the heart of a city and the soul of one of its beloved football clubs.

Paul was one of 200 fans who managed to delay the team bus leaving for the game on Sunday. “It wasn’t just a bunch of lads in their 30s protesting at Old Trafford,” he said, asking for his surname to be withheld. “It was women, grandparents, whole families. There was one little old woman in a United face mask wanting her voice heard.” The protests achieved their aim, he said: “Now the whole world is talking about it.”

He insisted it wasn’t just about forcing out the club’s unpopular owners, the Glazer family. “If the Glazers sell then it will just be bought by Saudi Arabia or Elon Musk. All billionaires are the same. What we want is some sort of representation on the board, a voice. To not have the piss taken out of us, basically.”

Fans gathered outside the Lowry again on Monday. This time they were waiting for the stars of Paris Saint-Germain, in town to play Manchester City, and clutching shirts to be autographed rather than flares and protest banners. Dan Blackburn, a United fan from Wirral, had brought his 15-year-old, and reflected on the latest developments at his club and its unpopular owners: “95% of protesters were doing it for a proper reason, but you’ve always got a few idiots and those are the ones who end up in the papers.”

Sheltering from the rain underneath Trinity Bridge, two residents of the apartments next to the Lowry discussed Sunday’s drama. Fans surrounding the hotel is nothing new – José Mourinho racked up a bill of at least half a million pounds after staying in the hotel for 895 days as United manager – but Sunday was different, said one man, who asked not to be named. “We are used to crowds and fans here, because loads of famous people stay here … but the flares really kicked things off and the smoke came into our building,” he said.

He felt the fans were fighting a losing battle. “Football is all about money. People have this misconception that it’s called the beautiful game. That’s long gone. It’s all about big money for the people at the top. And the people who keep feeding it, who go through the turnstiles, are they going to be able to make any difference? No, not really,” he said.

“But how else are they going to make their voice heard? They aren’t allowed in the board room. They have no voice. The people who make the decisions are not interested in hearing them. The people at the top are the ones who have the prime minister’s mobile phone number.”
#Elon Musk
Add Comment