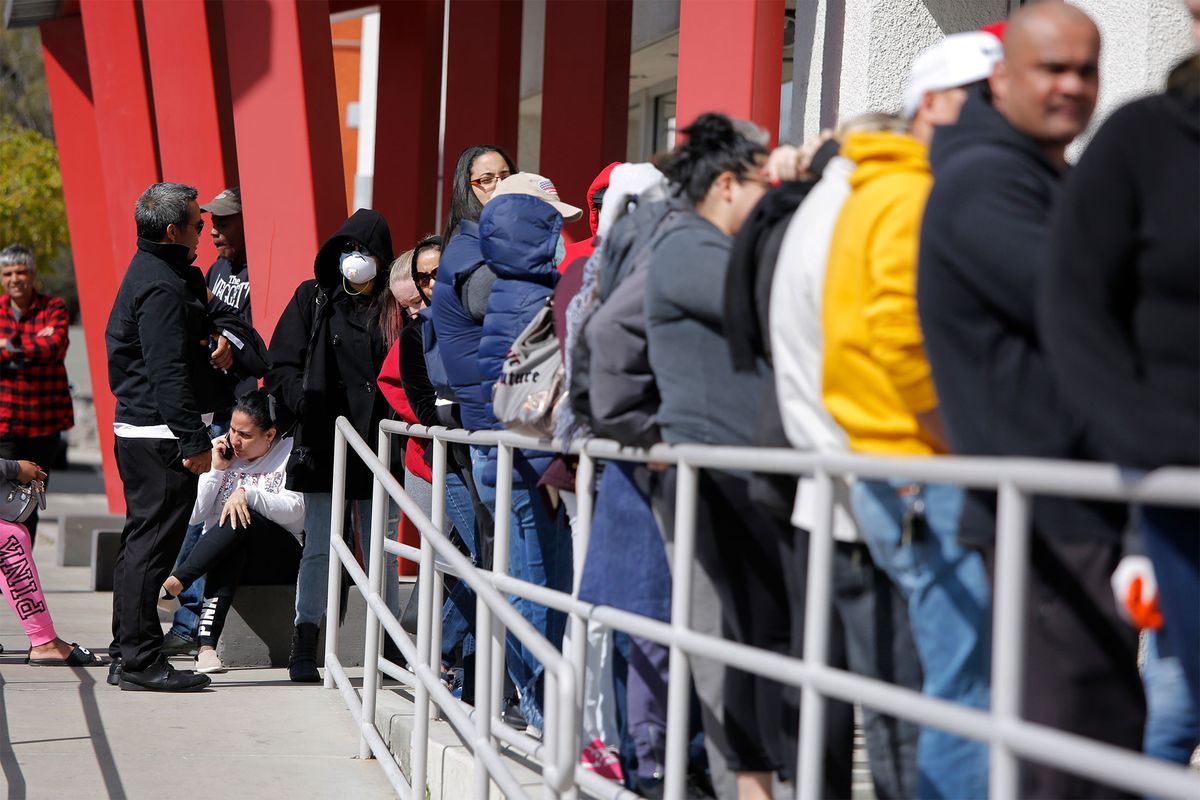 The 50 richest Americans now hold almost as much wealth as half of the U.S., as Covid-19 transforms the economy in ways that have disproportionately rewarded a small class of billionaires.

New data from the U.S. Federal Reserve, a comprehensive look at U.S. wealth through the first half of 2020, show stark disparities by race, age and class. While the top 1% of Americans have a combined net worth of $34.2 trillion, the poorest 50% — about 165 million people — hold just $2.08 trillion, or 1.9% of all household wealth.

The 50 richest people in the country, meanwhile, are worth almost $2 trillion, according to the Bloomberg Billionaires Index, up $339 billion from the beginning of 2020. 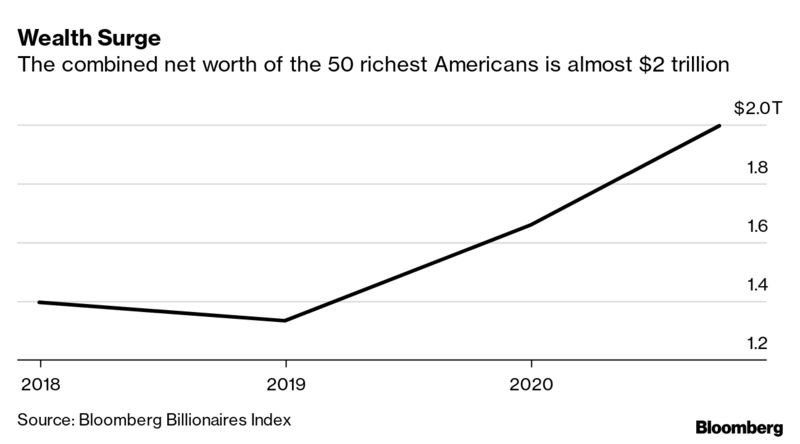 Covid-19 has exacerbated inequality in the U.S., with job losses falling heavily on low-wage service workers and the virus disproportionately infecting and killing people of color. Meanwhile, many upper-middle class professionals are working from home, watching their retirement accounts rise in value after the U.S. Treasury and Fed pumped stimulus into the economy and markets.

Another key reason for the wealth disparity is that the vast majority of Americans aren’t benefiting from rising stock prices. The bottom 90%’s exposure to the stock market has been dropping for almost two decades. Since peaking at 21.4% in 2002, upper middle class Americans have seen a 10 percentage point decline in their equity interest in companies. A similar pattern is seen among the bottom half.

The wealthiest 1% own more than 50% of the equity in corporations and in mutual fund shares, the Fed data show. The next 9% of the wealthiest own more than a third of equity positions — meaning that the top 10% of Americans hold more than 88% of shares. 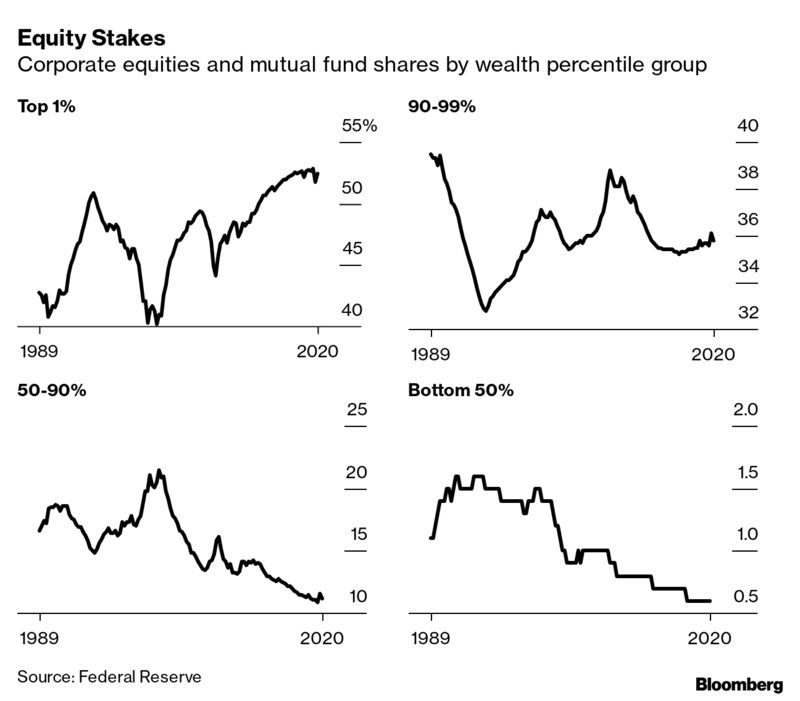 The Fed data also show that the Millennial generation, born between 1981 and 1996, control just 4.6% of U.S. wealth even though they are the largest in the workforce with 72 million members. And the share of the pie held by Black Americans is the same size it was 30 years ago.

Like the country as a whole, young Americans’ wealth is concentrated in just a few hands. Three Millennials — Facebook Inc. co-founders Mark Zuckerberg and Dustin Moskovitz, along with Walmart Inc. heir Lukas Walton — personally control one out of every $40 held by their generational cohort.

“The pandemic is further widening divides in wealth and economic mobility,” Fed Chair Jerome Powell said Tuesday, warning that the country’s recovery will weaken without more government aid. “A long period of unnecessarily slow progress could continue to exacerbate existing disparities in our economy.”

A few hours after his address, President Donald Trump told negotiators to halt talks with Congressional Democrats on another relief package until after the November election.

Those whose fortunes are tied to tech companies — which profited from the shift of work, shopping, entertainment and socializing online — have been among the biggest beneficiaries of the Covid-19 economy. Leading the way is Amazon.com founder Jeff Bezos. His fortune, the world’s biggest, has jumped 64% in 2020 to $188.5 billion. On Wednesday alone, Bezos added more than $5 billion to his net worth.

White Americans hold 83.9% of the nation’s wealth, compared with 4.1% for Black households, the data show. While White Americans’ share of the total has dropped somewhat as the nation becomes more diverse, Black people hold the same percentage as in 1990.

Of the 25 richest Americans, only one is not White — Eric Yuan, the chief executive officer of Zoom Video Communications Inc., whose fortune has risen almost seven-fold this year to $24.2 billion.

The Fed data show that Gen X, those born between 1965 and 1980, has made some progress building wealth in recent years, doubling their collective net worth since mid-2016. 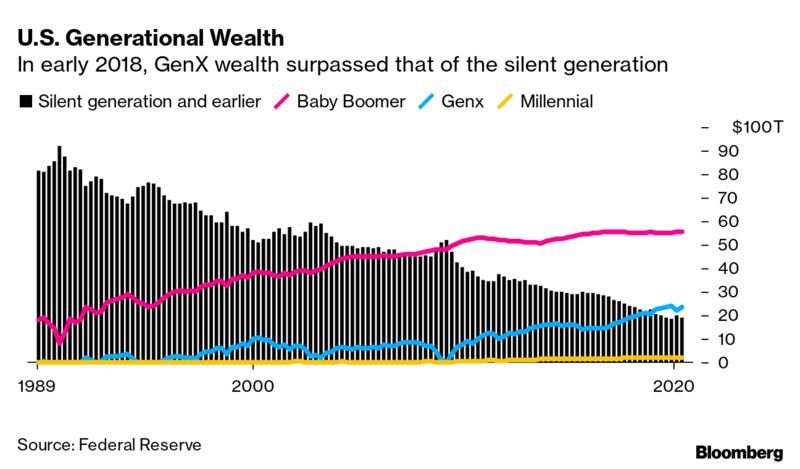 It’s not unusual for younger age groups to be significantly poorer than their elders. Even so, Millennials remain far behind where previous generations were at the same age. In 1989, when the median Boomer was 34, the generation controlled more than 21% of U.S. wealth. To match that, Millennials, with a median age of 32 now, will need to quadruple their wealth share over the next couple of years.

Young and lower-income workers got a glimmer of hope in recent years as median wages started to rise faster than inflation. But this year a spike in unemployment threatens to derail this progress, returning the U.S. to the trend of the past few decades, when wealth has flowed steadily to the top.

Adam Jett 142 days ago
Really obscene distribution of wealth. This will destroy the USA over time if not corrected.
View all comments (1)Add comment